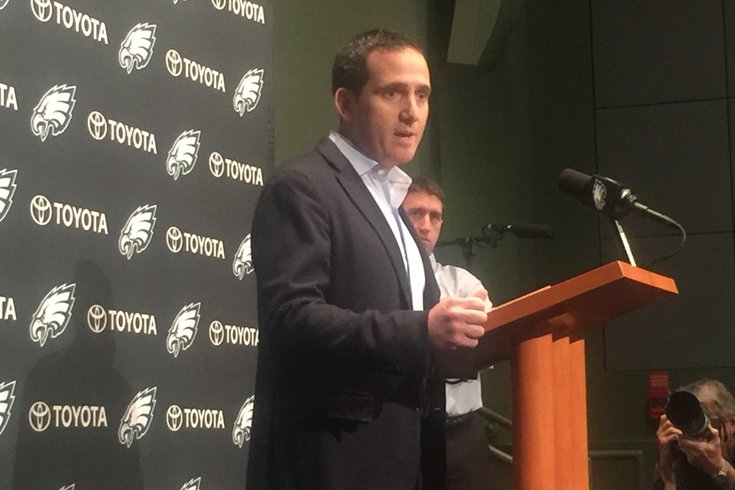 Howie Roseman spoke for 30 minutes to reporters in his season-ending press conference.

Before Howie Roseman even began taking questions from reporters, he opened his season-ending press conference by touching on a number of points that he wanted to address.

He congratulated Brian Dawkins and Terrell Owens for making it as finalists for Hall of Fame induction this season. He thanked the fans. He noted that the Eagles have found their franchise quarterback in Carson Wentz, and began to surround him with new offensive linemen, found both in the draft and free agency.

And then he also mentioned a front office move that will become more important now that the season is over. That was the addition of VP of Player Personnel Joe Douglas, who the team hired away from the Baltimore Ravens after the draft last year.

"Off the field, we made a huge addition," Roseman said. "Bringing Joe Douglas here with his insight, with his leadership, his ability to lead the draft room, his ability to put the free agent board together, we think he's going to be a huge addition for this staff. He's already added valuable input into what he's looking for in players, what he thinks he can bring to this team, and we can't wait to see what he has in store for us in March."

Douglas won't just be setting the free agent board for the Eagles. According to Roseman, Douglas will also set the board for the 2017 NFL Draft.

"He's got a way of looking and evaluating players that is different than what we've done in the past, and quite frankly we needed that," Roseman said. "He has full rein to set the draft board. He's involved in every discussion we have about building this team and I think we'll start seeing dividends. We saw some of them with our waiver cuts and I think we'll continue to see dividends as we go through the offseason."

So how is the way Douglas looks at it different than the way the Eagles have looked at it?

"I think when we look at the success the Ravens had, and certainly they’ve won two world championships since the start of the century, what they’re looking for and the traits they’re looking for in particular positions fits the way that this city is built, too," said Roseman. "We want to find whatever ways there are to improve this team and to improve the quality of players on this team, and I'm really confident that we have the right people in our scouting staff to do that."

Still, ultimately, the draft will Roseman's responsibility, for which he should remain accountable, good or bad. Roseman acknowledged that final decisions are his.

"It's a collaborative effort when we talk about who we are picking," he explained. "And at the end of the day, the responsibility is mine."

Historically, the most common criticism of Roseman has been his lack of success in finding enough impact players in the draft. It appears as though Douglas will have a big role in who the Eagles select in the 2017 NFL Draft.