Seeking input on state of Philly schools, City Council gets an earful

Testimony: $300 million budget cut in 2011 has had lasting consequences 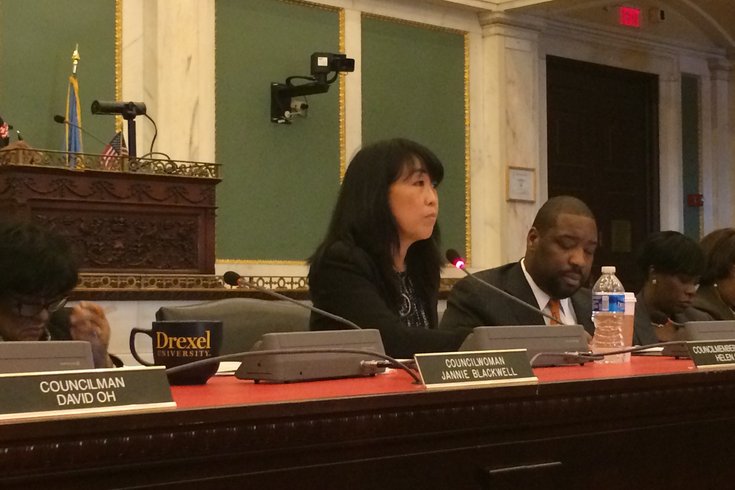 City Councilwoman Helen Gym joined fellow council members on Thursday during a public hearing on the state of Philly's schools.

City Council members on Tuesday listened to parents, employers and experts discuss the state of city schools, specifically to learn the impact of a $300 million cut in state funding in 2011 under the watch of former Pennsylvania Governor Tom Corbett.

They got an earful.

For almost five hours, council's Education and Children and Youth committees heard testimony about many of the issues that affect the school district, mostly due to budget cuts.

Councilwoman Helen Gym, chair of the Children and Youth committee, said the meeting was the first in a series of four community hearings that will be held through next month. During Thursday's hearing, four panels of attendees detailed the lingering impact of those cuts.

Karyn Lynch, the district's chief of student support services, opened the meeting by saying the district is doing as much as it can with its budget.

"We have done so much with so little," she said.

Oh noted that Farah Jimenez, acting chairwoman of the School Reform Commission, was scheduled to attend the meeting but canceled at the last minute. The district, he added, was to have shared budget figures with council, but sent the numbers by email just 20 minutes before the start of the hearing.

"The SRC needs to step up," he said. "I don't see that a plan has been advanced. I've never seen a plan... I need to know what they are doing to get money."

Lynch said she would take his concerns back to the SRC.

Gym also questioned Lynch about just how much money the district would need to address some of the issues raised Thursday. For example, Gym noted that 123 district schools lack a full-time nurse. District-wide, that's about 1,100 students for every full-time nurse.

Could every school have a staff nurse for a cost of about $13 million, Gym asked, saying she'd heard that's what it would cost.

Lynch said she wasn't sure.

Gym then asked whether the 49 schools in the district without full-time guidance counselors could be staffed for a total of about $3.7 million.

Lynch said she wasn't sure, but Gym's figure sounded "a little low."

Gym wondered why, if the shortage of nurses and guidance counselors could be addressed for less than $20 million, hadn't the SRC taken care of the issue earlier. She said the SRC needs to provide more detail and transparency with its spending.

Two school nurses testified that they worry students aren't getting the personalized care they need. And a pair of district guidance counselors talked about the issues they face.

Leroy Williams, a guidance counselor at Furness High School in South Philadelphia, said that for a while, he was assigned to support students at nine schools in the district – seven elementary schools and two high schools.

"How is that possible?" he asked.

Williams teared up while telling a story about how he got a scar on his head from running into a wall as he chased a suicidal student.

"That student today, female, is in the United States Marine Corps," he said.

It's important for schools to have counselors because many students come from homes with family problems, or they may have been abused and need someone they can trust at school, he told council.

Others testified that more needs to be done for students who attend English Language Learning classes.

Jerry Jordan, president of the Philadelphia Federation of Teachers, told council that by outsourcing the hiring of substitute teachers to a company called Source4Teachers, the district is failing students.

He said the company's failure to fill vacancies has led to overcrowded classrooms and overworked teachers who need to fill in when there are no substitutes.

"Source4Teachers has failed miserably," he said. "It's absolutely an abomination."

During the meeting, some raised Mayor Jim Kenney's hopes to create community schools – which would bring city services, like health care programs, to district schools – as a way to address some problems.

Kate Shaw, executive director of Research for Action, a Philadelphia-based educational research organization, pointed out that a community schools plan would offer benefits as well as expenses she called cumbersome.

Cincinnati, Ohio, which Kenney and city officials recently visited to learn about community schools, took out a $1 billion bond in order to pay for the program there, Shaw said.

"Community schools are not a silver bullet," she said.

After the hearing, Gym said she learned a lot from the testimony, adding she intends to keep a close eye on the district to make sure the city's schools are meeting state educational requirements.

"We are going to be investigating that," she said.

There will be three additional State of Philly Schools public hearings: March 3 in West Philadelphia; March 8 in South Philadelphia; and March 15 at Edison High School in Juniata Park. All of the meetings begin at 5:30 p.m. Locations for the two earlier hearings have not been finalized.