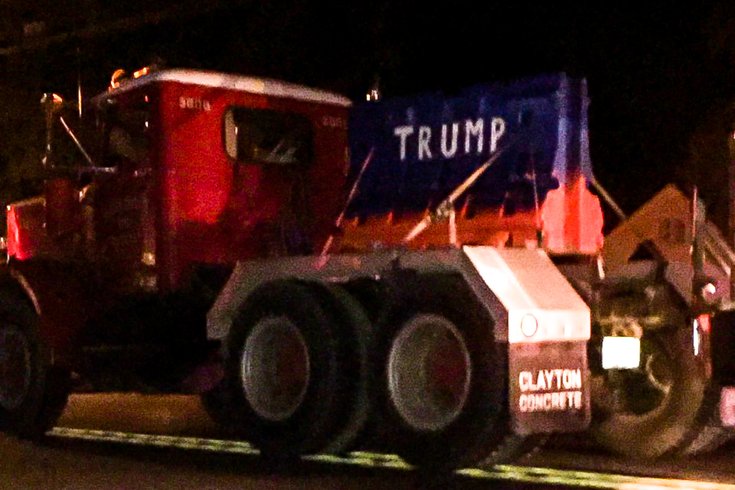 But a float in the night parade raised eyebrows and turned up the heat on the controversy.

Photos circulating on social media and provided to PhillyVoice show a flatbed trailer making its way down Bellevue Avenue carrying a concrete barrier – spray-painted "TRUMP" on both sides.

"This makes me ill. Even if the town stood by her as someone from Hammonton who has succeeded on a national stage, they had no business turning the holiday parade into a political event." – Facebook comment on the Hammonton parade

Many saw the float as a show of support for a border wall, something Trump promised repeatedly on the campaign trail that he would build on the U.S.-Mexican border.

One parade organizer, Mickey Pullia, a member of city council and a volunteer firefighter, said he’s unsure who owns the truck and trailer, which has appeared in past parades but was not registered.

“There was no place in the parade for a wall,” Pullia said, adding he didn't think the float represented a border wall.

But one Hammonton resident, who works in the public sector and asked to be identified only as Melissa, said the barrier was “a perfect representation” of the wall Trump has vowed to build to keep Mexican immigrants from illegally coming to America.

She said she did not entirely grasp the symbolism until the next day after looking over photos from the parade.

“It was a subtle, but clever way of showing the polarity of what’s going on," she said. "A subtle ‘Gotcha!’”

The barrier, chained in place on the flatbed, is the sort of portable wall used when doing construction work. The truck carrying the float had mud flaps emblazoned with “Clayton Concrete,” a company with numerous locations in the state. Asked about the truck’s appearance in the parade, a spokeswoman for the concrete company on Tuesday said, “We’re not going to answer that.”

The parade last Saturday night, usually about community and kids, became controversial when Conway, who was Trump’s campaign adviser and continues to play a role in the presidential transition, was invited to serve as grand marshal and accept the keys to the town.

Pullia, the councilman who invited Conway, had insisted last week, "I don't play politics with the Christmas parade," a phrase he used several times when speaking with media outlets. He denied that Conway's appearance was a political statement.

“This is not a political event in any way, shape or form," added Pullia, an officer in the town fire company which stages the parade.

Pullia knew Conway, a native of Atco, as a classmate at a local Catholic high school. Her appearance attracted a knot of reporters and photographers, who clustered around her as the Trump "wall" paraded by.

No mention of the float or images appeared in media accounts immediately following the parade, though a reporter could see part of the display as it moved by where Conway spoke to the media near a viewing stand.

But photos of the truck carrying the float have since been made available to PhillyVoice.

And the photos attracted a crowd on Facebook commenters in a closed group of women who self-identify as progressives. Many highlighted the work of migrant workers in helping to establish the town as the "blueberry capital of the world."

“It’s a Build That Wall float. In a Christmas parade.”

I will never spend a dime in that town...nonpolitical holiday parade indeed.

Just in case some are not aware, thousands of Mexican and other Latino migrant workers come every summer to do the back breaking work, hours in the beating hot jersey summer sun harvesting the blueberries that makes Hammonton the blueberry capital of the world!

“This is not a political event in any way, shape or form." – Mickey Pullia, Hammonton Fire Company officer and parade organizer

20-25 % of Hammonton’s residents are Latinos, Mexicans or other people from other Spanish speaking countries of origins. They are hard-working, church going, Contributing members of that community and to do this at this hometown parade where they live too and so many children came to feel the warmth and joy of a Christmas parade is so wrong and so sad on so so many levels. Shame on you Hammonton! Less than two generations ago, most of your Italian Catholic grandparents were immigrants working in those same fields.

This makes me ill. Even if the town stood by her as someone from Hammonton who has succeeded on a national stage, they had no business turning the holiday parade into a political event. Over the years, we've gone to great lengths to make these events more inclusive (and I'm sorry, that's not "political correctness"), but now this is the direction we're going in?

This is appalling. How many farms and businesses in Hammonton employ people from other countries. Its looks like a wall to me, but maybe it was a protest?

The cab of the 1960s-era truck had “Waretown Volunteer Fire Department” stenciled on the doors.

But the fire chief in that small Ocean County community, Brent Cunningham, said the truck, once used to haul a water tanker, had not been owned by the department in at least seven years.

“We weren’t aware,” Cunningham said of the truck’s appearance in the parade. “Our fire company has always strived to maintain neutrality [in politics.] This does not represent us.”

Hammonton’s mayor, Steve DiDonato, did not respond to a request for comment.

Hammonton is a town of fewer than 15,000 residents and overwhelmingly Italian-American from its days as an agricultural hub in the early 1900s, when many migrants found work there and then made homes.

But today about 20 percent of the town’s population is Mexican-American.

Latinos, first from Puerto Rico and then from Mexico, took their places in the farm fields of Hammonton decades ago and now own homes and small businesses in the town.