Watch: Allen Iverson tells TMZ exactly why he won't be an NBA coach 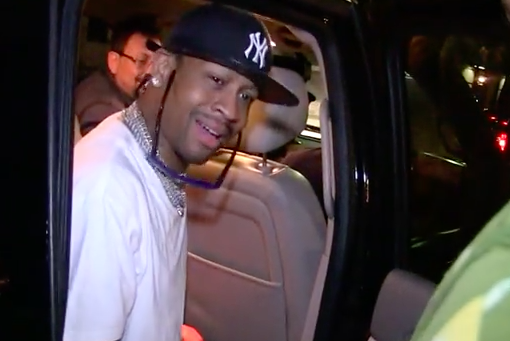 Allen Iverson removes all doubt about his interest in coaching in the NBA.

The punchline sets itself up like clockwork: Allen Iverson will never be a coach in the NBA because he's not a fan of practice or lifting weights. Right? Right.

Wrong, actually. Those may be factors, even though there's a good chance some players would love being on that team, but it turns out the Hall of Famer doesn't want to coach for another very specific reason. Gossip site TMZ caught up with A.I. as he exited a club at an unspecified location over the weekend.

The whole interaction is humorous, vintage Iverson. First, the bodyguard or friend who tries to nudge him away from the camera gets told twice to zip it, which makes this video worthwhile in its own right. But then come the questions about the Sacramento Kings' baffling trade of DeMarcus Cousins and Iverson's upcoming participation as a coach/player in the BIG3 three-on-three professional basketball league. It's his dream to reunite with the guys who got in the way of his only direct shot at an NBA title.

But his parting response to the question about coaching is the best. Maybe this is why he's called The Answer.

For what it's worth, Iverson's former coach Larry Brown has lobbied in the past for the Sixers to bring their former superstar into a front office role. Maybe he can be the guy who tells the truth about the team's injury reports.