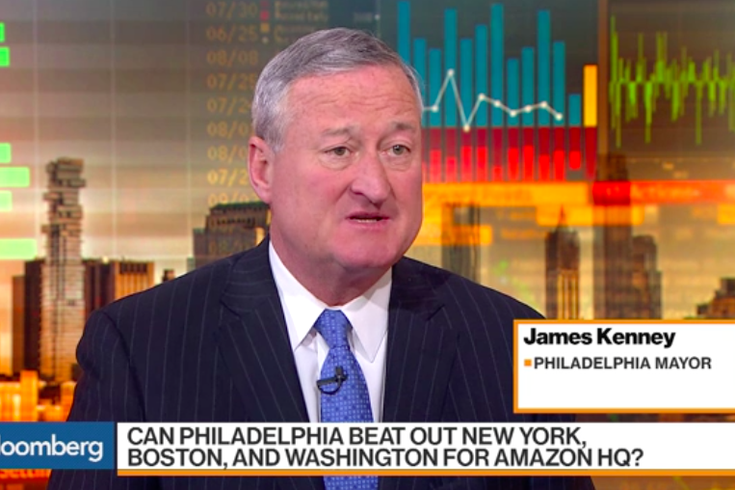 Mayor Jim Kenney appears on Bloomberg to push for Amazon headquarters in Philadelphia.

Philadelphia Mayor Jim Kenney is all in on landing Amazon's coveted second headquarters. In less than two weeks, the city whipped together a #PhillyDelivers campaign and got to work on putting together a proposal that will convince the global tech giant to bring thousands of new jobs to Philadelphia.

In the background, economists and analysts have been evaluating cities around the country to see how they stack up against Amazon's wish list. Some have deemed Philly a serious contender and others have slotted it behind cities including Denver, Chicago, Atlanta and New York City.

We knew how Mayor Kenney felt as soon as he dropped this primo pun on Twitter.

We think Philadelphia would be a PRIME location for Amazon that would make people SMILE! Look forward to submitting a proposal! https://t.co/l60Wn5BVdg

Appearing Tuesday on Bloomberg, Kenney elaborated on Philadelphia's suitability for Amazon's $5 billion plans. His "all hands on deck" comment makes clear the city is pouring significant resources into the proposal now being crafted by the Commerce Department and the Philadelphia Industrial Development Corporation.

"We're bringing in all of our university help, our medical center help," Kenney said.

A graphic in the Bloomberg segment presents the following key points in Philadelphia's favor:

•Dense concentration of colleges and universities

As the segment notes, Amazon's RFP explicitly states the company's preference for an advantageous tax environment. Kenney said he doesn't feel the state will necessarily need to change its tax code in order for Philadelphia to provide Amazon the incentives it seeks.

"We haven't gotten into the specifics of tax incentives yet and we don't believe there's any major state law changes that need to happen," Kenney said. "We've gotten criticism about corporate tax breaks and that and the like. This is too big of a deal, and too many jobs, and it's too great of a company for us not to go after it."