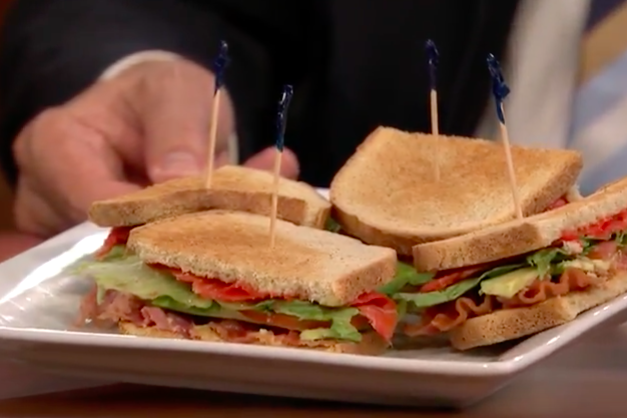 Kevin Bacon has spent a lifetime rolling with the punches when it comes to his last name. Climbing into the limelight only multiplied the obligatory references to America's favorite breakfast.

Appearing Friday night on "The Tonight Show Starring Jimmy Fallon," the Philadelphia native and "I Love Dick" star delivered not just on the bacon front, but graced audiences with his angelic voice and straight-faced sense of humor as well.

The multitalented actor and musician revealed that he's an inventive man in the kitchen, debuting three new twists on the classic bacon, lettuce and tomato sandwich.

"This is called way too much time on my hands," Bacon deadpanned.

After testing out the BLAST with a member of the audience, the conversation turned to Bacon's wife Kyra Sedgwick, first-time director of the Lifetime movie "Story of a Girl." The film, which examines the family fallout of a leaked sex tape, debuts Sunday night and stars Kevin Bacon alongside his daughter, Sosie.

"I always told her that she would be a great director and that she would enjoy the hell out of it," Bacon said. "And I was right, and I can actually say 'I told you so' and not get my ass kicked."

The best was saved for last when Sedgwick appeared on the set to perform a song alongside Fallon and her husband, who tours with his brother as part of the longstanding folk rock duo The Bacon Brothers.

The trio decided to play a delightful rendition of Peter, Paul and Mary's 1962 cover of "Blowin' in the Wind," part of Fallon's First Drafts of Rock segment. Everything is by the book and perfect until the second verse comes around. What's that about woodchucks chucking?