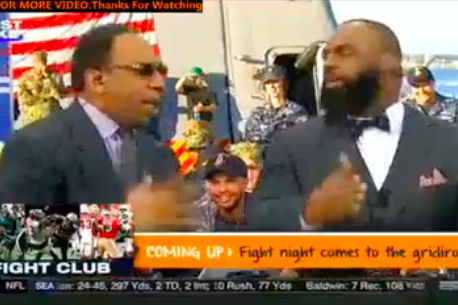 Donovan McNabb and Stephen A. Smith argue on ESPN's "First Take" on November 6, 2017.

The Eagles dropped 51 on Denver to improve to a league-best 8-1 heading into their bye week. The last time the Eagles sat atop this perch, it was Donovan McNabb's team.

Appearing Monday afternoon on ESPN's "First Take," McNabb struck a different tone from his assertion a few weeks ago that Rams quarterback Jared Goff is the NFC's best, not Carson Wentz. At this point, McNabb appears to be all-in on his former team.

"They're the number one team right now in football," McNabb said at the end of his segment, opening the door to Max Kellerman and Stephen A. Smith. Kellerman, of course, couldn't resist taking a direct shot at McNabb's history of almosts as a continuation of a local curse.

"You should know that better than anyone, Donovan!" Kellerman said. "You were in the NFC Championship Game every year for a hundred years."

But the best part of the clip below is McNabb getting into it with Smith over whether the Eagles are better than the 6-2 Steelers. It gets a little chippy.