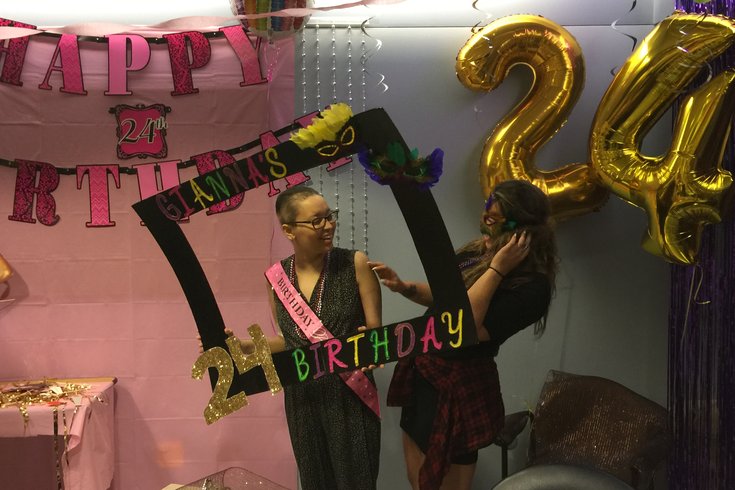 Gianna DeVeitro turned 24 on Wednesday, surrounded by friends and family at the Hospital of the University of Pennsylvania. The Deptford, New Jersey woman has leukemia.

Her birthday celebration featured friends, family, a wide array of food, a DJ and a special surprise delivered by a trio who wore wigs and snuck in through a side door just before 3:30 p.m.

You see, Gianna is a big Lady Gaga fan. Strike that: she’s a huge Lady Gaga fan, as evidenced by the pop-star cardboard cutout on prominent display in a conference room turned party hall for the day.

That trio of nurses – Brittany Muszynski, Nicollette Colleluori and Chelsey Billig – swapped their scrubs for Gaga-inspired costumes to perform the song “Telephone” as a surprise for Gianna and the crowd that loves her so.

The performance lasted less than two minutes, but it meant the world to Gianna. 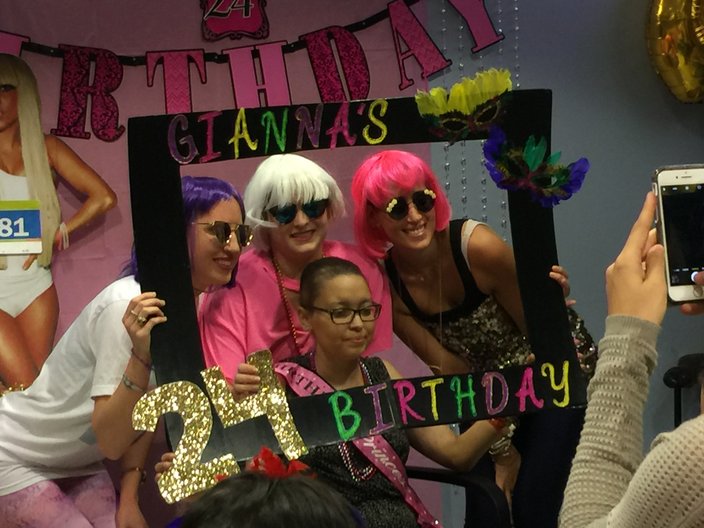 Gianna DeVeitro, front, poses for a photo with Hospital of the University of Pennsylvania nurses, from left, Brittany Muszynski, Nicolette Colleluori and Chelsey Billig, after the trio surprised her with a Lady Gaga performance for her 24th birthday.

The Deptford, New Jersey native has lived on the seventh floor at the Hospital of the University of Pennsylvania’s Rhoads Building after a bone-marrow transplant failed to help counter the leukemia she was diagnosed with last July.

She's undergone chemotherapy, and oncologists are desperately seeking more treatment options. Most have failed so far. Still, Gianna holds out hope that she’ll be able to attend Lady Gaga’s September concert at the Wells Fargo Center.

Her HUP support system has set out to get the pop star’s attention to further brighten her days, seeking an inspirational message via FaceTime, an in-person meeting should the singer return to the Philadelphia area or joining in an effort to bolster awareness of the need for bone-marrow donors.

Since Gaga wasn’t there Wednesday, the trio of nurses wanted to give Gianna the next best thing.

“Gianna is a special girl,” said Billig, a registered nurse, after losing her costume. “We would love to make all our patients’ dreams come true, but Gianna, especially, is someone who deserves this.

“Her courage, faith and strength have been so admirable. We have been blessed as nurses to be able to take care of this angel.”

Sitting on the bed in her hospital room with her mother Tina and brother Jaden at her side, Gianna spoke about the medical turmoil she’s faced since her diagnosis on July 18, 2016. She soon started chemotherapy at Cooper University Hospital in Camden.

When it became clear that a bone-marrow transplant was the ideal treatment path, some 400 matches were pinpointed. Those were whittled down to two, and Gianna’s ultimate match came from a 30-year-old from Germany.

After that November 2016 transplant failed – successful transplants essentially replace the recipient’s immune system with that of the donor, but Gianna’s failed to remedy graft-versus-host disease – she returned to HUP.

There, her room features a slew of Gaga paraphernalia. Her nurses there, as evidenced by Wednesday’s birthday party, have grown close with their patient, as well.

Muszynski shared that it was only natural that she’d request to become Gianna’s primary nurse during her months battling the disease at HUP.

The relationships have helped counter the feelings of isolation that bone marrow-transplant recipients have, living essentially in a bubble. To hear Tina tell it, if Jaden even got the sniffles, he’d have to stay far away from Gianna in her compromised state after the transplant.

“It was very boring being restricted to the house,” Gianna recalled of those first 100 days after a procedure that doesn’t involve surgery, likening it to an IV drip after getting massive doses of chemotherapy. “You don’t get to go out because (of how easy it would be) to get sick.”

Once the transplant was deemed a failure, she’s taken an “outpatient pill to slow down the leukemia” as doctors decide future prospects that include clinical trials.

Since she and other patients couldn’t get out of the hospital for the “Be the Match Walk and Run" on April 8, they held a similar event on the Rhoads floor earlier this month. They even put a walk bib on the cardboard Gaga cutout, which served as the inspiration for Wednesday’s performance. The nurses and Gianna have also had mani/pedi parties in her hospital room.

“I have a lot of support, and it’s all made me feel better,” said Gianna, who was bummed about being in the hospital for Easter and her birthday.

A @PennCancer patient wants a visit from @LadyGaga to help spread the word about bone marrow donation. Help this go viral! pic.twitter.com/lxct1kZnzW

Her nurses-turned-friends hold out hope that Gianna and Gaga can connect in some fashion, though. It’s not just about her; it’s about raising awareness for bone marrow donation that saves lives.

So, what do you say, Gaga? You can help a big fan help others across the globe.