Liam Lindsey receives his own police uniform, whistle and medallions 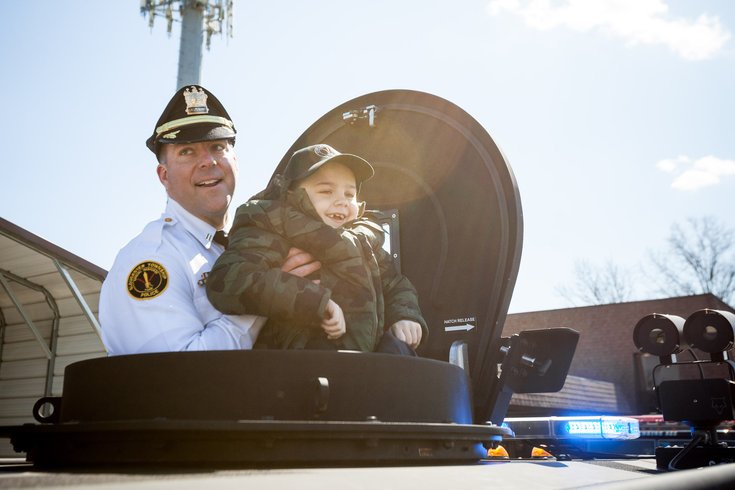 Liam Lindsey was all smiles as he buttoned up his Gloucester Township police uniform top, pulled on a police cap and was sworn in as the department's youngest police officer.

"They're the coolest job in the world," Liam beamed. "Because they catch the villains and stuff. And because I like the K9s."

Liam's smile only brightened as he toured the police station, barked commands at the department's police dog and took a ride in the Armored Response Vehicle. Holding a SWAT team shield, Lindsey ordered his family to "try to punch me for real."

"This is wonderful," said Lauren Lindsey, Liam's mother. "This is all I'm going to hear about for days." 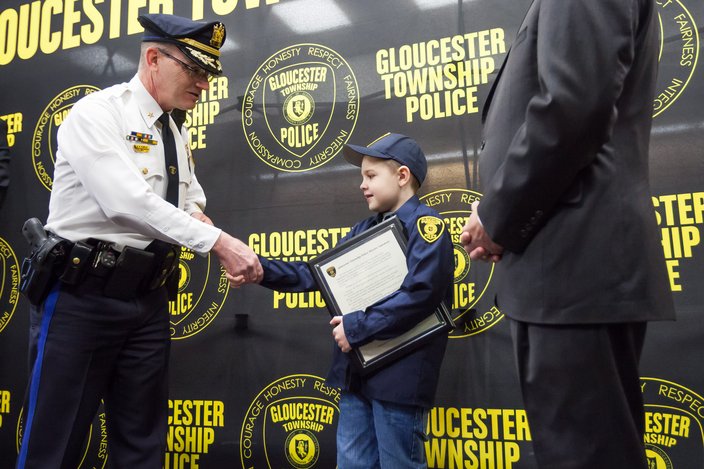 Liam was diagnosed with leukemia in September 2013, his mother said. He is being treated at Children's Hospital of Philadelphia, receiving chemotherapy treatments and being administered various IVs and spinal taps. But doctors hope his treatments will end by the end of the year.

The trip to the police department was initiated by Lois Maunz, Liam's nurse at Glendora Elementary School in Glendora, New Jersey. Maunz knew of Liam's desire to become a police officer and mentioned it to patrol officer David Belcher.

That desire became a reality Monday when a long line of police officers, firefighters and Gloucester Township officials gathered outside the police department to greet Lindsey, who arrived via a police escort from his home.

Wearing his new uniform, Liam stood at attention while a fellow officer sang "The Star-Spangled Banner" as a crowd of police, firefighters and township employees gathered for his swearing-in ceremony. Police Chief Harry Earle presented Liam with a trio of medallions, a whistle and plaque featuring the department's mission statement.

Liam was introduced to his fellow officers as a Kindergarten student who enjoys fruit punch, soft pretzels, gym class and playing with LEGOs.

Liam then toured the police station, listing his visit to the holding cell as a highlight. Though he found it "a cool place to go," Liam admitted he would not want to be held there.

Liam also got an opportunity to order Arrow, a police dog, to sit, come and, finally, "get him," a command that sent Arrow chasing and biting a police officer wearing an arm-guard.

Donning a SWAT helmet, Liam then hopped onto the department's Armored Response Vehicle, where he operated a small, remote-controlled car used by police to enter enclosed areas that potentially are dangerous.

"I tried to get everybody," Liam said, noting the way he sent the car toward the people that gathered around the ARV. 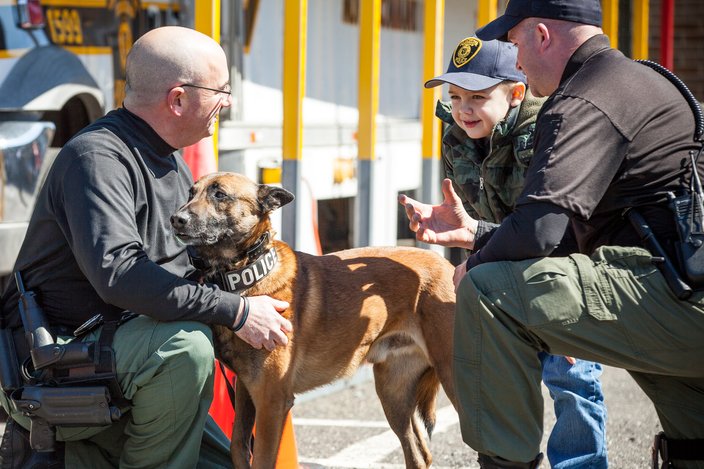 He finished the day by getting a tour of a Chews Landing firetruck. Donna Lindsey happily watched her grandson enjoy himself, saying she was overwhelmed that police would do so much for Liam.

"It's just amazing," she said. "People are amazing."

The day provided the Lindsey family a light-heartened moment in a journey that both Donna and Lauren described as difficult.

"From the minute that he was diagnosed with his illness, that was a shock, and it's just been one thing after another," Lindsey said. "He's had a long struggle, but it's almost over. We're grateful. He seems to be doing just great."

Lauren Lindsey has established a GoFundMe.com page to raise money to help her family cover Liam's medical bills. The campaign has raised $5,600 of its $10,000 goal.