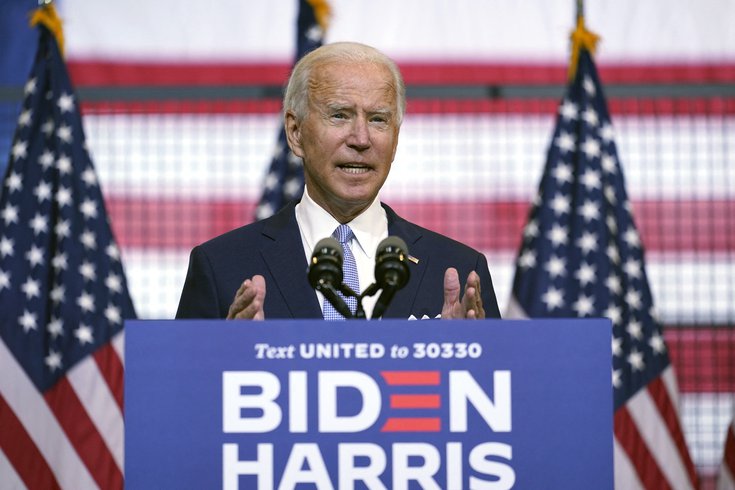 ABC News announced the event on Thursday after both Trump and Biden said they would no longer participate in the second presidential debate, which had been scheduled to take place in Miami.

The Commission on Presidential Debates announced earlier Thursday that the debate, originally set to be moderated in-person by CSPAN's Steve Scully, would move to a virtual format.

The decision was made in the wake of President Trump's COVID-19 diagnosis and in consultation with health advisers at the Cleveland Clinic. The campaigns of both candidates were notified only shortly before the switch was made.

Trump already had stated he would not participate in a virtual event.

"I'm not going to waste my time on a virtual debate" -- Trump, on with Maria Bartiromo, begins his first post-coronavirus interview by saying he's pulling out of the second debate. (He sounds a little hoarse.) pic.twitter.com/R43JSszfll

The ABC News Town Hall with Biden will be moderated live by George Stephanopoulous at a location not yet disclosed in Philadelphia. Additional details about the event will be revealed in the coming days.

The Commission on Presidential Debates has yet to officially cancel the originally planned virtual town hall. In the event that the virtual Trump-Biden debate is back on, below are the details on how to watch it.

Where is the presidential debate taking place?

Scully and the White House Pool of reporters will be located at the Adrienne Arsht Center for the Performing Arts of Miami-Dade County. Biden and Trump would be permitted to choose locations where they would participate virtually.

Historically, a virtual debate is not without precedent. The third debate in 1960 between John F. Kennedy and Richard Nixon took place with both candidates in separate locations.

Trump is not required by law to participate in the debate. In fact, former President Jimmy Carter refused to take part in the first debate in 1980 against Ronald Reagan.

The Biden campaign responded to Trump's remarks about the debate as a "win-win" situation.

It is not yet clear how voters would submit questions for the candidates in the Oct. 15 debate.

Broadcast networks ABC, NBC, CBS and FOX will air the Trump-Biden debate, as will major cable news networks FOX News, MSNBC and CNN. Those options to watch are available with cable or live-TV streaming service subscriptions.

Networks with streaming capabilities or affiliated apps will also stream the debate, making it accessible to those with Apple TV, Amazon Fire TV, Roku, and similar streaming devices. Other networks and news organizations likely will announce plans to stream the event as details are solidified.

C-SPAN will stream the debate live online at C-SPAN.org and the audio-only feed on the C-SPAN radio app.

The town hall format will put the questions in the hands of American voters, who likely will want to know more about President Trump's experience with COVID-19, and how the treatments he received can be made accessible to the public.

There also will be increased focus on negotiations for a second coronavirus stimulus package, which has been tied up for months. The president suggested that he would table the issue until after the election, but pressure is mounting for a deal that can provide much-needed relief to American citizens hard-hit by the pandemic.

The final presidential debate is scheduled to take place Oct. 22 at Belmont University in Nashville, Tennessee. It will be hosted by Philly-native Kristen Welker, co-anchor of Weekend TODAY and the White House correspondent for NBC News.