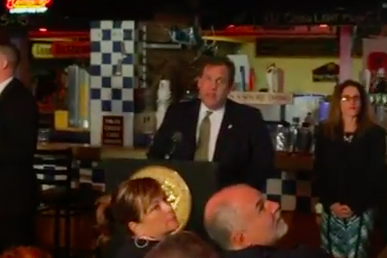 One day after protesters dogged New Jersey Gov. Chris Christie at a fourth-anniversary event for Superstorm Sandy, the embattled Republican statesman and his wife Mary Pat released a statement to mark the historic devastation and praise residents for their resilience.

Statement from Mary Pat and I marking the 4th anniversary of Superstorm Sandy: pic.twitter.com/NE53TPVz9U

in Seaside Heights on Friday, heated demonstrators challenged a set of administration statistics touting the state's role in what has been a long and grueling recovery process.

As Christie attempted to run through the numbers, a group of demonstrators carrying signs disputed the governor's claim that his administration has helped 365,000 homeowners in their efforts to repair their property damage and return home.

Footage from the event shows a tense scene in which one man used choice words to refute Christie's presentation.

In the years since the hurricane, Christie has said he's proud of New Jersey's recovery efforts, particularly the restoration of beaches and the construction of dunes to mitigate future flooding. A multifaceted homeowners' repair and reconstruction effort, led by $1.6 billion in federal grants administered by the Christie administration, has often been criticized for failing to adequately fund home repairs and prevent foreclosures among the hardest-hit residents.

More than $850 million has been disbursed to approximately 13,300 homeowners who participated in the state's Reconstruction, Rehabilitation, Elevation and Mitigation (RREM) Program, according to the administration. About 5,700 families have returned to their pre-Sandy homes.

In 2015, the Internal Displacement Monitoring Center (iDMC) estimated that some 39,200 people across the region were displaced by Superstorm Sandy.

Some of the federal programs administered by the state have also been subject to fraud, resulting in charges against more than 70 people who allegedly exploited the relief system.

Christie's approval ratings have sunken to an all-time low as his alleged involvement in the high-profile Bridgegate scandal gets compounded by his role on the degenerating campaign of Republican presidential candidate and his unwillingness to address the revelations of the past month.