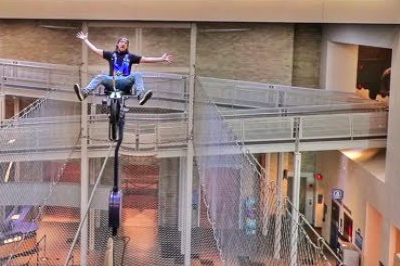 Whenever you hear about the life and times of a social media influencer, it's natural to wonder how the hell anyone ends up with that gig. Usually, you find out it's a combination of creative experiments, silly skits and a bubbly personality—all pretty great things to pursue even if you never wind up sponsored to travel the world.

For Shaun McBride, best known as Shonduras, it was a love of doodling, extreme sports and the discovery of Snapchat that put him on the map as the platform's first viral celebrity. He's never looked back and now the Forbes "30 Under 30" pick can legitimately described himself on LinkedIn as a Professional Fun Haver.

Shonduras' soaring popularity — he's got more than a million subscribers on YouTube — recently caught the attention of Comcast, which sought the influencer's help to spread the word about Xfinity Mobile. The newly launched service touts a data plan with Xfinity's wifi hotspots built into the LTE network, making life easier for streaming junkies and heavy app users.

Shonduras was given the job of traveling all over the place to test and demonstrate the advantages of the Xfinity Mobile network. In Philadelphia, his mission involved checking out the must-see sites and chatting up locals to collect enough snap doodles for an eventual mural, according to BillyPenn.

A Youtube video of Shunduras' visit covers plenty of fun-having at places like the Franklin Institute, John's Water Ice, the Mummer Museum and FDR skatepark. Spread out over 48 hours, McBride didn't hesitate to call his time in Philly the "double best day ever," and in the future we'll get a chance to see "THE BIGGEST DOODLE EVER."