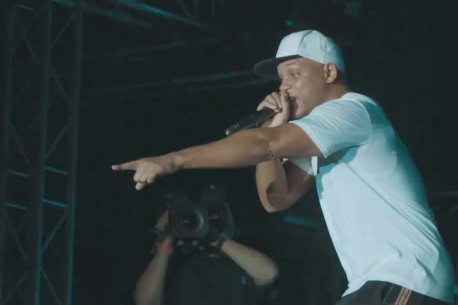 Will Smith performs "Get Lit" during two-show European tour with DJ Jazzy Jeff.

In music news straight out of left field, Will Smith and DJ Jazzy Jeff have resurrected their boom box-era chemistry with a brand-new single the duo performed during a two-show stint last month in Croatia and the U.K.

Those shows sent fans of the duo into a frenzy with hopes that they might extend their reunion or parlay it into a string of shows in the United States. Hardly anyone expected it would lead to the release of Smith's first new song since 2005's "Lost and Found."

In a Facebook post, the 48-year-old actor introduced "Get Lit," an EDM track with an intensity and structure we haven't really heard in Smith's more lush discography without DJ Jazzy Jeff. This feels a lot more like their collaboration of the old days, but without the same hip-hop lite vibe.

"Been messing around in the studio and wanted to try this new track on the fans in Croatia and U.K.," Smith wrote on Facebook. "No plans, no pressure… just back to basics with DJ Jazzy Jeff!"

The inspiration for the reunion reportedly came from another legend of Smith's era. While backstage at the European shows, ET learned from Smith that LL Cool J contacted him to push for a return to music.

On the acting side, Smith is due to star in the Netflix original "Bright" and was recently cast as Genie for Disney's live-action remake of "Aladdin." He's hinted at a potential future in politics, but who knows? Maybe he'll decide to revive things with DJ Jazzy Jeff for another album at some point down the line.