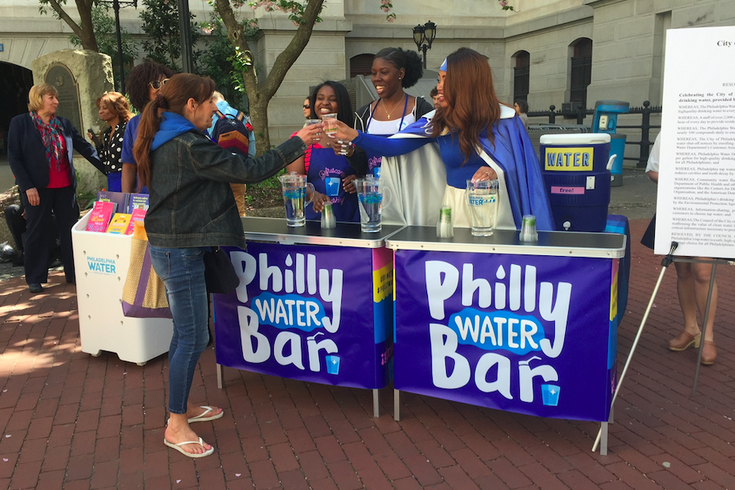 Maura 'Water Woman' Jarvis toasts Sharon Sohl after the South Philadelphia woman was among the first to get a free drink of water at the 'Water Bar' in the City Hall courtyard on Wednesday, April 24, 2019.

Last month, we brought you word of the Philadelphia Water Department’s “Drink Philly Tap Water Ambassador” program in which residents could earn up to $600 for helping to spread the message that the city version “is safe, affordable, and sustainable.”

The grant-funded mission to break the chains that bind us to bottled water was created to help “bust myths” that tap water is – for lack of a better word – yucky,  and safe to imbibe.

On Wednesday, a tendril of that effort poured itself out onto the City Hall Courtyard. There, at lunchtime, the celebrated PWD opened up the “Philly Water Bar,” the first in a series of events that will return each Thursday from noon to 1 p.m.

And, wouldn’t you know it, the promotional event drew dozens upon dozens upon dozens of people to the water bar tended by Maura “Water Woman” Jarvis and a pair of students from W.B. Saul High School of Agricultural Sciences. Suffice it to say, it was better received than word of the Starbucks kiosk on Dilworth Park.

Sure, it didn’t hurt that it was a sunny, cloud-free 67-degree lunch break, aided by the allure of – in Water Woman’s words – “Ice Cold! Delicious! Nutritious! Water!”

Those hitting the plastic cup at the Water Bar included Sharon Sohl of South Philadelphia, who described the free drink as “ice cold, tastes sweet with no after-taste.”

Going back for seconds was Gary Paprocki, who was sure to point out his bias after being interviewed. The outreach coordinator at Fairmount Water Works described his second round as “clean, delicious and chilled.”

“Kids have come through saying, ‘Oh, it’s yucky. Just buy bottled water,’ but it’s good, and I like selling it,” he said, not meaning he was vending it, but preaching its benefits. 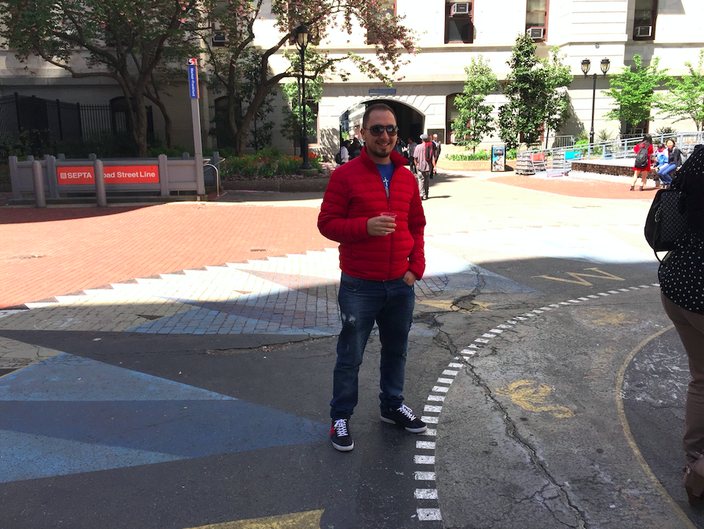 Visiting Philadelphia from Argentina, Roman Tlamandana happened upon the Water Bar and described the drink as 'pure water, clean water.'

Roman Tlamandana happened upon the Water Bar during a visit to Philadelphia from Argentina.

Howard Scott Pearlman concurred before breaking out a golden microphone, but not using it to decry the target of the garments he wore, which you can see in the video embedded below. (He is not affiliated with the Water Department, it bears mention.)

“It’s delicious. I’m surprised,” said Pearlman. “It usually has a bite to it. That’s why Breyer’s Ice Cream used to have that bite, but then they moved out of town and it didn’t taste the same.” 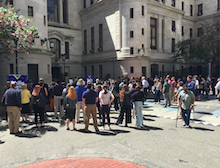 The Philadelphia Water Department's 'Water Bar' drew quite a crowd on opening day.

A dissenting vote came from Patricia Cooper of South Philly who, despite drinking the free water on Wednesday, said she still prefers bottled water. It didn’t help that Water Department crews working on her block recently sent brown-hued water through her spigot the other day.

“I normally don’t drink tap water. It tastes different,” she said. “But I can drink this since it’s chilled.”

She was backed up by officials including Diana Esher – EPA Region 3 Office, represent! – along with Drink Philly Tap Water Ambassador Leon Sanford.

“Water Woman” Jarvis, assisted by the high-school students, led the crowd in a recitation of the Water Bar Pledge and Stevenson offered up a toast in the hoped that this was the dawning of a new day for tap water in Philadelphia.

You can see highlights of the festivities in the video below: