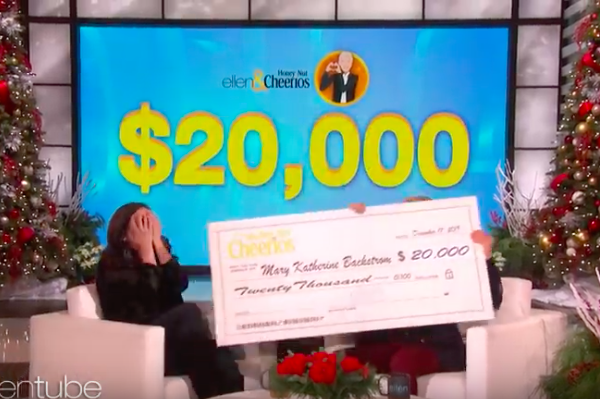 Ellen DeGeneres invited Mary Katherine Backstom onto her show after her vlog about accidentally hugging a stranger at Wawa went viral. The Florida woman received a $20,000 check for showing her holiday spirit, even if it was a bit misplaced.

An overzealous Florida woman's display of holiday spirit at her local Wawa has earned her a $20,000 check from Ellen DeGeneres.

Mary Katherine Backstrom, of Fort Myers, became an internet sensation last week when she shared a vlog from the Wawa parking lot. Through hysterical laughter, she recounted how she was feeling so warm for Christmas that she decided to pay for another customer's ginger ale.

When Backstrom walked outside to leave, she saw a man cleaning what she believed was her windshield. Overwhelmed with gratitude for the universe, she proceeded to walk up to the man and explain to him that she was thrilled to see the holiday spirit going around. She finished by giving the man a big hug.

It was at this time that she realized the man was cleaning his own windshield.

The vlog Backstrom shared was viewed by more than 80 million people as of early this week, prompting DeGeneres to bring her onto her talk show.

As it turns out, Backstrom has a history of charity and donated her kidney to an uncle who was in need. To reward Backstrom for her generous ways, Ellen and Honey Nut Cheerios' "Do Good Feel Good" campaign cut her a check for $20,000.

It's probably not recommended to go around hugging strangers at Wawa, but Backstrom got lucky for the one in a million times it would turn out to be a good decision.