We don't pay enough attention to detail when defining the Union's success, or lack thereof 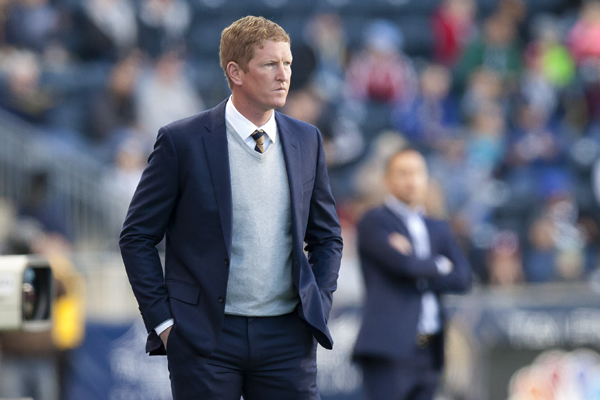 Union manager Jim Curtin has a record of 42 wins, 43 losses, and 26 draws since taking the reigns midway through 2014.

It started with a question about the Philadelphia Union clawing back to the .500 mark, ripping off four straight wins to move up to 7th place in the Eastern Conference with a 4-4-4 record.

Head coach Jim Curtin talked about the incredible difficulty of fighting out of an eight-game winless slump, but the more interesting answer was in a follow-up question about whether or not it's fair to even use the term ".500" in the sport of soccer, which involves draws, penalty shootouts, and cup games against lower-division opponents.

"You look at when they throw up win percentages all over the soccer world," Curtin explained on Wednesday. "It's a strange one because it subtracts the draws from it. In the NFL, it'll be that a good coach wins 70 percent of his games. In college it's 80 or 90 percent for a lot of these guys. And you go, 'wow, they just don't lose.' But soccer is different. Even Alex Ferguson, his (win percentage) is high, but one in the sixties is a high one, or an unbelievable one in soccer because of the tie factor. The context of a soccer manager's record is unique with the element of the tie. It does add a variable to that whole thing."

The Union have four wins in 2017. By definition, all wins are good wins, right?

They also have four losses. By the same logic, there are no good losses, correct?

Good, glad we got that out of the way.

Context comes into play when we get to the four Union draws.

Which of those would you define as "good" draws and which are "bad" draws?

You could certainly say that keeping two clean sheets on the west coast is a positive, so let's put Vancouver and LA in the "good" category.

The Montreal draw saw the Union blow a three-goal home lead, so that goes in the "bad" column.And against Toronto, Philly missed a penalty kick before finding a second-half equalizer against the defending conference champions. Is that a good draw or bad draw? I'll say "bad," since you should expect to win all of your home games, no matter the opponent.

It's really about semantics and context when we talk about ties. Even during the 16-game winless streak that started last August, not every result was entirely poor. The Union scraped a 1-1 result in Toronto and you also had the 0-0 in Vancouver. Despite not winning a game, they did have some decent performances over that stretch of games.

Now, eight months later, they're on a four-game winning streak, which can also be defined as a six-game unbeaten run if we include the two prior draws. No one is going to tell you that the 3-3 against Montreal is a good result, but that's technically part of the unbeaten streak, whether you like it or not.

It's only fair for us to point that out, since so much was said and written about the winless slump.

Another odd thing is the way we look at those winning percentages, which Curtin mentioned in the quote.

But if you take draws out of the equation, he's won 49%, which puts him right around the even mark.

For true context, we really need to go through all 26 of those draws to determine whether or not they were "good" or "bad," then weigh the results against the win and loss column.

So, if you added a fourth column to Curtin's overall record, it would look like this:

There are, of course, plenty of other things to consider. Does advancing on penalty kicks count as a win or draw? In this case, I marked down five USOC penalty shootouts as three wins and two draws.

Should we even count early round Open Cup wins against non-MLS opponents like Harrisburg and Rochester?

Do we look up every single time that opposing teams had an injured or suspended starter? What if they rested a few players after qualifying for the postseason?

Curtin's record will skew a little bit in each direction, depending on what parameters you want to emphasize and where you want to place the asterisks.