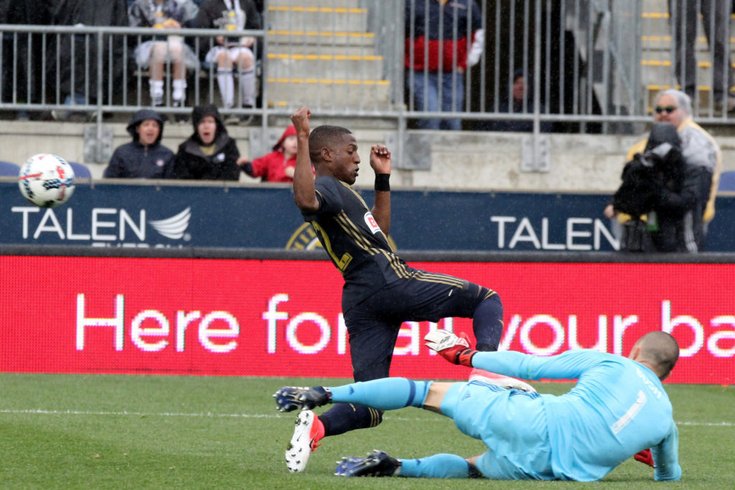 After playing just 35 minutes in March, Fafa Picault has now started five straight games. The Union are 4-0-1 in that span.

The Philadelphia Union have won every game since Sporting Director Earnie Stewart said this:

"Do I feel, within our system, that you can make tweaks? Yeah, for sure. But tweaks are, a lot of times, names."

That quote was given on May 4th, two days before the 3-0 victory against New York that sparked a four-game winning streak and pulled the Union out of the Eastern Conference basement.

It was in response to a question PhillyVoice asked about shape and formation. Is the 4-2-3-1 working the way it was intended? Or do you break a four-month winless streak by trying something new?

Stewart shares a philosophy with head coach Jim Curtin: there will be no change for the sake of change. They've repeatedly emphasized a "back to basics" approach, believing in their system and avoiding radical alterations. That's been consistent through the winless streak, which is now a winning streak.

What they have done, however, is exactly what Stewart talked about on May 4th, which is change the names. Curtin has benched some players, started others, and altered roles within the same system.

He's also made some smart tactical tweaks while keeping the shape, which were discussed in an excellent piece by Adam Cann over on Philly Soccer Page. They've dropped the center backs a bit deeper. The weakside fullback is staying home. Haris Medunjanin has found his stride as the team understands how to accommodate a deep-lying ball mover.

You also can't ignore form and chemistry. Some guys are simply having better individual performances while also beginning to jell with teammates.

But the biggest difference is the trust that Curtin has shown in a stronger roster, making the tough decision to sit starters and put "fringe" players on the field. That's something we haven't seen in the past when Union squads were razor thin.

Andrew Wenger played 20 games in a row before scoring his first goal in 2015. Maurice Edu was moved to center back in consecutive seasons to plug roster holes. Ken Tribbett got a few starts over Josh Yaro last year when both were healthy.

Curtin is showing newfound flexibility with personnel this season, and that's the main reason why the team is winning.

Bedoya back, Jones out

Alejandro Bedoya started the season in Tranquillo Barnetta's vacated number ten role, a spot that he and Curtin both agreed was not his preferred or favorite position.

His usage there resulted in little chance creation from a guy who started his career as a winger and developed into a physical, box-to-box central midfielder.

The Union started with two draws and three losses while Bedoya played as a number ten. He was pulled back to the eight in the 2-0 defeat to New York City.

That happens to be the last Union loss. Philly has four wins and two draws since that game, all with Bedoya playing deeper and forming a solid partnership with Medunjanin. He tends to stay on the right side of the field while Medunjanin opens up facing the opposite direction on his natural left foot. It's created an effective double-pivot in the defensive midfield.

find it interesting that 99% of Bedoya's passing and defensive actions took place on the right side of the field pic.twitter.com/p4PHdwFLNJ

To be fair to Derrick Jones, it's not necessarily his removal that has improved the midfield, it's much more about getting your highest-paid player into his best position. Jones is a 20-year old homegrown player who will eventually be an everyday starter.

It just doesn't have to happen right away.

Fafa Picault was one of the more interesting offseason signings, a guy with pace and foreign experience brought in on a reasonable salary.

His start was incredibly slow, with a preseason toe injury keeping him sidelined and leading to only 35 bench minutes in March. Picault didn't even make the 18 in the next two games.

A bout of illness suffered by Ilsinho allowed Picault into the starting XI in Los Angeles, and he hasn't come out of the lineup since, scoring two goals on 11 shots in 374 minutes.

Most importantly, he's doing the defensive work required of Union wingers, which is a heavy workload. Re-watch the Houston game and you'll see Fabinho and Curtin demonstratively pointing out two-way assignments to Picault as he tracks back to keep the shape.

You also don't see a lot of 5'8" players do things like this:

Alberg and Ilsinho at the ten

When the slump was at its worst, a lot of people were fairly questioning whether or not Stewart's 2016 signings were ever going to pan out.

The movement of Bedoya allowed Roland Alberg into the number ten spot, and while he became injured a few games later, he did score a brace in the Montreal game that again showed the potential that we saw glimpses of in 2016.

Ilsinho, on the other hand, was given a shot in the CAM role after Picault and Chris Pontius had locked down spots on the wing.

He has one goal on six shots in three starts at his new position.

The change has effectively allowed him to use his creativity and dribbling skill without having to do the same defensive work required on the wing. Ilsinho still has a lot more to show as a No. 10 but he's been much better since moving inside.

Pontius on the other side

One of Curtin's more underrated moves was sliding Pontius from the left wing to right, a spot where he's looked much sharper.

It's sparked production from the wide areas, where the combination of Pontius, Ilsinho, Picault, and Herbers had contributed zero goals and three assists through the first eight games. The Union just weren't getting any kind of stat-sheet production outside of two Pontius knock-down headers.

He still hasn't scored a goal this year but he has four assists in the last five games, already matching last season's mark and pulling into a three-way tie in the league-wide stats.

This is what a more recent Pontius chart looks like, with assists and key passes coming from the right side, complemented by his typical defensive work in the Union half of the field: 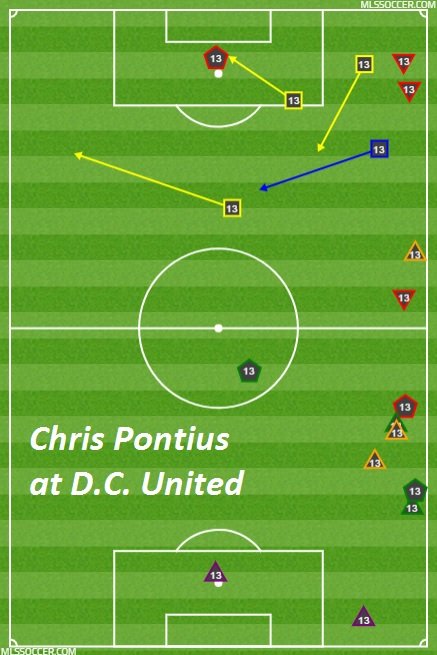 Jack Elliott, the last draft pick to sign a contract, was the first to see the field.

He's been excellent on a restructured backline, using his size and smarts to win balls in the air and on the ground while also distributing at a high level.

As far as Onyewu, he started the first five games of the season, then went to the bench to make way for Elliott. When Richie Marquez came down with the same sickness that affected Ilsinho, Onyewu was called on to pair Elliott at center back.

The Union are 4-0-0 with a +10 goal differential since Onyewu re-entered the starting XI. He plays with veteran savvy and positioning and is also part of the reason why Philly has adjusted the defensive shape.

As for Gaddis, people probably forget that he won the starting right back job from Sheanon Williams in 2015. The fifth-year fullback sat behind Keegan Rosenberry for the entirety of 2016, watching from the bench instead.

But Gaddis was always a pesky, highly-effective 1v1 defender, and his strength in that department has resulted in the Union being more cohesive in a more conservative design. He barely gives up anything on the flanks, which means that Elliott (and also Onyewu) aren't pulled into uncomfortable positions against faster and smaller players.

Oguchi Onyewu knows how to celebrate! The birthday boy puts his squad up 2-0 on the road. #DCvPHI https://t.co/fcwZ56OQ4z

Rosenberry and Marquez out

For context, two players can only have 78 combined starts and 6,120 logged minutes. That means the Union's defensive pair started 98.7 percent of their games and played 98.5 percent of available minutes.

This season, Rosenberry was benched for Gaddis and Marquez is now stuck behind in-form Elliott and Onyewu.

It does make me wonder whether the current lineup scales positively for the future. At 35 years old, Onyewu surely is not the future at center back. Is Gaddis a long-term starter at fullback? He's only four years older than Rosenberry, who is coming off a USMNT call-up and All-Star Game appearance.

Marquez was an excellent partner for Josh Yaro last season and should probably be having a breakout year in 2017. He played in the 0-0 draw with Los Angeles, the game that started the shutout streak.

Curtin is doing absolutely the right thing by sticking with his in-form center halves. When you win games and keep clean sheets, you don't touch the lineup.

But there will be interesting decisions to make when Yaro, Rosenberry, and Marquez rediscover fitness and form.

Curtin has always been a big fan of Fabian Herbers, the second-year forward/winger who lead the Union with seven assists in 2016.

There were times when I thought Herbers might have started this year, but Curtin instead gave Picault his shot, and put Ilsinho at the ten when he had given Herbers time at that position over Alberg last season.

Herbers, despite starting 10 straight games to finish the 2016 season, has had more of a bench role this season. He's done some good work in that regard, completing a wonderful cross in the Red Bull win and scoring a top-ten all-time Union goal in the D.C. shutout.

It was a shame to see him leave the Colorado game with an injury, which further complicates his situation. Herbers is projected to play about 100 fewer minutes in 2017, despite coming on strong at the end of last season.

It only took Curtin two games to put C.J. Sapong back in the starting XI, which was the result of the injury Jay Simpson suffered in the Toronto game.

Sapong has taken the opportunity and run with it, already cresting last year's goal total and doing his typically underrated work in the hold-up game.

Wijnaldum gets a game

Remember how Yaro started with Bethlehem Steel last season before making his MLS debut in Seattle?

Giliano Wijnaldum has followed a similar path this year, working his way into form and adjusting to the American game. He did not look out of place on Saturday night, playing a safe game within the Union's tweaked system.

In years past, Curtin probably would have stuck with Fabinho for a twelfth-straight start, but he made a defensive change while the team was currently riding a lengthy winning and shutout streak.

That's the kind of trust we haven't seen in the past.