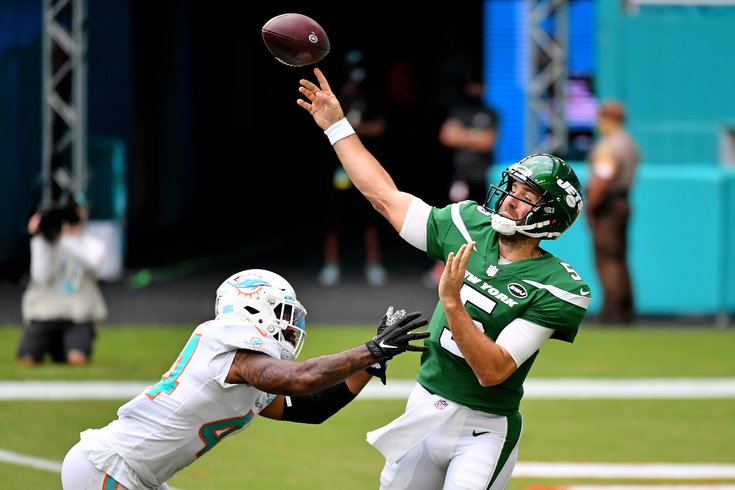 Eagles fans should be Joe Flacco fans on Sunday.

And so, each week we'll lay out a rooting guide for non-Eagles games on the NFL schedule, and yes, I'm aware that most of the below is obvious. You can also check out the latest Week 11 odds and read all my picks, here. 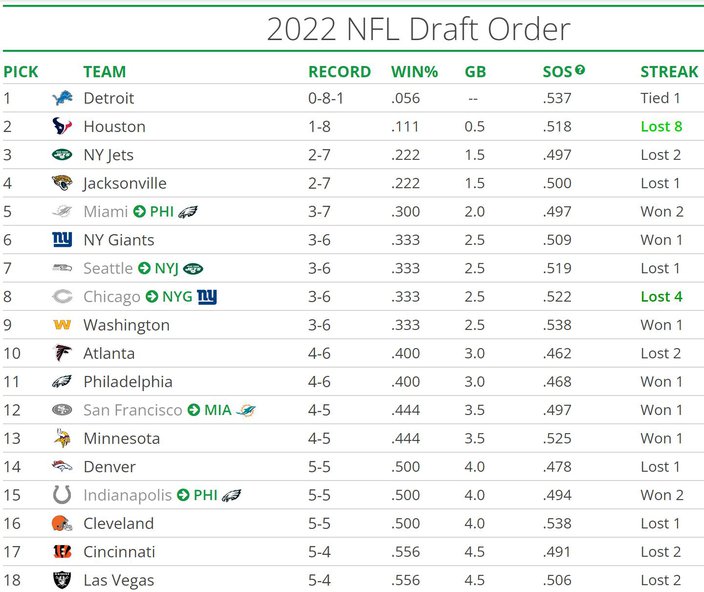 We'll organize the rooting guide a little differently this week, and probably for the rest of the season, categorizing games by draft positioning, and playoff implications. Ideal winners bolded below.

• Dolphins at Jets: Every Dolphins loss is an Eagles win since the Eagles own Miami's first-round pick, as you know. The Eagles will be hanging their hopes on Joe Flacco, who is starting for the Jets.

• Colts at Bills: If you need to catch up on the draft pick implications involving the Eagles and Colts, you can do so here.

The Colts are now 5-5, but they remain three games behind the Titans, who just keep winning games. The AFC South race is pretty much settled at this point, so let's go ahead and update the AFC wildcard race:

As you can see, the Colts are only a half game out of the 7 seed spot. If there was ever any possibility of the Colts benching Carson Wentz to preserve their first-round pick, that's out the window, at least at long as Wentz stays healthy. Wentz will pass his projected snap count benchmark sometime during the Colts' Week 13 game against the Houston Texans, again, as long as he stays healthy.

In other words, you can go ahead and just full on root against the Colts.

The Colts have a two-game winning streak after beating trash teams in the Jets and Jaguars. Now their schedule gets a little more difficult, as they'll face the Bills and Buccaneers in consecutive weeks.

It's ideal if they lose games, and teams close to them in the wildcard race win. As such, it's ideal if the Browns beat the Lions this week, and the Chiefs (barely hanging onto the AFC West lead) beat the Cowboys (also, F*** Dallas).

There are a also a couple of games in which AFC wildcard contenders play each other. They are:

I don't have a strong opinion on who are the ideal winners of those games.

• Texans at Titans: Even though the AFC South is basically settled, an extra Titans insurance win wouldn't hurt. There's maybe an argument that a Texans win would be ideal in that Miami could jump them in the draft order. Forget about that. It's hard to see how the Texans are going to win enough games for that to happen.

First, let's acknowledge that there's a legitimate debate to be had whether the Eagles are better served not making the playoffs. Here we'll base our ideal winners on a playoff berth being a good thing.

A look at the Eagles' place in the NFC wildcard race:

The Eagles will be rooting for pretty much any team ahead of them — as well as the cluster of 3-6 teams behind them — to lose.

The following games are easy to figure out, rooting interest-wise:

• Football Team at Panthers: There's maybe an argument that the Football Team is better than the Panthers, and more of a threat to the Eagles' wildcard chances? Anyone buying that premise? Anyway, for now, it's best if the team in front of the Eagles loses, and that's the Panthers.