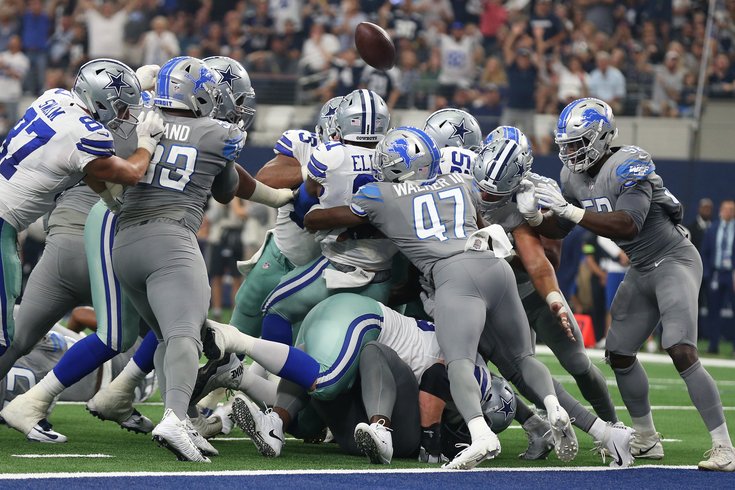 Have I ever mentioned that it's annoying that these two teams get the advantage of a home Thursday game every year?

Each week this season we have laid out a rooting guide for non-Eagles games on the NFL schedule, based on the premise that the Birds are Super Bowl contenders. They have not looked much like contenders to win it all through the first half of the season, but we'll see if that changes down the stretch. For now, we'll shift the focus to the division, as well as a potential wildcard berth.

Here are the best scenarios for the Eagles in the other games around the league, with the ideal winner bolded:

• Cowboys at Lions: Obviously, any time the Cowboys lose, that benefits the Eagles. However, this game has added importance because it could affect a tie-breaker scenario down the road. Here's how divisional tie-breakers work in the NFL:

If the Eagles beat the Cowboys Week 16, that's a split. The next tie-breaker is divisional record, and there's a good chance that both the Eagles and Cowboys will sweep the garbage-ass Giants and Washington team. That means it would go to the third tie-breaker, common opponents.

Here are the Eagles' and Cowboys' common opponents, with their results so far:

• Broncos at Vikings: The Vikings are probably too far out in front of the Eagles to catch at this point should the Birds need to do that for a wildcard spot, but it's still better if the Vikings lose to an AFC team.

• Saints at Buccaneers: The more games the Saints lose, the better it is for the Eagles, who can't seem to win in New Orleans. Selfishly, I wouldn't mind another trip to Louisiana.

• Jets at Washington: This is a HUGE game for 2020 NFL Draft positioning. Here's the current top 10 draft order, via Tankathon.

It's a much better outcome if Washington messes up their draft position.

• Falcons at Panthers: Carolina isn't going anywhere, but the sooner they're cleared out of the way, the better.

• Cardinals at 49ers: Because I have not been impressed by Jimmy Garoppolo, the most ideal No. 1 seed, for the Eagles' purposes, in my opinion, is the Niners, who I believe are the most beatable of the teams in contention for a first round bye.

• Bengals at Raiders: It's best for the Eagles if the Bengals continue to hold the No. 1 overall pick.

• Bears at Rams: A loss to the Bears could be something of a knockout punch to the Rams' season.