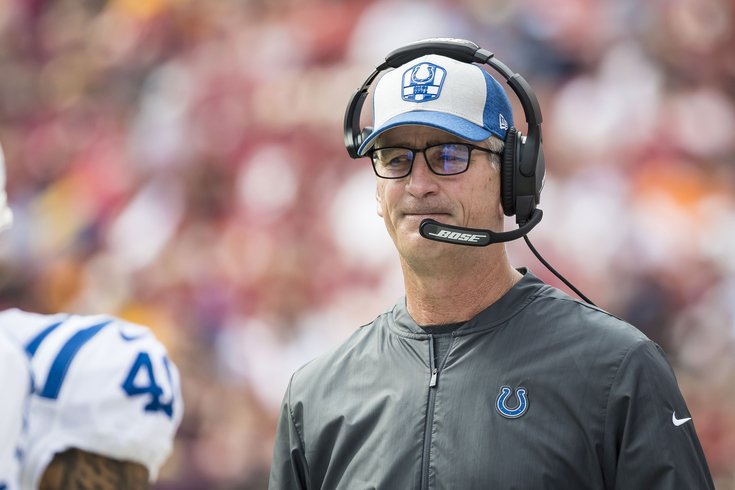 Frank Reich can still help the Eagles this season, if the Colts beat out the Ravens for a wildcard berth.

In past seasons, Philadelphia Eagles fans generally rooted for their own team, and kept an eye on the rest of the NFC East. In 2018, with the Birds initially being among the favorites to represent the NFC in the Super Bowl, it was perhaps worth keeping tabs on the conference, as opposed to just the division. And so, each week we laid out a rooting guide for non-Eagles games on the NFL schedule.

Eagles fans' outside rooting interests have long since shifted from earning a first round bye, to just having a seat at the table, at all, in the playoffs. Sitting at 5-6 behind the 7-5 Dallas Cowboys, the Eagles' only realistic chance to get into the playoffs at this point is to win the division, though there are long shot scenarios in which they could earn a wildcard.

At this point, it also makes sense to begin rooting for bad teams to win, so the Eagles' draft position improves should they fail to make the playoffs, which at this point is expected.

• Ravens at Falcons: The Eagles own the Ravens' second-round pick. If the season ended today, Baltimore would be in the playoffs. It would be much more ideal if they didn't get in, obviously.

• Broncos at Bengals: This is an interesting "Eagles draft position game," as the more games each of these teams win the rest of the way, the better it is for the Eagles, in the event Philly doesn't make the playoffs. Both teams are 5-6, just like the Eagles, though I think Cincinnati has a chance to lose more games down the stretch than Denver, whose schedule is ridiculously easy the rest of the way. Denver still has the Niners, Browns and Raiders left on their slate of games. Therefore, I think it's best if the Bengals win this game, since the Broncos should be able to pile up a few meaningless wins down the stretch.

• Rams at Lions: Easy call here, as the Rams all but have a first-round bye on lock, and the Eagles could conceivably jump the 4-7 Lions for draft positioning.

• Cardinals at Packers: The Eagles obviously aren't catching the Cardinals for draft position, but they could jump the 4-6-1 Packers.

• Bills at Dolphins: The Bills are 4-7, while the Dolphins are 5-6. It's more realistic that the Eagles jump the Dolphins for draft position.

• Bears at Giants: The Giants are probably safely out of harm's way to select a quarterback worth taking in the 2019 NFL Draft, as it doesn't appear as though Justin Herbert is coming out. So really, who cares whether they draft, say, fourth, or seventh. The more games they lose, the more it hurts the Eagles' strength of schedule, which would help the Eagles in draft tie-breaker scenarios. Currently, there are four other teams with the same record as the Eagles, so that strength of schedule tie-breaker could be meaningful in draft positioning.

• Panthers at Buccaneers: There's still a small chance the Eagles could get a wildcard if, say, the Eagles and Cowboys both win four out of their next five games, which would mean that Dallas will have finished 10-6, and the Eagles 9-7. The Panthers are one of the teams that the Eagles could possibly pass for a wildcard, if so. And if the Eagles crap the bed? Well, they could pass the Bucs in the draft order.

• Colts at Jaguars: Indy is one of the teams threatening the Ravens' playoff berth. As noted above, the Eagles own the Ravens' second round pick, so it's better if Indy were to get into the tourney over the Ravens.

• Browns at Texans: The Browns are a half-game behind the Eagles at 4-6-1. Who'd have thought the Eagles might be drafting higher in the 2019 NFL Draft than Cleveland?

• Jets at Titans: The Eagles aren't catching the 3-8 Jets for draft position, but the 5-6 Titans winning would help.

• Vikings at Patriots: Again, as noted above with the Panthers, there's a small chance the Eagles could get a wildcard, and one of those ways is if the 6-4-1 Vikings have a late-season meltdown.

• 49ers at Seahawks: And one last time, the Seahawks are yet another team standing in the way of an Eagles wildcard, should the Birds be in the unlikely position to earn one.

• Chargers at Steelers: I feel like the Chargers are among the least objectionable contenders with Super Bowl aspirations.