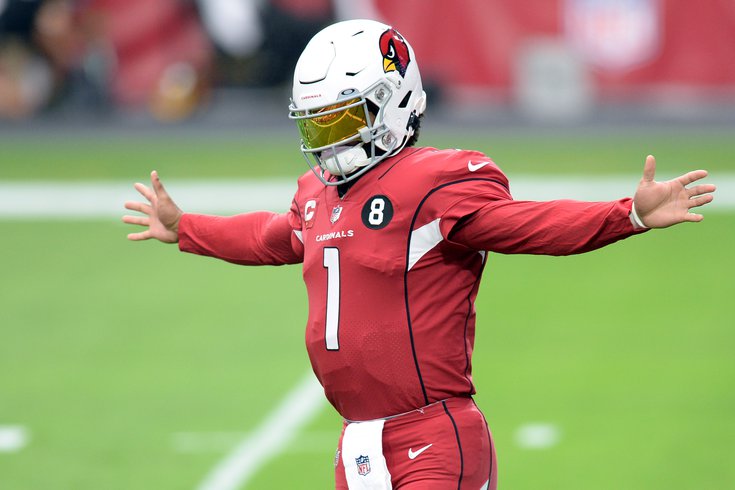 Kyler Murray looked great in his injury return in Week 13.

Week 14 is a timely reminder of how late season matchups can be a preview of a playoff matchup or the difference maker atop the draft. Even the Detroit Lions get little respect coming off their first win of the season. While the Eagles will be taking the week off, they will certainly be watching the Cowboys in Washington. The Raiders and Chiefs are another division matchup carrying playoff implications. The Ravens will look to bounce back from their last second loss last week as they take on the Browns in Cleveland.

The Eagles will be joined by the Colts, Dolphins, and Patriots on a bye this week. The Steelers are in Minnesota to open the week for Thursday Night Football, and the week closes out in Arizona as the Cards host the Rams.

There are a couple of games hovering at that 10-point spread, including the Giants getting 10.5 on the road against the Chargers. The largest spread of the week is in Green Bay, where the Packers are laying 11.5 at home against the Bears. Let’s look at every other side and total for Week 14:

The Steelers may have gotten a gift at the end of last week’s game against the Ravens, but more importantly they got the win. Things have gone from bad to rock bottom for the Vikings, as they blew a gift from the Lions, before handing Detroit its first win of the year. It’s more of the same for the Vikings who are 1-9 ATS in their last 10 games as favorites. The Steelers are only 5-7 ATS overall but get a major boost when the Vikings lose to Detroit and can’t cover as favorites.

Things seemed to return to normal for the Cowboys after they hammered the Saints on TNF, meanwhile the WFT picked up their fourth straight win as they edged the Raiders in Vegas. Just two games separate these two teams with Dallas atop the division, but it’s Dallas who has the advantage. Dallas is 9-3 ATS – they dropped 3 of 4 against the number before covering this past week against the Saints. Washington won four straight but still holds a 5-7 ATS record heading into this week.

The Chiefs may be back in the playoff hunt, but their offense is still missing in action. Way too many self-inflicted wounds for the Chiefs to get around for any convincing win, especially covering this line against the Raiders. Vegas will see their offense bounce back but won’t be able to cover this line. The Chiefs won five straight and have covered their last three numbers – with the last two being at home. The Raiders will bow out and eventually get blown out.

Another low total on the board this week as the Ravens failed to convert a game-winning 2-point conversion against the Steelers last week. The books clearly aren’t taking the bait from all the points scored in the fourth quarter for both teams. The Browns are in trouble but get the benefit of the bye to possibly knock the Ravens off their AFC North lead. It’s not the “same ol’ Browns” but it’s close. The Ravens have won four straight against the Browns, and Cleveland is just 2-10 in their last 12 ATS vs the AFC North.

The Titans come off the bye trying to make sense of so many injuries at key areas in their offense. The good news is the Jags are 100 percent cooked. The Titans will hope to be healthier on defense following the week off, as the Jags should also be somewhat fresh after barely making an impact last week against the Rams. As bad as the Titans have looked as of recent, the Jags are 0-14 ATS last 14 on the road.

One of the lowest totals on the board as the Texans are a rotating disaster each week, and the Seahawks still haven’t convinced the books they can score. The Texans lost to the Jets two weeks ago then were obliterated by the Colts on Sunday. While the Texans are 5-7 ATS on the year, they’ve only covered two of their last six games, and face the most desperate Russell Wilson has been in his career. Something to note, the Under is a combined 18-6 for both teams this year.

So much of the Saints season is dependent on the health of Alvin Kamara, but the Saints should be good enough to cover without him. The line does factor in Kamara’s chance of playing, making it a near TD spread, but the Jets also showed last week against the Eagles how bad they can truly be on offense. The Jets won’t be able to punt, pass, or kick against the Saints – let alone score. The Jets are just 3-9 ATS and they don’t have the same “Kamara Excuse” as their opponents.

The Panthers come off their bye week hosting a Falcons team that’s dropped three of their last four games. To be fair, Carolina also comes in with the same record over the same stretch, as evident by the 3-point line for home field advantage. Neither of these teams are particularly strong in covering the spread, as they both share the same 5-7 overall record coming into this game. If you want any edge, the Panthers have dropped four straight games at home.

Something to note with this high total – we see it again with the GB game – is the lower total that goes along with the spread. The Chargers are laying a big number at 10.5, but the total is at 44.5 and dropping. It’s a good indication the books think the Chargers run away with it in a lower scoring game – at least for the Giants. New York has dropped six of seven games on the road, and just 3-3 ATS away from home.

While the Vikings fans were certainly shocked with last week’s results, the Lions finally winning a game should come with little surprise. Detroit has fought hard this year despite its record and has covered four straight games. Go ahead and make that five straight, as Denver won’t be able to cover that larger number at home. Denver is just 3-3 ATS and are covering spreads on average by less than a point, which makes it more difficult to cover larger numbers. The Lions are 4-2 ATS on the road.

Both teams saw win streaks snapped last week with losses, although the Bengals suffered a worse fate being blown out at home. The Bengals have been shaky at home, just 1-4 ATS in their last 5 at Paul Brown Stadium. That’s a telling stat for two teams who come in with similar records both SU and ATS. The total at home for the Bengals is 4-2 on the year, with an average of just over 52 PPG, 4.5 points higher than the current total.

Tampa Bay is a strong 9-3 SU but just 6-6 ATS. The good news for Tampa is they’ve covered three straight games and face a Bills team reeling from their home loss on MNF. Buffalo has dropped two of their last three games, and even more concerning, is averaging just 10.3 PPG over that stretch. Tampa comes in winners of seven straight games at home, covering six of their last seven games at Raymond James Stadium.

Another large spread – the biggest on the board this week – and a lower total, as we see heavy expectations of a Packers blowout. Every metric from data to the eye test will tell you that Andy Dalton and the Bears offense can’t keep up with Aaron Rodgers. Green Bay has won 10 of 11, covering the spread in 10 of those 11 games. Chicago’s record is the same both SU and ATS, which is not great by any means at 4-8. Even worse for Chicago, they’ve dropped six of their last seven games.

One of the highest totals on the board this week boasts two teams with high scoring potential, so long as their QBs are healthy. Kyler Murray seems back, and Matthew Stafford seems able to play through all his injuries. While things change from year to year, the Rams may have the Cards number, as LA has won six straight games at State Farm. But the Rams still must face a Cards team that’s 10-2 SU / 9-3 ATS and winners of three of their last four games. L.A. dropped three straight before beating up the Jags. Arizona dominated the Rams back in week 4, 37-20 in LA.