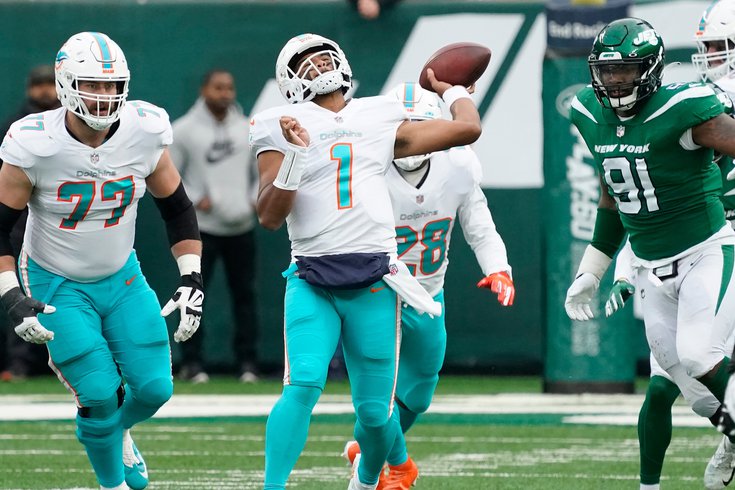 The Eagles hope the Jets can end the Dolphins' five-game winning streak on Sunday.

And so, each week we'll lay out a rooting guide for non-Eagles games on the NFL schedule, and yes, I'm aware that most of the below is obvious. You can also check out the latest Week 15 odds and read all my picks, here.

Because of the NFL is just making rules up as they go in 2021, the Eagles-Washington game was postponed to Tuesday night, so Eagles fans do not have a game of their own to watch on Sunday.

• Cowboys at Giants: The 6-7 Eagles are three games behind the 9-4 Cowboys, so it would take a minor miracle for the Eagles to catch them. The Eagles would have to win out, which would include a win over the Cowboys Week 18, and the Cowboys would also have to lose to the Giants and Football Team over the next two weeks.

Still, keeping that miracle alive for one more week is worth something, I guess, and the Giants can only hurt themselves by winning games down the stretch and messing up their draft positioning.

See all those 6-7 teams tied with the Eagles, as well as the 7-6 49ers? The Eagles would benefit from those teams losing. #Analysis. The obvious rooting interest games are as follows:

The Falcons play the 49ers in San Francisco, and in my opinion, it's best if the team the Eagles are currently trailing (the Niners) lose, so root for the Falcons.

As you're aware, the Eagles own first round picks from the Dolphins and (now almost certainly) the Colts in the 2022 NFL Draft. The Colts beat the Patri*ts on Saturday night, putting them in outstanding position to make the playoffs, though they still have work to do.

As always, the Eagles want the Dolphins to lose. Root for the Jets to end their five-game winning streak.

Otherwise, the Eagles will hope that some of the other teams in the AFC will threaten the Colts' playoff hopes, and keep the Dolphins out.

See all those 7-6 teams? The Eagles want all those teams to win. There are two obvious, clear-cut games:

The Bengals also play the Broncos in Denver. Because the Bengals are better, in my opinion, they are the ideal winner.

And then there's the 9-4 Titans, who hold a 1.5-game lead over the Colts, plus a season sweep advantage. They have a commanding lead in the AFC South, but a loss would creek the door open a bit for the Colts to steal the division. It's best if the Titans beat the Steelers.

• Cardinals at Lions: Want the Cowboys to have as low a seed as possible in the NFC playoffs? It's best if the Cardinals win.

• Packers at Ravens: The Ravens currently lead the AFC North, but they are struggling of late, and could fall out of the lead and into the wildcard hunt. It's best if they win to keep pace over the Colts and Dolphins. If you hate the Cowboys enough though, a Packers win could hurt the Cowboys' playoff seeding, so your view may vary.

• Seahawks at Rams: Maybe the Seahawks can end up with a better record than the Dolphins, thus helping the Eagles' pick in the draft order?

• Texans at Jaguars: Big draft order implications here, but irrelevant to the Eagles.