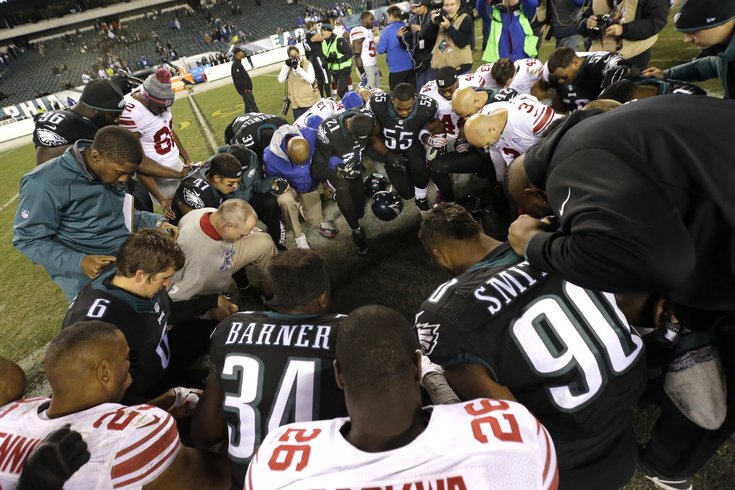 "Dear God, please don't let us be as terrible next year as we were this year."

For the gambling degenerates, here are my Week 17 picks. To note, the helmets indicate who I think will win the game, not cover the spread. At the end of the picks, I'll note a few teams that I like based on the spread.

Jets (-2.5) at Bills: This is Rex Ryan's Super Bowl... which he'll lose. The Jets have been a legitimately impressive team this season, and this is a "win and in" scenario for them.

Patriots (-9.5) at Dolphins: The Pats still have to fend off the Broncos for home field advantage throughout the playoffs, so they would be wise to cheat in their final regular season game. "Earlier this season, we decided not to cheat against the Eagles because we thought they were a weak opponent," said Bill Belichick earlier this week. "That was a tactical error on our part, and I apologize to the fans for my lapse in judgment. You can all go back to being proud about cheering for the frauds we are soon enough. While the Dolphins are absolutely awful, we learned our lesson and will be cheating in some way no matter who the opponent for as long as I'm here."

Saints at Falcons (-5.5): The Falcons started the season strong at 6-1, then they revealed themselves to be, you know, not good, by losing six straight games, four of which were to losing teams. The last two weeks have been wins, including ruining the Panthers' undefeated season. The Falcons can finish strong, as in "2011 Eagles strong," and further screw up their draft position.

Ravens at Bengals (-9.5): The Ravens have played a big chunk of their season without their QB, their RB, their best WR, and their best pass rusher. Obviously, you're not going to win many games when that happens. The Bengals are still playing for a first round bye, and should be able to take care of business.

Steelers (-10.5) at Browns: The Steelers may be the best team in a long time not to make the playoffs, while garbage teams like the Redskins and Texans will.

Jaguars at Texans (-6.5): The Texans will win the AFC South, unless all nine of the following things happen, per Sean Wagner-McGough of CBS:

So the Texans will still be playing hard, I guess.

Titans at Colts (no line): There never seems to be a line on Colts games because of their never-ending uncertainty at quarterback, which I find annoying for some reason.

Redskins at Cowboys (-4): The Redskins will be judicious about resting their starters, which is why the Cowboys are favored by 4. Doesn't matter. The Cowboys are trash and are going to lose anyway.

Eagles at Giants (-3.5): There's no point whatsoever in analyzing matchups for this wholly useless season finale. However, the Eagles have every incentive to lose this game for draft position, a more favorable schedule in 2016, and a handful of other reasons. Naturally, that means that they'll play their best game of the season and win by 60, because that's the way this season has to end.

Lions at Bears (Pick 'em): One very minor thing for Eagles fans to watch this season was the Lions' record, as the Eagles hold their third round pick. The Lions will win and further mess up that pick after starting the season at 0-5.

Buccaneers at Panthers (-10.5): The Panthers have not yet clinched home field throughout the playoffs, with the Cardinals still breathing down their necks, so they'll be a full go Sunday afternoon.

Raiders at Chiefs (-7): As we say every week, Big Red is on fire. The Chiefs' last nine games:

The combined score over that span: 255-111. They are +144 over that span. The Chiefs were dead and buried at 1-5, but now have the longest win streak in the NFL. I'll continue to ride the hot hand ... until Andy inevitably reaches his playoff loss destiny.

Chargers at Broncos (-9): If the Broncos win, they clinch a first-round bye, with a chance for home field advantage throughout the playoffs. If they lose, they could be as low as the 6 seed. Obviously, they have a lot to play for on Sunday.

Seahawks at Cardinals (-6.5): This is such a good game, and perhaps a playoff preview. The Cardinals are the best team in the NFL right now, with the Seahawks not all that far behind. The Seahawks, however, aren't playing for much. They're either going to be the 5 seed or 6 seed, and they could wind up being the 6 seed even if they win. They may be better served to hold off on showing anything but vanilla looks, thus giving the Cards more tape to study.

Rams (-3) at 49ers: Another game where all that is at stake is draft position. I'm not sure why Jeff Fisher still has a job, but he'll have a chance to finish with a 0.500 record. Yay.

Vikings at Packers (-3): And this would be for the division. I believe the Vikings have a better roster, if you strip out the quarterbacks. But clearly, while Teddy Bridgewater's future is promising, he does not compare to Aaron Rodgers, especially at Lambeau.