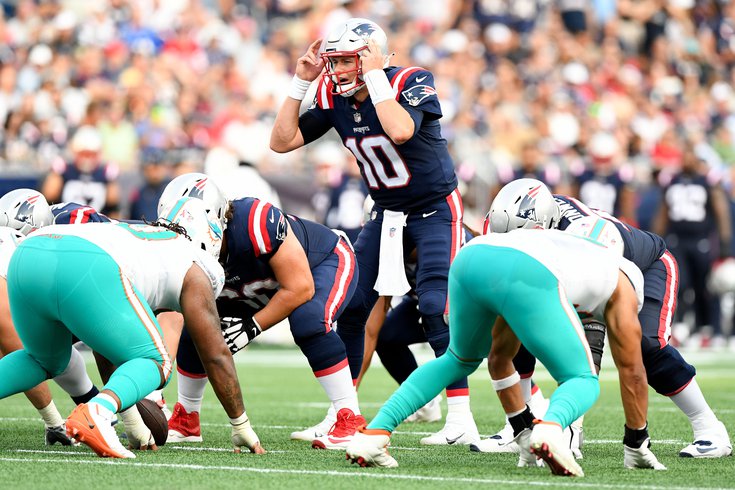 Eagles fans will also be fans of Mac Jones and the Patriots against the Dolphins Week 18.

Our regular season rooting guide series will conclude this week, and we'll go out with a bang, as there's plenty to watch for during the NFL's slate of games. Let's start this week with the Eagles' most uncomplicated rooting interests, their draft positioning, and then we'll get to potential playoff opponents, 2022 schedule considerations, and more.

As you're aware, the Eagles own Miami's first-round pick in the 2022 NFL Draft. We explained in some boring detail the possibilities of where that pick could ultimately land, but the Cliff's Notes version is that it'll be anywhere from pick No. 10 (extremely unlikely) to pick No. 16. More realistically, it'll end up somewhere between the 12th and 16th picks.

First and foremost, the Eagles will be rooting for the Patriots to beat the Dolphins (duh). But to move up in the draft order, the Eagles need the 7-9 teams to win. They are the Browns, Broncos, Vikings, and Falcons. Their games:

The Miami pick will almost certainly move up in the draft order if they lose and either the Vikings or Browns win, on a strength of schedule tiebreaker. Both of those teams are favored, by the way, according to Sidelines.io. A Dolphins loss and a Broncos or Falcons win does not guarantee a move up in the draft order, and in fact it remains very unlikely in the case of the Falcons. But again, if you care about the nitty-gritty of all that, go here.

• The Colts are 15.5-point favorites over the Jaguars, and if they win, they're in. The Jaguars also clinch the No. 1 overall pick with a loss, so they could be in tank mode.

Still, you know, root for a Jaguars miracle. If the Colts lose, they could still get into the playoffs, but they would need a lot of help. A Chargers or Steelers win would put the nail in their coffin. Their games:

MORE: Week 18 NFL picks: Rounding up the experts' predictions for Eagles vs. Cowboys | Mailbag: Should the Eagles spend big on a free agent wide receiver this offseason?

There are five games that will affect seeding in the NFC playoff race.

We dove much deeper into the probabilities earlier in the week, but the Eagles will face one of the Buccaneers, Rams, Cardinals, or Cowboys in the first round, with by far the mostly likely opponent being the Buccaneers. But here's a handy dandy little visual of what has to happen for the Eagles to play each team:

Again, the Eagles should be rooting for the Falcons, who suck, and won't be good anytime soon. They should also root for the Steelers, who have to find a new quarterback this offseason.

• Football Team at Giants: If the season ended today, the Giants would have two picks in the top 10 — their own at fifth overall, and the Bears' pick at ninth overall. Their own pick can rise as high as third overall. A Giants win would cap their highest pick possibility at fifth overall.

If the Giants lose, they won't move up if the Texans and Jets also lose. Their games:

The Bills need a win to clinch the AFC East, and the Titans can clinch the 1 seed with a win over the Texans, so they'll both be going all out.

Hard to care much about these games