Week 18 NFL picks: Rounding up the experts' predictions for Eagles vs. Cowboys 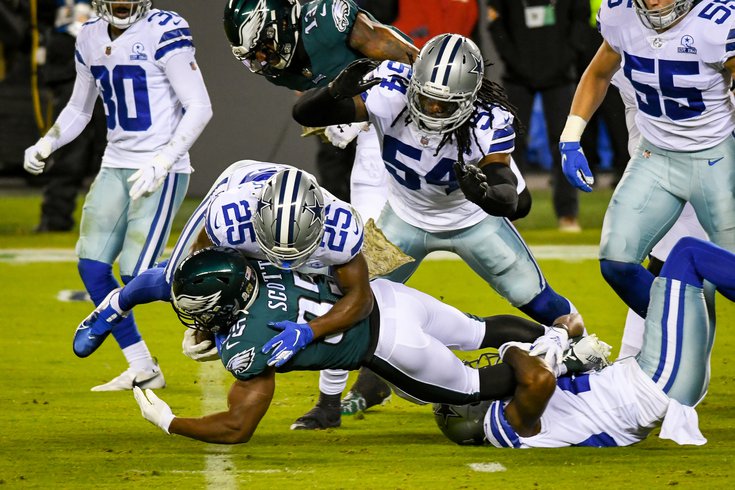 Boston Scott being taken to the ground during the Philadelphia Eagles last home game against the Dallas Cowboys.

The Eagles will conclude their tour of the NFC East — and the NFL regular season for that matter — at home against the Cowboys Saturday night in a game the NFL decided to flex to prime time because... well... they're just in it for the money (what else is new).

With so few games in Week 18 with any real competitive value, Philly and Dallas are big names in big markets and it's probably a safe bet that fans will tune in to watch what could descend into Gardner Minshew vs. Cooper Rush by halftime.

Neither team can really control their first round opponent, and even a win and earning the 6-seed won't particularly help Philly. Still, outlets across the football media landscape picked the Eagles vs. Dallas matchup and we are here to round them up, as we always are. Let's dive right in...

• PhillyVoice: The majority of our writers think the Cowboys win this one, mostly because they're more likely to play their starters than Philly is. Here's Eytan Shander's take on why:

The Eagles are looking like they will sit their starters, which should allow the Cowboys to win this game rather easily. Dallas still needs this win for seeding purposes, and the NFL moved it to Saturday to help further the playoff drama on Sunday. The Eagles would stand a decent shot of winning this game — at least covering — if they ran out their starters, but they would rather keep a couple of guys healthy. Gardner Minshew won’t be outplaying anyone on Dallas like he did against the Jets, so don’t hold your breath for any major upset.

The amazing Eagles run will end in a rather anti-climatic fashion. The Birds are making this decision to sit guys, and do not get any benefit of the doubt in some bizarre Twitter hypothetical. No, the Eagles would not be “10-7” automatically if they started Hurts instead of taking a planned lump. The Eagles lose 27-12 and the loss goes down on the team and coach’s record.

• Inquirer.com: Two of their three writers are taking the Cowboys, but not Josh Tolentino, who has the Eagles winning this one by a field goal, 24-21.

My inclination is Sirianni either fully rests his starters or allows them to play one or two drives before pulling the first team. If Hurts winds up sitting for a majority of this game, which would probably be the wisest decision, then it’s Minshew Mania time. We’ve already witnessed Minshew run an efficient and effective offense during his emergency start last month. He’s certainly capable and fits the backup role well. ...

NFC East matchups still tend to be entertaining, regardless of the circumstances. Looking ahead to the playoffs, the Eagles should absolutely prioritize health. But Sirianni possesses a unique trust with his backup quarterback, and the first-year coach will be looking to avenge a blowout loss at Dallas in September.

• NJ.com: All five of their football writers are taking the Cowboys in this one, including Daryl Slater, who for some reasons thinks it will be a shootout.

Both teams are already in the playoffs. But the Cowboys will be plenty motivated to not head into the postseason with back-to-back losses, after falling to the Cardinals at home last week. Dallas in a squeaker.

• Bleeding Green Nation: Just two of seven writers are picking the Eagles in what is essentially a January preseason game Saturday.

• The Athletic: Both Zach Berman and Bo Wulf have the Cowboys to win. Here's more from Berman...

It’s hard to make a sensible prediction without knowing who will actually be playing. Considering the way Nick Sirianni approached the preseason and has gone with walk-throughs instead of practices on Wednesdays throughout the second half of the season, I would be surprised if he plays his starters many snaps on Saturday. The Eagles can do fine with Minshew at quarterback, and I’d expect the Cowboys to sit some key players, too. The point spread moved to Cowboys minus-4.5, but the fact that they’re still favorites matters. Don’t expect offensive firework in an Eagles loss. The Eagles finish the regular season 9-8 and will likely play Tampa Bay in the opening round of the playoffs. Cowboys 20, Eagles 16

Like a lot of games this week, this prediction is largely about who wants to win. Even before the Eagles opened the week by putting a dozen players on the COVID-19 list, including many starters, I was operating under the assumption they would rest their starters. And while they have one of the best backup quarterbacks in Gardner Minshew, my other assumption is that the Cowboys will want to wipe the stink of their recent offensive showings and give themselves a chance at more home playoff games.

• ESPN: Four of their 11 experts are picking Philly to win this game.

How will these teams play this game? Both are in the playoffs, but seeding is at stake. The Cowboys haven't looked good on offense in recent weeks, while the Eagles have found life behind their running game. Jerry Jones hinted the Cowboys will play to win. The Eagles have COVID concerns and might rest some players. Dallas will take it.

• CBS Sports: All seven of their experts are predicting an Eagles loss in Week 18.

• ProFootballTalk: Both Mike Florio and Michael David Smith are picking the Cowboys over the Eagles.

MDS’s take: Neither of these teams has much to play for, but it sounds like the Cowboys think it’s worth risking injuries to try to improve their playoff seed, and I think they’ll get the win.

• USA TODAY Sports: Unlike most outlets who are skewing Dallas, five of their seven writers are picking the Birds on Saturday. Hm.

• Bleacher Report: Cowboys 24, Eagles 20 (NOTE: Four of their six writers are taking the Cowboys to cover the 7-point spread.)

The Dallas Cowboys and Philadelphia Eagles have both secured playoff berths, with the former the NFC East champions and the latter a wild card. With both teams locked into the playoffs, there has been talk of resting starters.

Eagles head coach Nick Sirianni is considering resting players like nicked-up quarterback Jalen Hurts. However, Dallas team owner Jerry Jones insisted that the Cowboys won't be giving any of their stars the night off—especially with a chance to move up as far the NFC's No. 2 seed on the line.

However, despite that uncertainty about who will or won't be playing, Kenyon is putting his metaphorical moolah on the Eagles and taking the touchdown with the home 'dog.

"They've had a cakewalk schedule over the past month, but the Eagles are 6-1 in their last seven games and enter week 18 as one of the NFL's hottest teams," he said. "I'm all-in on the Eagles right now, who have seemed to find their recipe for success with one of the league's most dynamic rushing attacks. The Cowboys looked lost on offense in a 25-22 loss to the Cardinals at home last week. The Cowboys should rebound and still win this game, but give me the Eagles covering a touchdown at home."

The majority of our experts either expect Philly to keep it close or don't believe Jones, because they are siding with Kenyon in taking Philly.

• Sheil Kapadia, The Athletic: Sheil picks games against the spread every week, and this week he thinks the Cowboys win and also cover the seven points.

The Eagles, meanwhile, are locked into the six or seven seed. They had 12 players go on the reserve/COVID-19 list this week, and it seems likely that they’ll be playing a bunch of backups in this one.

Both teams clinched playoff spots, and Dallas missed out on its chance for home-field with the loss to the Cardinals. The Eagles have won the last two in the series at home, which makes this a trouble spot for Big D. Will this be more of a dress rehearsal in the second half?

The Cowboys need to be careful about their limited chances for a top-two seed, which doesn't mean much anyway with the Packers already having clinched the No. 1 seed, home-field advantage and lone playoff bye head of them. They could be facing the Cardinals in a rematch from their Week 17 and there's also a chance they play the Eagles in consecutive weeks, too. They would be smart to rest key players on both sides so they are at full strength for the wild-card round. The Eagles might play starters a little more for tuneup purposes, especially defensively. Flip a coin when expecting to see not much of Dak Prescott or Jalen Hurts.