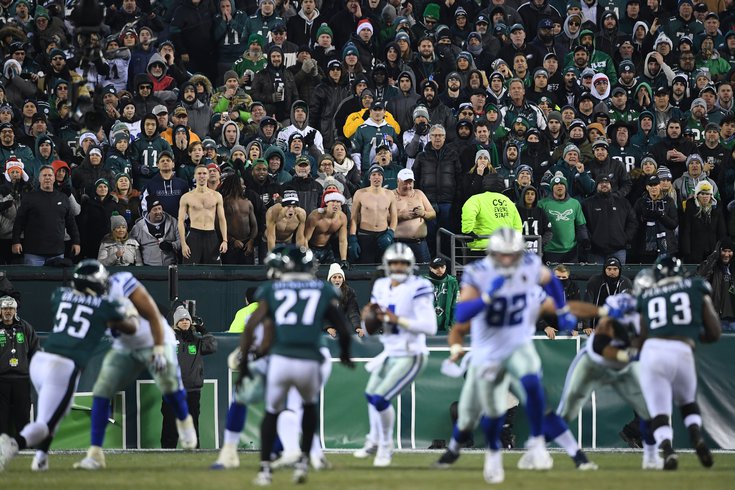 Three years from now, Cowboys fans will cite the Cowboys' record over the Eagles, and include this meaningless likely win as part of the equation.

For the gambling enthusiasts, here are my Week 18 NFL picks. To note, the team logos indicate who I think will win the game, not cover the spread. At the end of the picks, I'll note a few teams that I like based on the spread — with all Week 18 lines coming via Sidelines.io.

Chiefs (-10) at Broncos: The Broncos were eliminated from playoff contention last week. The Chiefs still have a chance at earning the 1 seed, but they would need a win plus a Titans loss to the Texans. They will clinch at least the 2 seed with a win, so the Chiefs will be going all out to win this game.

Cowboys (-7) at Eagles: It's almost better for the Eagles to lose this game, as we laid out on Monday. If they win, they will very likely have a date with Tom Brady in Tampa in the wildcard round. If they lose, a more favorable wildcard round opponent, such as the Rams, is more possible.

The Eagles will almost certainly be resting starters in this game, while the Cowboys have said that they will play theirs. We'll see how long Mike McCarthy keeps his best players out there. This seven-point spread would say, "not very long."

Bengals at Browns (-6): The Bengals locked up the AFC North with their huge comeback win over Kansas City Week 17. Joe Burrow will rest up for the playoffs in this game, and a bunch of his better teammates probably will as well.

Packers (-4) at Lions: You know you're really bad when you're playing a team that already has the 1 seed on lock, and yet you're still underdogs against their second-stringers. Still, what the hell. Give me the Lions.

Bears at Vikings (-4): Imagine that the quarterback of your favorite team is Kirk Cousins, and you have to keep either him, the head coach, or the general manager, and somehow you concluded that you'd keep Cousins. Well, that's where Vikings fans are right now.

You are told you have to keep exactly one of these three.

Not that the Bears are any better off.

Football Team (-7) at Giants: It's fun watching Joe Judge melt down and all, but at some point Eagles fans should want him to shut up so he doesn't talk his way into getting fired, after he was reportedly already safe.

Colts (-15.5) at Jaguars: BLG said on the podcast that the Colts haven't won in Jacksonville since 2014! It checks out. There have been a lot of terrible Jaguars teams during that span. If the Colts win, they're in. If they lose, they wouldn't definitively be dead, but they would need the following to occur to make the playoffs anyway:

Unfortunately for Eagles fans hoping for a better draft pick from the Colts, the Jaguars can clinch the No. 1 pick in the 2022 NFL Draft with a loss, so they should be in tank mode.

Steelers at Ravens (-5.5): Both of these teams are still mathematically alive, but they also both need a lot of help to get in even if they win this game. Since realignment in 2002, there has only been one year (2013) that neither the Steelers nor the Ravens made the playoffs.

Titans (-10) at Texans: If the Titans win, they're the 1 seed, with a healthy Derrick Henry likely returning for their playoff run.

Saints (-4.5) at Falcons: The Saints need a win and a 49ers loss to get in, which isn't crazy, since the Niners are playing a Rams team trying to lock down the NFC West.

As an Eagles' slant to this game, the winner of this game will clinch second place in the NFC South, and will play the Eagles in Philly in 2022.

Patri*ts (-6.5) at Dolphins: The Patri*ts are in the tourney, but they need a win and Bills loss to win the AFC East. I imagine they'll be doing some scoreboard watching in the other game, and if the Bills are hammering the Jets, some important Pats starters could come out of this game.

Panthers at Buccaneers (-8): Bruce Arians has already said that the Bucs will play their starters. They could still land in the 2 seed, which could earn them an extra home game along the way in their quest to repeat, so that decision makes sense. It's also good for the Eagles, since the Bucs are the Birds' likely first-round opponent.

49ers at Rams (-4.5): This is a rare game this week in which two teams have a lot to play for. If the 49ers win, they are in. If the Rams win, they win the NFC West. The Niners have won five straight in this rivalry, including a comfortable 31-10 win in San Francisco Week 10.

The Rams have won five straight games this season to take control of the NFC West, but they have gotten shaky play from Matthew Stafford, and the Niners have more on the line, fighting for their playoff lives.

Seahawks at Cardinals (-6.5): The Cardinals have more to play for, as they can still win the NFC West with a win and a Rams loss, but this could also be Russell Wilson's final game as a Seahawk. I'll take the tangible need for the game over sentimentality.

Chargers (-3) at Raiders: And last but not least, a pair of perpetually bad teams playing each other for the right to go to the playoffs. One of them has to get in! And so, I'll once again set myself up to be fooled/disappointed by the Chargers.