And so, each week we'll lay out a rooting guide for non-Eagles games on the NFL schedule, and yes, I'm aware that most of the below is obvious. You can also check out the latest Week 3 odds and read all my picks, here. Ideal winners bolded.

Before we get started this week, let's take a way-too-early look at Tankathon.com. 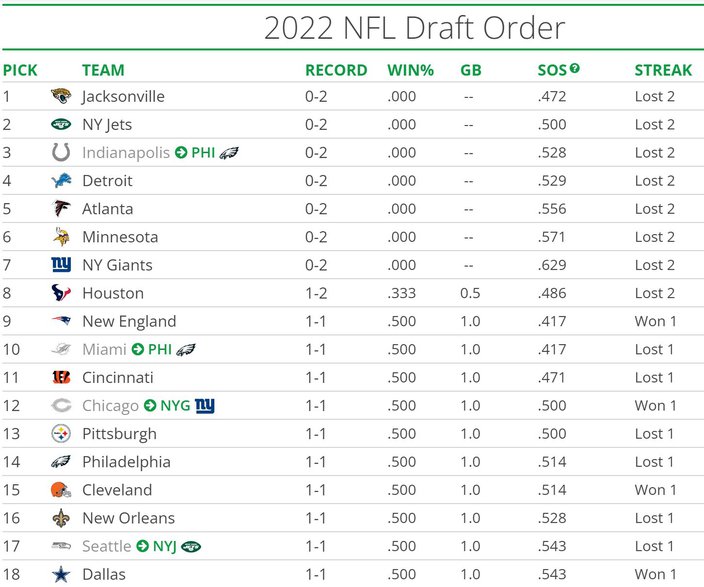 OK, onto the Sunday games.

• Colts at Titans: This is a huge early-season game for the draft pick that the Colts owe the Eagles. The Titans are the Colts' biggest obstacle to winning the AFC South, and if Tennessee can win this game, they'll have a 2-1 to 0-3 advantage, with a head-to-head win in the books. The Titans' odds of winning the division if they win this game have to be, what, like 80 percent?

• Washington at Buffalo: Eagles fans should be Bills fans all season long, because they play in the same division as the Dolphins. But also, obviously every WFT loss is good for the Eagles' chances of winning the division.

• Falcons at Giants: The fallout in North Jersey that will occur if the Giants were to lose to this horrendous Falcons would be fun to watch.

• Saints at Patri*ts: Like with the Bills above, the more games the Patri*ts win, the better. I know, tough to root for. And then also, the Saints are a potential wildcard contender.

• Bears at Browns: The Giants own the Bears' first-round pick in 2022, so the more games they win the better.

• Ravens at Lions: Previously, my feeling was that it would be ideal if bottom-feeder teams like the Lions, Texans, Jaguars, etc. lost as many games as possible so that a team like the Giants — who I feel could be in contention for a super high pick — won't land a pick in, sayyyy, the top 3. The more I think on it, though, the more I believe that the Dolphins have a chance to be really bad this season, so maybe it's just best for the Eagles if these bottom-feeder teams win some games.

• Cardinals at Jaguars: See the Lions "bottom-feeder" point above.

• Dolphins at Raiders: The Dolphins have a mess on their hands at quarterback, and they're coming off a 38-3 shellacking at home against the Bills. The Eagles' first-round pick from Miami has a lot of promise.

• Buccaneers at Rams: Yeah, the Panthers are 3-0, but they'll fall off and the Bucs will eventually run away with the NFC South. The Rams, meanwhile, are in a much better division, and therefore more of a direct competitor with the Eagles for a wildcard.

• Seahawks at Vikings: If the Seahawks win, they'll be 2-1 and the Vikings will be 0-3. Minny would be in terrible position for the playoffs. If the Vikings win, both teams will be 1-2. I think that these two teams being 1-2 is the better outcome.

• Jets at Broncos: Only relevant in that the Eagles play both teams later this season. It's better if the Jets win, for high draft pick potential.

• Packers at 49ers: Like we noted above with the Bucs, the Packers are likely to easily win the NFC North, which makes the Niners more of a competitor with the Eagles for a wildcard.