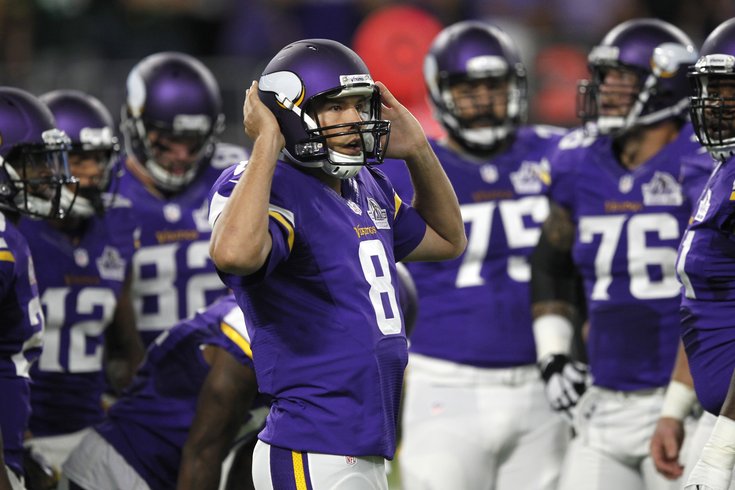 The last time the Giants faced Sam Bradford, he torched them in "Game 7" of his #LastSevenGames.

For the gambling degenerates, here are my Week 4 NFL picks. To note, the helmets indicate who I think will win the game, not cover the spread. At the end of the picks, I'll note a few teams that I like based on the spread.

Dolphins at Bengals (-7.5): The Dolphins were one 46-yard Cody Parkey field goal attempt away from losing to the Browns at home, and going 0-3. Meanwhile, the Bengals are 1-2 and facing something close to a must win game. Love Cincy here.

Every year the Jags are pegged as a potential breakout team, and then every year they don't even come close to breaking out.

Browns at Redskins (-8): The Browns are going to win a game this year. That's about the nicest thing I can say about them. They had a golden opportunity last week at the end of regulation, but Browns gonna Brown. After recovering a Miami fumble at the Dolphins' 28 yard line, the Browns opted to take a knee (!) and then attempt a 46 yard field goal with a kicker who was unemployed the day before. Take a knee?!? Are you kidding? GET MORE YARDS, YOU FREAKING IDIOTS. Anyway, Parkey predictably missed, and the Dolphins won in OT.

So again, the Browns will find a way to win a game this year. The Redskins will try to avoid the embarrassment of being the team to lose to them. I can actually see this happening, but I'm not dumb enough to pick it.

Seahawks (-1.5) at Jets: Last Sunday, Ryan Fitzpatrick was intercepted six times. Five of them were on five consecutive possessions to close the game. That really shouldn't come as a huge surprise, seeing as Fitzpatrick has the highest career INT percentage among all active starting quarterbacks, at 3.43 percent. And now they get the Seahawks. Good luck.

Bills at Patriots (-4.5): The Patri*ts almost never lose at home, because they cheat.

Panthers (-3) at Falcons: The Falcons' offense has been really good this season. Unfortunately, their defense remains bad. The Panthers are the far more balanced team, and should take care of the Falcons after losing to upper-tier teams like the Vikings and Broncos.

Raiders at Ravens (-3.5): The Ravens are the most unimpressive 3-0 team in recent memory. Their unbeaten streak ends Sunday.

Lions (-3) at Bears: The Lions and Bears both have bad defenses. The Bears have a bad offense to go along with their bad D, while the Lions' offense is competent. So, I'll take the team with the one competent unit on the field. #Science.

Broncos (-3) at Buccaneers: Many thought this could be a breakout year for the Bucs. I don't see it. Additionally, Tampa hasn't had a winning record at home since 2008, and are 17-40 at home since 2009. That's not much of a home field advantage. Oh, and that Broncos defense is really good, in case you hadn't noticed.

Rams at Cardinals (-8): I have no idea what to think of the Rams at all. They scored nine points over the first two weeks, and then put up 37 Week 3. Their defense can make plays, and they seem to play relatively well against their division rivals. We'll take the Cardinals here, but with very little conviction.

Saints at Chargers (-3.5): In case you missed our NFC Hierarchy/Obituary this week, here are some various Saints defense stats/rankings:

Is that bad? I don't love the Chargers either, but they should able to put up points against New Orleans' slop defense.

Cowboys (-2.5) at 49ers: The Cowboys could be without Dez Bryant and La'el Collins, and they also have a pair of good, banged-up players in Tyron Smith and Orlando Scandrick. This line is only 2.5 points because of the Cowboys' injuries, but the Niners are just so bad. Easy money.

Chiefs at Steelers (-6): The Eagles may have exposed the Steelers a bit last week, particularly on defense. I like the Steelers to bounce back with a win, but six points is a lot to cover against a playoff team.

Giants at Vikings (-4): The Vikings have one of the best defenses in the NFL, and look like a legitimate contender, as they've given quarterbacks better than Eli Manning absolute fits this season. Meanwhile, the Giants remain one of the more overrated teams in the sport. I'm not sure why this line is only four, but it's a bargain.