Week 6 NFL picks: Rounding up the experts' predictions for Eagles-Giants 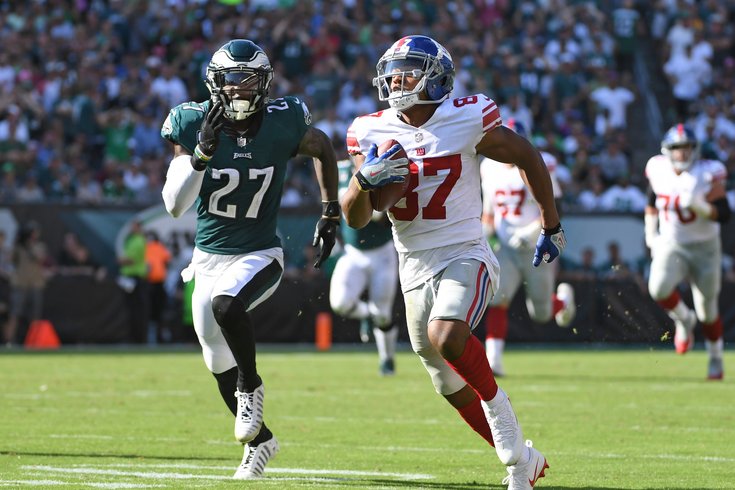 Coming into the 2018 NFL season, you would've been hard-pressed to find anyone who thought the defending Super Bowl champions would be 2-3 heading into their first division game of the season against the Giants on Thursday night, especially if you said that the Eagles would have Carson Wentz back for three of those games.

But here we are.

Now, the Eagles need a win to pull themselves back to .500 on the season — or risk falling into last place in the NFC East.

We've broken down the injuries, pointed out the key matchups to watch and offered our own predictions for this one. Now, as we do every week, it's time to take a look around the nation to see how the various experts, both local and national, think Thursday night's matchup is going to play out.

•  PhillyVoice staff: For the second week in a row, four out of five picked the Eagles. The lone exception? This guy right here. Here's part of what I wrote in explaining my 27-26 Giants' win:

After saying a I didn't have a good feeling about the Vikings game, I still picked the Birds to win. Talk about a Super Bowl hangover.

This isn't the same team, and shouldn't be treated as such. They lack depth in areas where they seemed to have plenty last year, and not even the return of their franchise quarterback has been able to spark an offense that was among the most dangerous in the league last year. On the defensive side of the ball, there's liabilities in the secondary and Thursday night could be a long one, especially with a potential Jalen Mills-Odell Beckham Jr. matchup. The Eagles have allowed a 100-yard receiver in four of their first five games — and that's not even counting all the yards Mills has allowed via pass interference penalties.

It also seems like Jim Schwartz's unit has totally forgotten how to create turnovers, something they were so good at last year, especially in big moments.

•  ESPN staff: It's still early, as just three of their national experts have offered up picks so far, with two of them taking the Birds to win.

•  CBSSports.com staff: Just six of their eight experts have made picks so far, but five of them are picking the Giants to win on TNF, including Pete Prisco, who predicts a 27-21 win for New York.

The Eagles just don't look right, and it starts with the offensive line. The receivers aren't getting open, either. The Giants looked better on offense last week against the Panthers, and I think that carries over here. On a short week, I will take the home team.

[Yes, they actually picked a tie, although to be fair, this is more for the gamblers out there. And a tie, in that world, means a win for the Giants. Two of their three experts picked the Giants +3.]

The home team has won and covered the spread in all five Thursday night games this season, and the majority of our panelists predict that streak will be extended when the New York Giants host the Philadelphia Eagles to kick off Week 6. ...

For what it's worth, each of the last five meetings between these teams has been decided by five points or fewer. Expect this one to be close as well.

•  OddsShark: With the exception of last week, their computer models have been incredibly accurate this season when it comes to the Eagles. Hopefully that trend continues this week, since they have the Eagles winning in a close one.

The Eagles aren’t what they were a year ago. The Giants may not be, either. At least for one night.

Carson Wentz has not played particularly well in his return from last year’s knee injury, but I’m expecting him to have a good game in a division contest the Eagles have to win.

•  SBNation staff: Five of their seven experts are taking the Eagles over the Giants — which is the same number that took the Eagles to beat the Vikings ... and the Titans.

•  Philly.com staff: I've run out of free articles for the month, so you'll have to head over there and check out their predictions for yourself.

•  NBC Sports Philadelphia: Four of their six experts are picking the Eagles, including Reuben Frank, who sees a 29-27 win for the Birds.

Weird things happen on short weeks, so anything's possible, but I think the defense plays OK against the Giants and the offense gets its act together and the Eagles escape East Rutherford with a win. I'm looking for three takeaways, a big game from Nelson Agholor and a hold-your-breath 29-27 win that gets the Eagles back to .500.

MORE: Safety Blitz with Malcolm Jenkins: 'I would say our backs are against the wall'

•  NJ.com staff: Six of their eight writers are picking the Eagles over the Giants, including Birds beat writer Zack Rosenblatt:

The Eagles are coming off their first two-game losing streak since 2016. They're reeling, injured, bruised and battered. They just lost Jay Ajayi, their lead running back, for the season. Yet, they're still significantly more talented than the Giants and Carson Wentz is getting into a groove. If the Eagles offensive line can get its act together, this has the potential to become lopsided. The pick: Eagles 24, Giants 17

•  Philly Influencer staff: Four of their six writers are taking the Eagles. One of the two who is not is PhillyVoice contributor Nick Piccone, who has the Giants coming away with a 31-24 victory:

Bad game. Short week. Giants always seem to play the Birds tough. The Eagles are having trouble regaining what they had last season. It’s not over, not by a long shot, especially in the NFC East. But it’s hard to confidently pick them to win a game now. Even if it is the New York Football Giants.

Mathematically, the season isn’t over for the loser … at least, if the loser is the Eagles, who have every reason to believe better times are coming. They do lose Jay Ajayi from the running game and need the others in the backfield to fill in the gap immediately, but he hasn’t been at full strength all season, so it’s not a huge transition. Their secondary has a chance to get out of their own way simply by facing Eli Manning, who threw two hideous interceptions in the second half of their loss to the Panthers. The Giants’ biggest problem is that Odell Beckham’s criticism is a problem, but is not inaccurate.

The Eagles' cornerbacks are no match for Giants wide receivers Odell Beckham Jr. and Sterling Shepard outside. But Philadelphia's front will perform better than it did against Minnesota to pressure Eli Manning, and Carson Wentz will be the next mobile passer to have the number of New York’s defense.