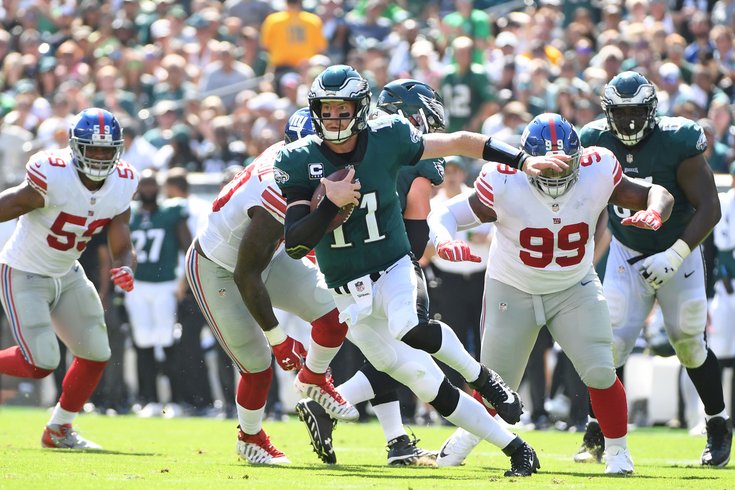 To say that the Eagles need to pick up a win over the Giants on Thursday Night Football would be a bit of an understatement.

Sure, a loss wouldn't signify the end of their season, but it would put them right on the edge. Following this crucial NFC East matchup, their first of the year, the Eagles host the 3-2 Panthers before traveling to London to face the Jaguars before hitting the bye and with the way this team has been playing, none of these games are feeling like a slam-dunk victory.

That being said, they'll need to win this games, because after the bye, their schedule is only going to get tougher. The good news is, the Eagles have owned the Giants over the past decade.

The Eagles have won 16 of their last 20 matchups against the Giants.

Will the Eagles' recent dominance over the Giants continue on Thursday night? Here's how we see the game playing out.

The Eagles aren't inspiring much confidence at the moment, with their offensive line woes, carelessness with the football, their inability to stop the deep ball, and a wide assortment of injuries. However, the Giants inspire even less confidence, since, you know, they just suck at football.

It's likely going to be the kind of a rainy, ugly game that is typically won in the trenches, where the Eagles have an overwhelming advantage, even if their trenches on both sides of the ball have not lived up to expectations so far in 2018.

This is my last try at giving the Eagles credit for having a good offense. The Giants give up just around 26 points per game — a threshold Philly hasn't crossed yet this season. They are also one of the worst teams in the NFL against the run. Yes, I know, Jay Ajayi is gone and Le'Veon Bell isn't here yet, but if the Eagles can keep the ball and avoid stupid mistakes, they can attack New York's defense in both phases and succeed.

I expect there to be plenty of offense from Odell Beckham Jr. and Saquon Barkley, but the Eagles have enough firepower to outgun them. I think. I am usually wrong. So I am picking Philly to finally break through on offense and prevail, 31-27. And if they don't, I give up.

I'm not going to lie, we've been terrible at picking games this season. None of us has a record over .500 on the season and as a group we're a combined 9-16 predicting Eagles games this year. Over the last two weeks, we're just 1-9. Something needs to change.

After saying a I didn't have a good feeling about the Vikings game, I still picked the Birds to win. Talk about a Super Bowl hangover.

This isn't the same team, and shouldn't be treated as such. They lack depth in areas where they seemed to have plenty last year, and not even the return of their franchise quarterback has been able to spark an offense that was among the most dangerous in the league last year. On the defensive side of the ball, there's liabilities in the secondary and Thursday night could be a long one, especially with a potential Jalen Mills-Odell Beckham Jr. matchup. The Eagles have allowed a 100-yard receiver in four of their first five games — and that's not even counting all the yards Mills has allowed via pass interference penalties.

It also seems like Jim Schwartz's unit has totally forgotten how to create turnovers, something they were so good at last year, especially in big moments.

Sure, our record making picks isn't any better than the Eagles' season record, but someone has to be the bad guy and take the Giants on Thursday night.

Through the first five weeks of the season, the Eagles have allowed the second-fewest rushing yards per game in the NFL. Weaknesses have begun to spring up elsewhere, but stopping the run has remained a strength during a tumultuous start to the season.

Weirdly enough, that probably won’t be the key to stopping a Giants team featuring Saquon Barkley. The Giants have skewed heavily toward the passing game this season, throwing the ball on over 67 percent of their plays from scrimmage, good for fourth highest in the league. Despite trotting out a decrepit Eli Manning at quarterback, I wouldn’t expect New York to suddenly pivot from their season-long strategy in a short week, and Barkley may end up doing a lot of his damage as a receiver — he has picked up more receiving yards than rushing yards in three out of the Giants’ five games this year.

The bigger story entering the game is the performance of the offense, and what exactly they can do (internally and externally) to get on track. The thirst for a big skill position trade is real, but if the Eagles don’t clean up their offensive line play it won’t matter if they eventually pull the trigger on a midseason deal. They need to keep Carson Wentz upright and healthy, and if they can’t do that against a Giants front seven that ranks dead last in the NFL in sacks, this season is going to go down the tubes in a hurry.

The Eagles may be able to recover if they somehow lose this one, but this city is going to be miserable if they drop to 2-4. I think this group is good enough to stop the bleeding and get back on track, even if I’m now skeptical of their long-term outlook this season.

I'm still a believer that this Eagles team can turn things around. They're minus-4 in takeaway/giveaways, which ranks near the bottom of the NFL. But, only two of their nine turnovers have been interceptions. They've fumbled an NFL-high 13 times & lost an NFL-high seven fumbles.

I think what ails the Eagles are correctable. I'm going to continue drinking the midnight-green Kool-aid--for now. The Eagles are the best of a bad NFC East. They get more things right than the listing Giants Thursday night.