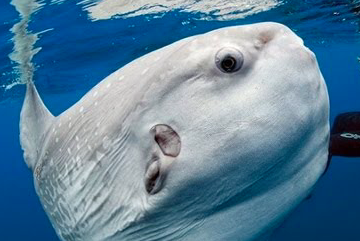 Diver gets up close and personal with a mola mola, also known as the ocean sunfish.

The year 2016 has been a strange one at the Jersey Shore.

A bunch of partiers trashed a Wildwood beach and the mayor — who's upset about Wildwood Crest potentially changing its name — blamed the debauchery on Millennials, obviously.

The shuttered Revel Casino, owned by irate Florida developer Glenn Straub, could not be reopened as expected due to engineers' fear of a literal s--t tsunami.

Along the same lines, there was supposedly a "meteotsunami" off the coast of New Jersey. Then the National Weather Service said nope, never mind, not a meteotsunami.

What else? An army of venomous clinging and stinging jellyfish invaded the waters along the coasts of Ocean and Monmouth counties. One man was hospitalized, events were canceled, and now, although likely unrelated, 19 beaches in the area are listed under water quality advisories due to elevated bacteria levels.

An FBI dive team conducted a top-secret search near an Ocean City fishing pier and left without any real explanation.

Lucy the Elephant launched a presidential campaign in Margate on her 135th birthday and that's the most normal thing here.

Justin Bieber had a signature "you mad bro?" moment when a fan in Atlantic City tried to give him a hat during a heartfelt speech.

Finally, the chlorophyll from a massive phytoplankton bloom turned the coastal waters of South Jersey bright turquoise for a few weeks, almost convincing shore travelers that they were in the Bahamas.

This brings us to our latest and greatest oddity: the mola mola fish discovered this week in Atlantic City.

According to the Press of Atlantic City, members of a family clamming operation inspected the corpse of a giant flat fish found floating in the bay. It was a mola mola, also known as an ocean sunfish, which can grow up to a leviathan 14 feet high, 10 feet long and 5,000 pounds.

If Nature.org says you're the weirdest fish in the ocean, that should be taken on authority. Female mola molas can lay up to 300 million eggs at a time — the most of any vertebrate on Earth — and they also have a strange rudder-like fin that folds in on itself. Most of the time, they're out on the open seas chasing jellyfish, salps, squid, and some crustaceans. They also never close their mouths because their teeth are fused together, somewhat resembling an oafish slack-jawed version of Vince McMahon in shock.

Good thing for humans, they're docile giants who have no interest in harming us.

There's no telling what happened to this perished mola mola, but it's highly possible that some bigger beast chomped off a little more than it could chew. RIP, mola mola. Thank you for keeping it weird.