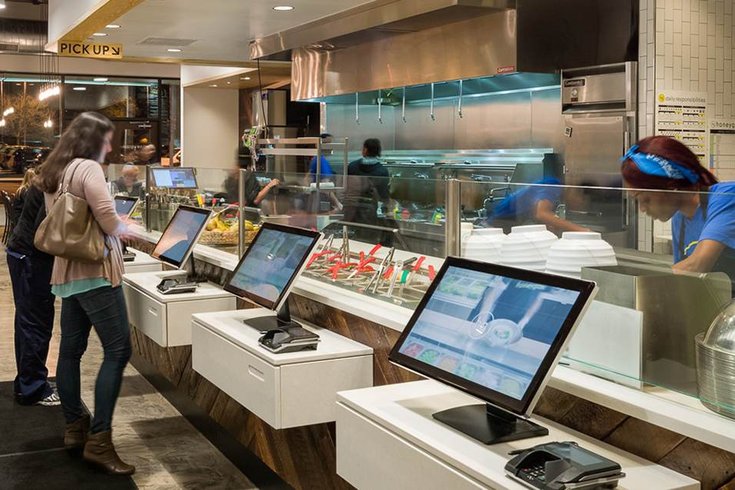 Honeygrow, a chain of fast-casual restaurants in the Philadelphia region, uses self-service stations in all of its eight locations, including this one in Wilmington.

And they both have a beef with the notion there’s necessarily a connection or that some employees might soon be in a pickle.

“It’s not specifically tied to raising the minimum wage,” said Wendy’s spokesman Bob Bertini. “This is primarily driven by consumer demand. Customers, particularly young customers like to be in control. They’re used to doing iPhones and tablets so they like the convenience of using kiosks. And it does help to mitigate some costs.”

But won’t those lowered costs come in the form of fewer employees or at least fewer hours for workers?

“I can’t speak to whether or not there is any savings related to the use of kiosks. Our lens is all around customer feedback, and whether or not customers like them.” – Lisa McComb, McDonald's spokeswoman

“It’s not safe to assume that at this point,” Bertini said. “We’re reviewing that now as part of the pilot test.”

For its part, McDonald’s won’t even say mitigating costs is the goal. A spokeswoman for the world’s largest fast food chain says it’s all about consumer experience.

“An assumption that their use is related to wage or staffing levels is not the case at McDonald’s,” said Lisa McComb. “Staff perform many functions in our restaurants beyond taking the orders, and in those restaurants testing kiosks, there is the ability for some staff to spend more time on hospitality, customer service and other functions. For example, in some restaurants we’re also testing table service, so that might be a function of an employee’s role.

“I can’t speak to whether or not there is any savings related to the use of kiosks,” she continued. “Our lens is all around customer feedback, and whether or not customers like them.”

Wendy’s pilot program began early this year in a “handful” of restaurants in Ohio, Bertini said.

“What we’ve heard so far is positive,” he added.

The program wasn’t something Wendy’s chose to put on the public menu.

“We didn’t put out a press release. It was an earnings call and the question was raised as to what are we doing to mitigate costs,” Bertini offered.

The plan now, he said, is to make the technology available by the end of the year on a voluntary basis to franchisees.

McDonald’s, meanwhile, is testing kiosks in “some remodeled restaurants across the country,” McComb said.

“At this point we’re gathering feedback from customers on their experience with the kiosks, so there’s no specific ‘next step’ per se,” she added.

The pilot programs for both chains are not being conducted in the Philadelphia area. But McDonald’s did provide a comment from Jorge Salvat, vice president of operations and franchising for the Philadelphia region. He said it really is all about customer service.

“Kiosks are designed to give our guests a modern and convenient opportunity to order at their own pace and try their own hand at personalizing their order. They also offer an alternative option for people to place their order during busy periods,” he said in the statement.

KIOSKS WORKING FOR ONE LOCAL CHAIN

Surprisingly, perhaps, a leader of a local effort to raise the minimum wage is not concerned with the potential of the self-service stations to eliminate workers' jobs or hours.

The Fight for $15 movement started in late 2012 with a few hundred fast food workers in New York City striking for $15 an hour and union rights. Today, according to its website, it’s an international movement in more than 300 cities on six continents of “fast-food workers, home health aides, child care teachers, airport workers, adjunct professors, retail employees – and underpaid workers everywhere.”

Jones, who works at a Popeye’s restaurant in South Philadelphia, expressed trust in at least one fast food giant leader.

“The CEO of McDonald’s already said there would be no elimination of jobs,” she offered.

One area restaurant group uses self-service stations in all of its locations to the satisfaction of its customers, a company official says.

Honeygrow – a Philadelphia-based chain of fast-casual restaurants started in 2012 – has self-serve kiosks at all eight of its locations in the region, including Center City, Bala Cynwyd and Wilmington.

Spokeswoman Jen Denis said the “technology-forward company” created its own system, rather than using an off-the-shelf one.

“We use this technology to empower our guests with ease of choice and customization as well as streamlining the ordering process,” she said. "Since we have created our own custom systems, costs are not the factor, as we have made significant investments in our technology.”

Honeygrow customers have reacted positively to the system, Denis added.

But Jones, for one, sees one downside to kiosks.

“Customers want to see a warm smile. That’s not something these automated services can do,” she said.