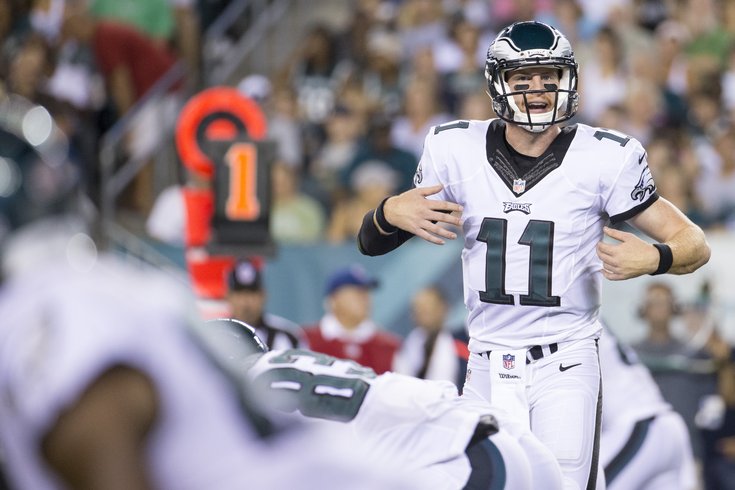 Philadelphia Eagles quarterback Carson Wentz signals to his teammates before going under center against the Tampa Bay Buccaneers.

It's not hard to imagine that the last 72 hours have been a bit of a whirlwind for Carson Wentz. In just a few short days, the rookie quarterback went from likely being inactive for the Eagles' season opener against the Browns to being the guy who will lead the offense this Sunday at the Linc.

And on his first day back to work following the holiday weekend, the Eagles new starting quarterback arrived at the NovaCare Complex before you were likely even awake.

What time did Wentz arrive for his first practice as Eagles starting QB?

But following the lightning-fast transition from Sam Bradford to Wentz, the 23-year-old has taken solace in the fact that his coaches and teammates, including (still) backup Chase Daniel, have shown they're confident in the young QB's ability, both as a player and as a leader. In fact, Daniel also arrived around 5:15 a.m. to join Wentz in the film room.

"It's huge [to have them behind me]," Wentz said on Wednesday following his first full practice after being named the starter. "Having the support from your teammates, from your coaches, going out there for practice every day and seeing those O-linemen just working with me and the communication, just everything's been great. So having that's important. Having this team behind me really elevates my confidence and that'll really help me on Sunday."

Despite coming from North Dakota State, an FCS school that hasn't produced a ton of NFL talent, Wentz doesn't think the NFL stage will be too big for him.

Listening to him speak, it's clear that Wentz isn't going to try to put the blinders on and just ignore the almost 70,000 screaming fans -- they're pretty hard to ignore. He was somewhat surprised by the large crowd that turned out for the open practices and got his first taste of Birds fans during his preseason debut.

But that's nothing compared to the kind of atmosphere that will be on display in South Philly this weekend. Nevertheless -- and perhaps because he hasn't seen how ugly it can get if the Eagles lose to a bad team, one like, say, the Browns -- Wentz is looking forward to playing in front of a raucous crowd.

Part of Wentz's "inherent confidence" comes from the fact that he played in some big games in college. But this will be on a whole different level.

"But you get into the course of the game; you get past one, two, three plays into the game and it settles in and it's football from there. You know, he's such a mature guy that I don't anticipate anything being too big for him going into this first game."

And that's exactly the approach Wentz is taking. The competition may be tougher. The stakes, higher. But on the field, it's more or less the same game he's been playing since he was a little kid.

"I'll be really excited [on Sunday], but like I said, once that kickoff happens, once we're playing ball, it's just football again," he added. "At the end of the day, I'll look back and realize just how special of a moment that really was for me."

In the meantime, Wentz is trying to put in as much work as he can in order to prepare for the Browns. Interestingly enough, the Browns originally held the No. 2 pick in this year's draft, but because they didn't project Wentz to be a top 20 QB in the NFL, they dealt the pick to the Eagles.

He's not focusing on that. Instead, he's trying to give the team that did draft him the best chance he can to begin the Doug Pederson era with a win.

"That's in the past," Wentz said when asked about the Browns passing up the opportunity to draft him. "I'm a very motivated individual the way it is, so I don't really have the need for extra motivation going into this one."

Wentz didn't get many reps this preseason with the first team, so heading into the opener, "every rep is huge," according to the rookie. But in the end, this is a league based on results. Wins and losses. It hardly rewards those on the losing side for simply putting forward an effort. If there was ever a case in which the process was more important than the result, it's this one -- a rookie QB from an FCS school starting his team's opener in its first year under a new coach.

Simply put, there are more than a few scenarios in which the Eagles could lose but Wentz still has what we would deem a successful debut. That, however, is not the kind of approach new starter is taking.

What does Carson Wentz think he needs to do in order to call his #Eagles debut a success?

And neither is his head coach.

"I think my expectations for the team are extremely high," Pederson added. "We need to win football games. Maybe the perception outside of the building is a little different but I don't believe in that expectation, which probably leads to, ‘Hey, young rookie quarterback, don't expect much this season’ that type -- that's not my expectation at all...

"My expectations is, ‘Hey, we want to win every game.’ That's everybody's expectation and to play at a high level each and every week."

We'll have to wait until 1 p.m. on Sunday to find out if that's wild optimism or a rational assessment.