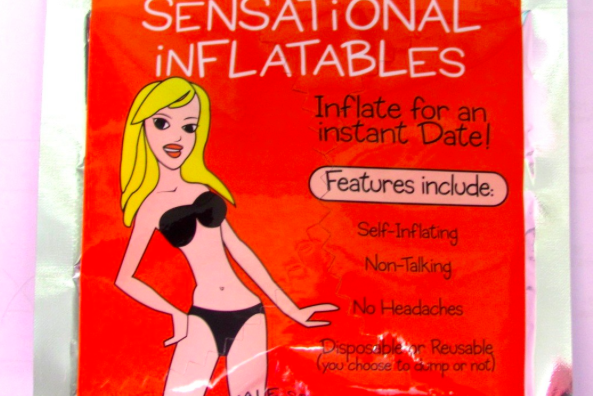 Weeks after students at West Chester University protested the sale of inflatable dolls at its bookstore, the company responsible for stocking the $7.99 "perfect female specimen" on shelves has issued a formal apology.

In an e-mail to all West Chester students and faculty, Donna Snyder, executive director at the Student Services, Inc. (SSI), acknowledged the company's poor judgment in selling the male and female dolls, which some students decried as sexist, The Delaware County Daily Times reports.

As the new director of SSI, I was very surprised and personally appalled that such an objectionable product was on our shelves. Since then I put measures into place that include a review of our current inventory and checks and balances to ensure such materials do not appear in the bookstore’s inventory in the future. SSI is here to serve the University. Having that merchandise certainly was not in the best interest of WCU or Student Services, Inc.

The dolls were deemed particularly offensive by students who noticed a discrepancy in how they're marketed on the packaging, according to The Daily Local. While the male and female dolls are both dubbed "non-talking" and "the perfect (male or female) specimen," the female doll is described as "no headaches." The male doll is simply touted as not smelly.

The university first said that the dolls were intended as a Valentines Day gag, but quickly issued an apology on Twitter on September 18 after removing four remaining female dolls from the bookstore. The male dolls had already sold out.

“As an educational institution, it is my hope that faculty and students will use this opportunity to teach about the roots and consequences of this type of prurient material and the objectification of women,” Weisenstein said in an e-mail to the West Chester community.

According to The Quad student newspaper, the dolls were first brought to the attention of the university after a student used it as an example of sexism in her Introduction to Women's Studies and Gender course.