The first installation will highlight the work of Shawn Theodore, whose 'Afromythology' pieces combine the history and imaginary future of African Americans 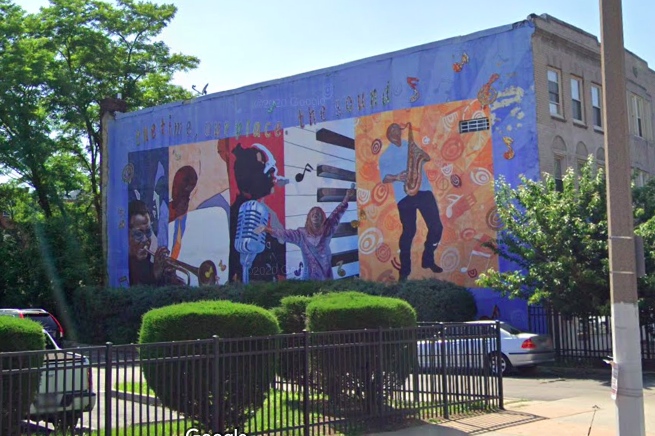 A collaboration with Mural Arts Philadelphia and the Ogontz Avenue Revitalization Corp. will bring a collection of murals to West Oak Lane. The first will be created by photographer Shawn Theodore and replace the mural pictured above, located at 7152 Ogontz Ave.

West Oak Lane is beautifying its streets and buildings thanks in part to a new partnership between Mural Arts Philadelphia and the neighborhood's Ogontz Avenue Revitalization Corp.

The organizations are collaborating on a series of murals celebrating the Northwest Philly community and its impacts on the city at large.

The first mural will replace an existing piece on the exterior side wall of the rowhome at 7152 Ogontz Ave., which borders the parking lot to the popular Southern restaurant Relish, according to plans released earlier this month.

The mural will feature work by award-winning photographer Shawn Theodore, whose work "opens broad conversations about the role of the photographer in the shaping of agency and imagery, engages in new forms of storytelling, and impacts the trajectory of the collective Black consciousness," according to Theodore's website.

A graduate of Temple University, Theodore is currently an MFA candidate in Savannah College of Art and Design's photography program. His work has been featured in galleries across Philadelphia and in several museums, including the African American Museum, The Barnes Foundation, and the Mennello Museum of American Art in Orlando, Florida.

Theodore largely is known for his work on what he calls "Afromythology," which combines the history and imaginary future of African American lives. A months-long exhibit of Theodore's work was featured at the Paradigm Gallery in Queen Village earlier this year. Titled "Night Stars," it included his "Afromythology" work as well as a portrait of poet Amanda Gorman, who performed at President Joe Biden's inauguration ceremony.

Work on the new mural will begin in April and the OARC will begin fundraising efforts to support the creation of public art across West Oak Lane.

"We are thrilled to team up with one of Philadelphia's most iconic programs," said Kimberly A. Lloyd, OARC president and CEO. "This partnership reflects our commitment to nurturing and promoting public art in the communities we serve. We are also very excited to work with artist Shawn Theodore, whose imagery and storytelling will reflect what we see in the community and surrounding areas of West Oak Lane."

Outside of its new investment in public art, OARC is known for its Jazz & Arts Festival, established in 2004 to help revitalize the West Oak Lane's commercial corridor. The OARC has praised the festival as a major influence on the development of the community and its growing population.

The festival brought an estimated 500,000 people to West Oak Lane to celebrate art and culture from 2004-2013. But OARC has not been able to host the event since 2013 due to funding concerns. Still, the organizations wants to bring the Festival back in 2023.

Though only Theodore's mural has been announced through the new collaboration, Mural Arts and OARC are expected to roll out additional projects in the months to come.

Mural Arts currently has at least four murals in process throughout the city, and recently unveiled a digital mosaic as part of Philadelphia's campaign to host the 2026 World Cup.

The project, named "Love of the Game," allows soccer fans to upload photos of themselves displaying their passion for the sport. A physical rendering will be constructed at Lincoln Financial Field if the city is chosen to host the game. Photos can be uploaded for use in the mosaic until February.