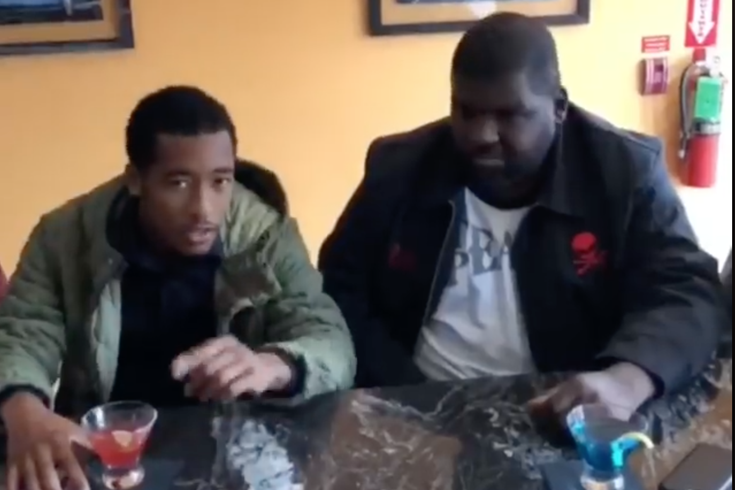 The call-to-action in Booker's PSA.

Election season can get ugly. Candidates sling accusations, both true and false. Opposite sides of the political aisle are at each other’s throats. Sometimes, you’re even threatened with golf cleats to the face.

But Booker’s Restaurant and Bar, which opened in January 2017 on Baltimore Avenue isn’t here for the vitriol. Instead, the West Philly spot cut its own pro-voting public service announcement a week before the midterms with one goal in mind: to get people engaged.

It’s superb, and I mean that without a hint of irony. I watched it five times in a row.

You should watch it right now:

There’s so much to love, and it all fits in a tight 60 seconds. It talks about voter apathy, the promise of American citizens’ right to vote for immigrants, and even makes reference to Octavio Catto, a black educator and civil rights activist from Philadelphia in the 19th century.

Catto fought for abolition and equal rights, joined the Franklin Institute, and was at the forefront of Philadelphia’s place in baseball’s Negro leagues. He was shot and killed on his way to vote in 1871; today, a memorial statue of the activist stands outside of City Hall.

I loved the video so much, I reached out to the restaurant's owner, Saba Tedla, to talk just a bit about their process:

PhillyVoice: Alright, so who all’s in this video, and how did it come to be?

Saba Tedla: “So there are two employees who work in the restaurant; one customer, Nazaret Teclesambet, who’s a regular; and Big Rube, who's a friend of Nazaret's.

“Nazaret, she’s always talking politics when she comes to the bar. And normally we’re like, you know, ‘Politics isn’t a good bar discussion!’

“But she inspired us when she said one day, ‘I’m getting tired of complaining. Everyone’s complaining. If you’re not willing to do anything, you shouldn’t be complaining.’ She was having this conversation in our bar, and we all sort of said, O, how do we incentivize voting?

“Especially with younger people. I think there’s a generation gap between the people who think their vote counts, and people who are discouraged. So we thought about how to spread awareness, and also a desire, to vote. And that's how we ended up making this video."

PV: How did Big Rube get involved?

ST: “So Nazaret knew him, and she decided to talk to him and eventually brought Big Rube into the equation. They proposed the idea for the event, and we liked it, so Big Rube’s going to be the featured chef for the restaurant on Election Day, and then we’ll have our discounts as well."

PV: What are you hoping people get from watching this PSA, and stopping by for food and drink?

ST: “We want people to go vote, and then come be with us to watch the results come in. Be a part of it. When [Trump] was elected, I woke up to it. I’d already went to bed. I want people to be engaged, be part of the event.

“For me, I’m a mother of two kids. I just want to make a difference for them. I can’t imagine if, by the time they’re adults, we don’t have a public health plan. That would be the saddest thing. For me, I’m thinking about them when I’m voting.”

Booker’s is offering half-off wine or 30 percent off food on Election Day if you wear your “I Voted” sticker. The kitchen is open from 5 to 10 p.m.