Origin of a threat: What is the 'Beta Uprising?' 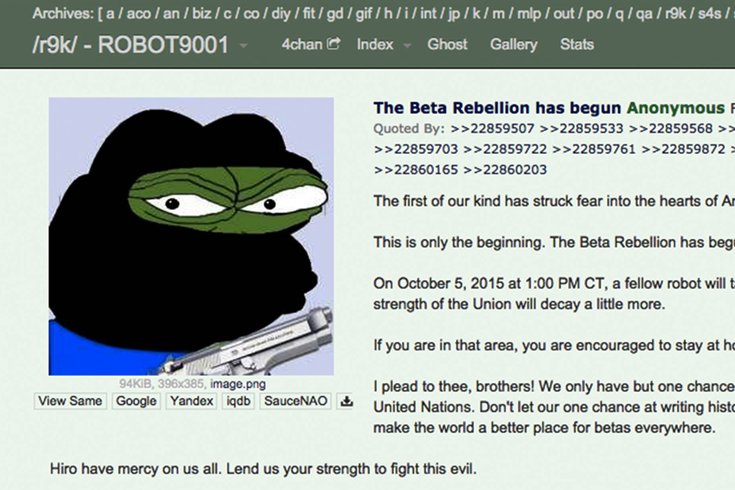 The 4chan message board post that begins "The Beta Rebellion has begun!" led the FBI to alert all colleges and universities in the Philadelphia area of a threatened attack for Monday. No incidents were reported.

At the beginning of an online thread posted Friday – which warned of impending violence to be brought against a Philadelphia-area university – was a drawing of a cartoon frog wearing a black mask and holding a handgun.

The image may seem trivial considering the severity of the threat made in the post; it seemingly referenced the fatal shooting at Umpqua Community College in Oregon at the hands of Chris Harper Mercer: "On October 5, 2015, at 1:00 PM CT, a fellow robot will take up arms against a university near Philadelphia. His cries will be heard, his victims will cower in fear, and the strength of the Union will decay a little more."

Yet the image does help to explain, not necessarily the origin of the threat, but the Internet subculture where it first appeared, which has become a center for those who feel cast out from the "normal" world.

The subculture is active on a message board called /r9k/ on the website 4chan, where the Philadelphia threat and a similar post possibly linked to Mercer were posted.

The /r9k/thread is populated by users who describe themselves as outcasts. They write mockingly of "normies" – or socially capable people integrated into society – and in some cases refer to themselves as "Betas," or males overlooked by women.

Most of the thread's content seems to be harmless, detailing the musings of the online community and the self-proclaimed exile from society (and relationships) of the "Betas."

Yet in the Philadelphia threat, the user took that idea a step further. The post, which prompted local colleges and students to remain on high alert Monday, references the "Beta Rebellion," saying that more "brothers" would be "martyrs" to its cause.

It also warned readers not go to school in the area and instead "watch the news as the chaos unfolds," mirroring a similar post that sparked an investigation regarding the Oregon shooting. According to the New York Times, that post read:

“Don’t go to school tomorrow if you are in the northwest.”

The Philadelphia threat held a similar warning, but just how credible is either? Considering the nature of 4chan, the Times points out, it's hard to say:

4chan is a sprawling, anonymous group of web forums, and 4chan users are not required to identify themselves, even with a user name. That makes the site a haven for the kind of people who are interested in declaring things anonymously on the Internet. Also, 4chan message threads often disappear after a few days, granting what’s said on the site a feeling of impermanence.

The line between legitimate and implausible is especially blurry on /r9k/.

The 4chan thread was started in 2008 by a cartoonist who was essentially sick of copycats when it came to memes, images, and other Internet content, according to The Daily Dot.

Randall Munroe created a "robot" moderator that stopped users from reposting others' content.

Since then, however, the thread has become a haven for people who consider themselves socially awkward and feel separated from the rest of society.

A scroll through the posts finds one user pondering how "normies" find partners for sex. Another claims there are a lack of alternatives for those who don't fit in today, unlike centuries ago when you could travel to the untamed American West, for example.

"Today there is nothing," the post reads. "If you're not a charismatic, confident, socially well-adjusted individual you are f***ed."

Posts like that are mixed with pages upon pages of stories concerning social awkwardness, with many of them related to sex (specifically their inability, or lack of desire, to have it). Many posts are characterized by a derogatory view of the appearance and value of women.

In addition to a focus on the role of women, a parallel disdain is present in many posts of "normies." One reply to a post, which actually condemned the idea of someone bringing violence against people due to women ignoring them, left the link to a YouTube video.

In the video, the narrator yells "f***ing normies get off my board."

Both the image in the video, and in the comment (which also reads "uprising intensifies!") is the picture of the aftermentioned frog, which is used frequently by the mostly anonymous users of the thread.

The frog called Pepe is the creation of cartoonist Matt Furie and originates from his 2008 comic "Boy's Club." Since Pepe was first published, it has taken off in popularity, used in countless memes shared by the likes of Katy Perry.

In an interview earlier this year with The Daily Dot, Furie said he embraced the use of Pepe, especially on 4chan where it first received notoriety among users:

I believe that the most important thing I can do as an artist is to protect the voices of anonymous people on the Internet and help ensure that that those voices are honored. It is my job to help 4chan have the experience that they want without judgment or criticism.

The anonymity that makes the website ideal for some is exactly what makes it problematic.

Mary Beth Williams of Salon wrote about the post that may be linked to Mercer as well as the Philadelphia threat and said that many commented on her articles saying that most 4chan posts were "jokes."

Williams took issue with that considering the tragedy in Oregon and other recent mass shootings.

Several replied, in many cases anonymously, to the Philadelphia threat, egging on the user, advising him or her on which gun to use and giving suggestions on how to carry out an attack. Williams argues that there's nothing funny about it:

I suppose the person who posted about planning an incident for Monday was joshing too, and that the eager supporters saying, “PLEASE be real,” “Make sure you got molotovs. it is really easy and painfully way to kill many normies. good luck even through you be kidding,” “Please be real try to beat [Virginia tech shooter Seung-Hui] cho’s highscore kill them all make them suffer,” or the one who posted a very specific and detailed “battle plan” are having fun. I don’t know, maybe it’s just not so funny when you’ve spent the past few years watching angry men, especially ones with a history of hatred toward women and minorities, going into public places and killing people.

The idea that most of what's posted on the thread shouldn't be taken seriously adds to the confusion over the threats. One Reddit user, attempting to explain the "Beta Rebellion," described it as "violent" uprising staged by males who feel ignored by women, but added that "it's a joke" and the shooting was probably someone who took it too seriously.

Someone who "took it seriously" is, at best, an understatement, considering that nine victims lost their lives in Oregon. What can't be overstated, however, is how seriously online threats are being taken by local and federal law enforcement agencies, a task complicated by the posters' anonymity and vague intentions.