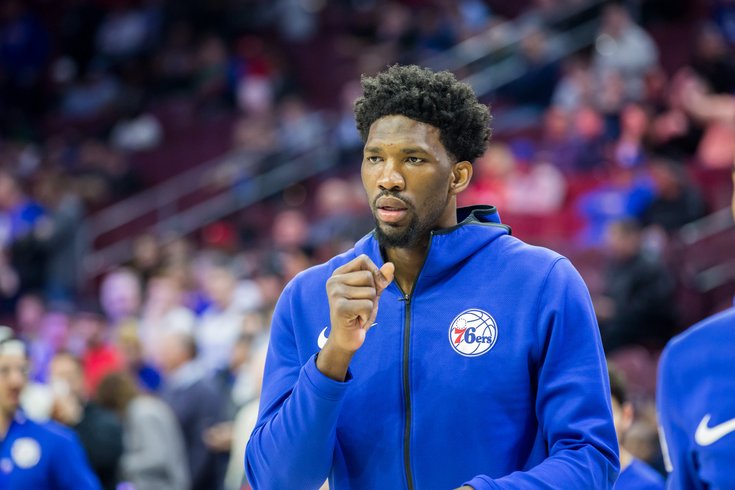 The Sixers open their 2017-18 season tonight in Washington with more excitement surrounding the team then there's been in over a decade – even though they're projected by most to finish in the middle of the Eastern Conference standings.

Will the young core be talented enough to make the playoffs? Depends on who you ask.

Here's a special Sixers predictions edition of What They're Saying, with a focus on where they'll be when the regular season ends.

According to Camerato, who has them finishing seventh in the East, it’s not just because of the Sixers improved roster.

The competition in the East got significantly weaker this offseason with the departures of Carmelo Anthony, Jimmy Butler, Paul George and Paul Millsap to the West. The Bulls, Pacers and, following the trade of Dwight Howard, the Hawks have seemingly dropped from playoff contention. That leaves room for three new teams to move up into the top eight.

As for Marshall Harris, he likes the team’s improved second-unit, which is basically last year’s team:

The reason the Sixers can still get to 39 games without the training wheels coming off Embiid? The Sixers' second unit is basically the starting unit that won way more games than most thought it would last year. T.J. McConnell, Dario Saric, Timothe-Luwawu Cabarrot, Fultz, Justin Anderson and Amir Johnson should make up one of the better (not to mention energized) benches in the NBA. Outside of Fultz they've all played starters' minutes, with McConnell and Saric showing plenty of mettle last season.  [nbcsports.com]

It's all about Embiid

Lowe, who also predicts that the Sixers will trade Jahlil Okafor to Chicago or Phoenix at some point this season, has them making the playoffs. Of course, as is the case with many of these predictions, that’s dependent on how many games Embiid plays.

Meanwhile, did you see Joel Embiid's preseason debut? Holy god. And remember: Philly had a positive scoring margin -- by a mile -- with Embiid on the floor last season. Right now, he's healthy. If he plays 50 games, the Sixers have a good shot at sneaking in. If he sniffs 60, we party.  [espn.com]

If Embiid stays healthy, there's no question this team is playoff-caliber. But they'll also have to overcome youth and a lack of experience.

Yes, young teams typically don't win a lot of games. Yes, we're dealing with major injury concerns for Joel Embiid and—to a lesser extent—Ben Simmons, who missed all of what would've been his rookie season with a foot fracture last year. Yes, turnovers are going to be a problem for Markelle Fultz and the other youngsters.

But just look back at those names. Fultz, Embiid and Simmons are as promising a core as you'll find in the NBA, and the Sixers already played like a 49.7-win team when its star center was on the floor last year, per NBA Math's FATS calculator.  [bleacherreport.com]

Living up to expectations?

Deveney has the Sixers making the playoffs as the seventh seed.

Two fascinating teams are behind [fifth-seed Milwaukee]: the Heat, who started 11-30 last year but finished 30-11, and the Sixers, loaded with talent but dealing with expectations that a young team like this can’t possibly meet.  [sportingnews.com]

Wong doesn’t have the Sixers making the postseason, losing out to the likes of Charlotte, Milwaukee and Brooklyn. But that makes sense considering he has Philly listed as one of his top-five (safest) over/under bets of the season – under 40.5 wins.

But he doesn’t think Embiid’s play is going to be the reason they fall short … assuming he stays on the court for more than 31 games this season.

We have no idea how many games Joel Embiid will play this season, but after suffering a meniscus tear in his left knee last January, and having played just 31 games since being drafted in 2014, no one is counting on the 23-year-old center to be fully healthy throughout the regular season. When Embiid was on the floor though, he was dominant, averaging 20.2 points, 7.8 rebounds and 2.5 blocks in 25.4 minutes per game last season. In his pre-season debut, Embiid had 22 points, seven rebounds, three assists and shot 18 free throws in 15 minutes. The per-36 numbers are going to be historical this season.  [sportsonearth.com]

They're just not ready yet

Even if Embiid stays healthy, there are other obstacles for the Sixers to overcome, according to Golliver.

9. Sixers: The NBA needs nothing more than Philadelphia, powered by sensational center Joel Embiid, to beat out Detroit for the No. 8 seed and a first-round date with Cleveland. Alas, Embiid’s track record of spotty availability and the Sixers’ overwhelming youth calls for caution. With or without Embiid, walking matchup nightmare Ben Simmons should be a leading candidate for Rookie of the Year.    [si.com]

Here are some that didn't quite fit into either of the first two categories.

•  USA TODAY had the Sixers finishing 38-44, which is good enough for the eighth spot in the east according to their predictions. However, they also have the Hornets finishing with the same record. I guess we’ll have to go to the tiebreaker…

•  Over at ProBasketballTalk, two out of three picked the Sixers to make the playoffs as the No. 8 seed, but neither seemed extremely confident in that choice.

Where do you think the Sixers will finish this season? Leave your predictions in the comments section below.