Who did each of the Eagles' rookie draft picks pattern their game after? 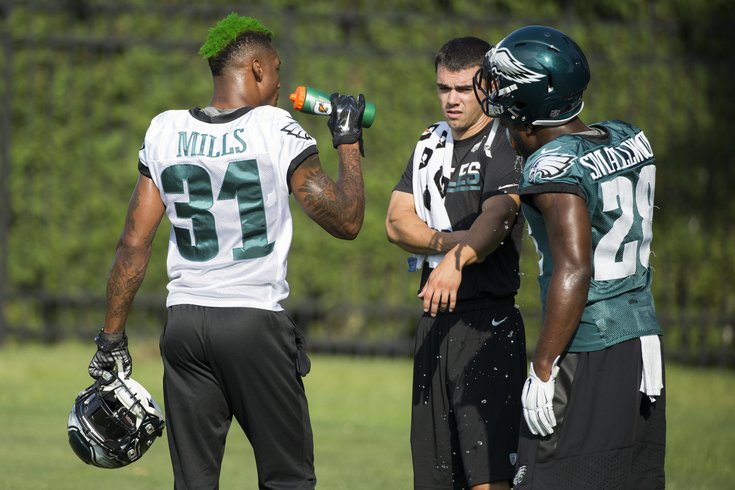 Jalen Mills and Wendell Smallwood both aimed high when patterning their game after NFL players.

We didn't re-ask Carson Wentz who he patterned his game after, because it's something he answered the day after he was drafted by the Eagles. Wentz named Brett Favre, Tom Brady, Cam Newton, and Aaron Rodgers.

"Offensive line work is just a lot of imitation. You look at what the best do and you try to copy that. Obviously, you have to look at their physical traits. Some guys are quicker. Some guys are strong and just kind of maul. I try to pick the guys who do it well, know what I'm good at, and even more so know what I'm not good at and work on that. Jason Kelce is obviously one of the best and has been for a while; guys like Alex Mack, Weston Richburg."

It's interesting that Seumalo named all centers.

"All the Eagles' running backs -- Westbrook, Buckhalter, and Duce, of course. Duce was a tough runner, a tough guy. B West, he just did it all for you. He fought for those extra yards for you. He was a fighter. I want to bring that kind of attitude to this team and this city. Buck was a backup, but he stepped into games and made plays when we needed him to. And I got his number (28). Most people say Adrian Peterson when they see my number, and I'll be like, nah, Buckhalter."

"Before I got to the NFL it was Tyron Smith, because I'm from Dallas. I was a big fan. He's my idol, along with Joe Thomas. Now that I'm here, more and more I'm looking at Lane Johnson, because his style fits what I like."

"I grew up watching Joe Haden. Joe Haden is a guy that's from my area, I trained with his dad, and know the family really well. That's one of the guys I grew up watching and kind of looked up to, setting the road for a lot of Maryland kids. He went to Florida and started as a freshman, he was a first round pick, and did nothing but perform. He definitely gave a lot of guys like myself hope, especially from the area."

"Rodney McLeod is a guy that, we actually went to rival high schools, so I've been watching him since I was younger too. Looking back at his career, he's a guy who has definitely proven himself as a player. He's aggressive, smart. We're players who are maybe a little undersized, but we're going to get the job done."

"With me going to LSU, it was Tyrann Mathieu. When we went to the National Championship, it was ridiculous. For sure, just growing up, I loved Charles Woodson, especially when he was at Michigan, just watching his highlights throughout junior high and stuff."

"Mario Williams, because he's another tall guy, used his length, and he does a dip too sometimes. And Jason Taylor, an older guy. I got the long arm (pass rush move) from him."

"I don't know if I have a single guy. Growing up, I... nevermind. I was just a fan of sports, to be honest with you."

Come on, Joe. Pick anyone. Just lie to me.