Who were the Eagles' favorite players growing up? 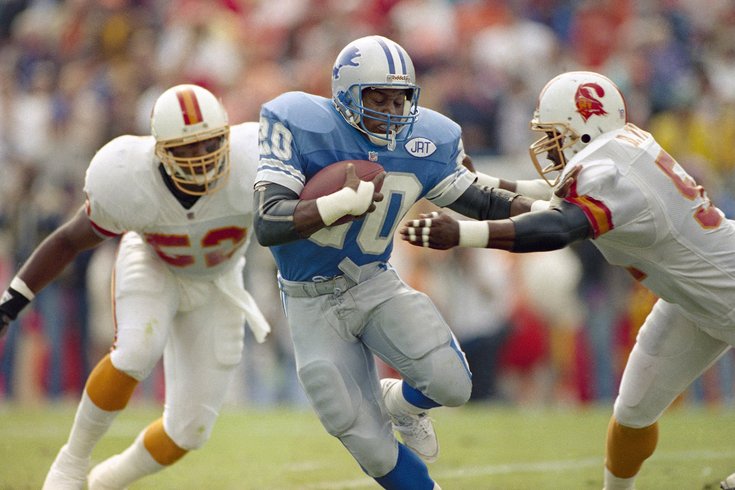 During the season, I asked 24 Eagles players (some possibly ex-Eagles players soon) who their favorite players growing up were. Their answers are below:

Guys who liked former Eagles QBs, but not the Eagles themselves

Jaylen Watkins: Donovan McNabb. I wasn’t an Eagles fan, but I was a McNabb fan. When I was younger I played quarterback in Pop Warner, and he was the first scrambling quarterback that I paid attention to. I had McNabb jerseys when I was little, and always wanted to be like him. I didn’t even like when people called me Vick. I was anti-Vick. It was because I didn’t like lefty quarterbacks, and McNabb was right-handed. I didn’t know of any other good right handed scrambling quarterbacks.

Guy who liked a former Eagle, because they, um, wore the same number

Fletcher Cox: Jeremiah Trotter, because we wore the same number. He was 54, I was 54.

Guy who liked former Eagles, because he was an Eagles fan

Vinny Curry: Brian Dawkins and Ricky Watters. And Reggie White. By the time I started watching football, Reggie was already gone from the Eagles, but the way he could just take over football games, he just dominated.

So young he named four players still in the league

Josh Huff: I had a few. Running back-wise, I would say Adrian Peterson. Receiver-wise, I’d say Andre Johnson, of course. Steve Smith. And Anquan Boldin. Johnson runs perfect routes, tough to bring down. Same for Anquan Boldin. He’s bigger, tough to bring down. And then Steve Smith, he just plays with fire. He’s a shorter receiver, my height, and not many people expected him to do much when he came into the league, and now he’s an All Pro receiver.

Evan Mathis: Jerry Rice, Deion Sanders, Emmitt Smith. I didn’t really have any love for linemen at the time because I was just a little kid.

Beau Allen: Brett Favre. My mom is from Wisconsin and she tried to raise me a Packer fan. I just respected the way he played the game. He played hard. He had that streak where he didn’t miss any games. After his dad died he went out there and had a great performance, which was pretty inspiring.

Brandon Boykin: Barry Sanders. I was a running back, and I just wanted to mimic his style, because he was so explosive and always made wild plays.

Bradley Fletcher: Barry Sanders. He was so quick, and changed direction so well. I just loved watching him play. I was a running back in high school.

Nate Allen: Barry Sanders. Growing up you always watch the offensive guys. He could just made people miss. Besides Walter Payton, I think he was the best in the game. He was the real deal. If you got in the open field with him, it was game over.

Darren Sproles: My favorite player was Barry Sanders. He made people miss. He could turn a five yard loss into a 20 yard gain.

Brandon Graham: Ray Lewis. I liked the tenacity he brought to the game. He was feared in the beginning of his career, for real. Towards the end you could see he started losing some steps. But my favorite was when he and Eddie George would go at it. I mean he made that boy quit. Ray Lewis. I wanted to be just like him, boy, you know just smacking people up the middle.

Malcolm Jenkins: My favorite player growing up was Ray Lewis. His enthusiasm and his leadership is something that, to me, even as a kid, just stood out as I watched him. I tried to emulate him in my game growing up. I played defensive back and receiver, but I always just gravitated toward him.

Jason Kelce: “Mike Alstott and Jerome Bettis were probably my two favorite players. They were really big powerful running backs. When I was growing up I was playing a little fullback and linebacker, so I kind of liked the way they played.

Brent Celek: Jerome Bettis. The way he ran played, the way he ran the ball. He just tried to run everyone over.

Note: Celek and Bettis don’t play the same position, but they definitely have the same running style.

The, wait… what? Jevon Kearse section?

Dennis Kelly: Jevon Kearse. I played defensive line. When I really got into football he came in his rookie year with the Titans and then came here (to Philly).

Cedric Thornton: Jevon Kearse. I was a Tennessee Titans fan. I grew up watching their whole defensive line. I liked his coach, who became my coach (Jim Washburn). I just liked the way they played.

Jeremy Maclin: Torry Holt. I think he was just a professional. He was right around the 6’0, 6’1 receiver range. Greatest Show on Turf, man.

Jeff Maehl: I’d probably say Randy Moss. He was really fun to watch, especially when he was young in Minnesota. Just catching all those deep balls, it was fun to watch, the way he went up and attacked it and took it away from people.

Casey Matthews: Eric Metcalf. He and my dad were always on the same team. And that’s why I wore 21 in high school and Pop Warner.

Smart enough not to give the wrong answer

Emmanuel Acho: Walter Payton. I was a running back early on. When I was a kid I think he was pretty much done, but just watching film on him, he was just the man. Otherwise, see I grew up in Dallas so I can’t really give the honest answer. Can’t do it, won’t do it.

Trey Burton: I was a huge Michael Vick, huge Brett Favre fan. Obviously I wasn’t anywhere close talented as Vick was, but I liked to look at myself when I played quarterback as a dual threat guy who could run around, and he was the poster athlete for that. And Favre, he’s the gunslinger. He could throw it any way. They push technique and form and all this stuff, but he didn’t care. He threw it his own special way. Unbelievable competitor, and obviously one of the best to ever play the game.