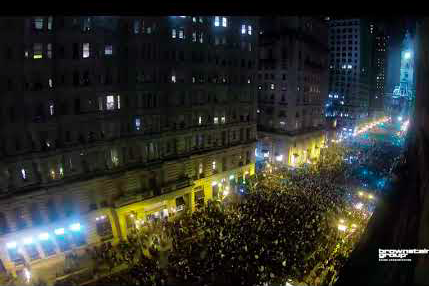 Eagles fans are out in full force on Thursday to revel in the city's first Super Bowl parade, a momentous party that snaked through Center City on its way to the Philadelphia Museum of Art.

We will all be reliving this past week for the rest of our days on Earth, let's not kid ourselves. This championship is as much about the people of Philadelphia as it is about the Eagles.

Anticipating a win last Sunday, local ad agency The Brownstein Group set up a camera above their office on Broad and Walnut Streets. They let it run for 15 hours as thousands of people packed the intersection.

All of that footage was condensed into one minute. Check it out below.