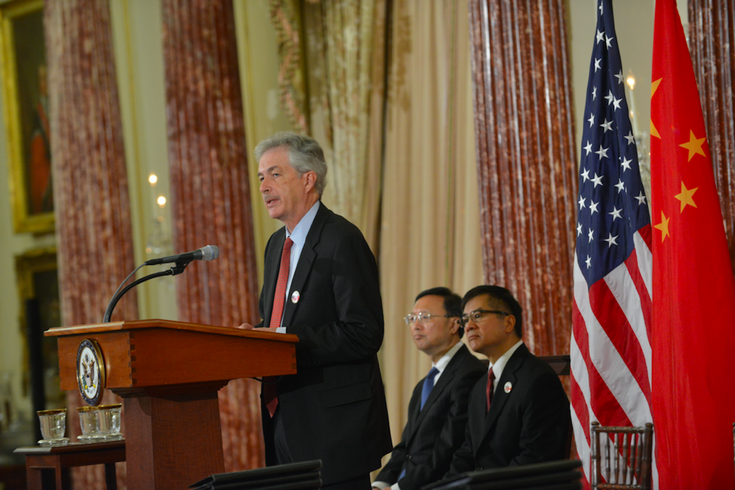 William Burns, speaking above in 2013, will bring 33 years of diplomatic experience to the CIA if his nomination by President-elect Joe Biden is confirmed.

President-elect Joe Biden has nominated veteran U.S. diplomat William Burns as the next director of the Central Intelligence Agency.

Burns, 64, a La Salle University alumnus, served in a variety of foreign roles over a 33-year career at the State Department, where he worked for both Democratic and Republican administrations. Most recently, Burns ran the Carnegie Endowment for International Peace.

"He knows how to lead — and lead with integrity," Biden said in a video announcing the nomination.

Though Burns has never served in an intelligence role — his highest position was deputy secretary of state — he has routinely worked with intelligence officials overseas and has been involved in complex negotiations on issues including nuclear non-proliferation in Iran and the state of democracy in Russia.

"I developed enormous respect for my colleagues in the CIA," Burns said. "I served with them in hard places around the world. I saw firsthand the courage and professionalism that they displayed and the sacrifices that their families made."

Burns graduated from La Salle in 1978, earning a degree in political science in the North Philadelphia college's honors program. He later received advanced degrees in international relations from Oxford University.

Upon his retirement from the State Department in 2014, Burns' La Salle teachers recalled him as an exceptional student.

"He was one of the best, if not the best student, I ever taught," said John Rossi, a history professor at La Salle for more than 40 years. "There was nothing he couldn’t do. His exams were letter perfect and brilliantly written. His handwriting was almost script and beautifully done. And he was very unassuming. You wouldn’t notice this (in him) until your first exposure to his work."

If confirmed, Burns will succeed Gina C. Haspel and take over a CIA that often has been at odds with President Donald Trump, who has cast doubt on the nation's so-called "deep state" intelligence community.

Burns has been critical of Trump's isolationist posture during the last four years, stressing the importance of international alliances and an apolitical intelligence apparatus.

"Good intelligence is the first-line defense for America — the indispensable basis for sound policy choices," Burns said. "I'll always do my best to deliver that intelligence with honesty and integrity, and without a hint of partisanship."