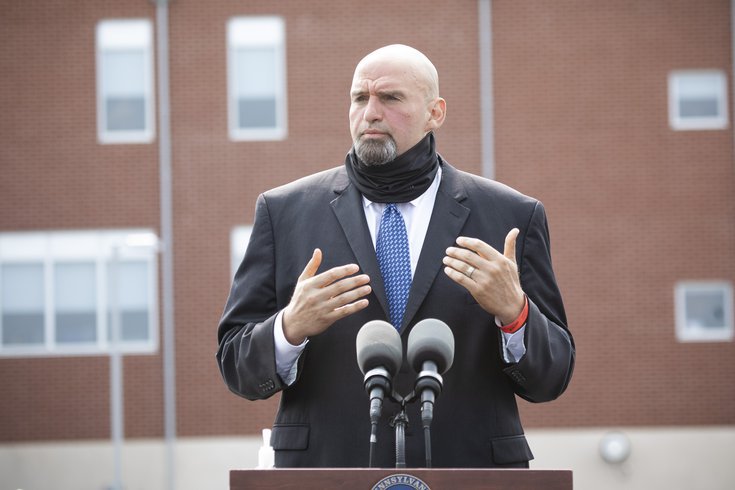 Pennsylvania Lt. Gov. John Fetterman has his sights set on the U.S. Senate in 2022. Sen. Pat Toomey, who has long favored term limits, said last fall that he will not seek a third term.

Pennsylvania Lt. Gov. John Fetterman will explore a run for the U.S. Senate seat set to be vacated by Pat Toomey in 2022.

On a campaign website launched Friday, Fetterman said he likes his chances.

"Pennsylvania will be the most important Senate race in 2022. We think we can win if we go for it," Fetterman wrote. "But before we decide to run, we want to know who's with us."

The site has begun collecting donations to get the campaign off the ground.

The former Braddock mayor and Harvard grad previously ran for the Senate in the 2016 Democratic primary, eventually falling to Katie McGinty in a race that also included Joe Sestak. McGinty was ultimately defeated by Toomey, who will not seek a third term based on his support for term limits.

Fetterman's profile rose in 2018 when he received an endorsement and vocal support from Vermont Sen. Bernie Sanders. Fetterrman, who was elected lieutenant governor that year, has served in an unusually visible role in the Wolf administration.

Over the past two years, much of Fetterman's focus has involved efforts to legalize and decriminalize recreational marijuana in Pennsylvania, where he and Gov. Tom Wolf argue the revenue could be used to uplift small businesses impacted by COVID-19.

The Pennsylvania race figure to be crowded in 2022 as candidates from both parties see an opportunity to leap at a viable seat in Congress.

Democrats regained a majority in the U.S. Senate this week with the Georgia runoff victories of Raphael Warnock and Joe Ossoff.

In 2022, Republicans are set to defend 22 Senate seats, compared to 12 among Democrats.