Lieutenant Gov. says it's time to 'get serious' about legalization 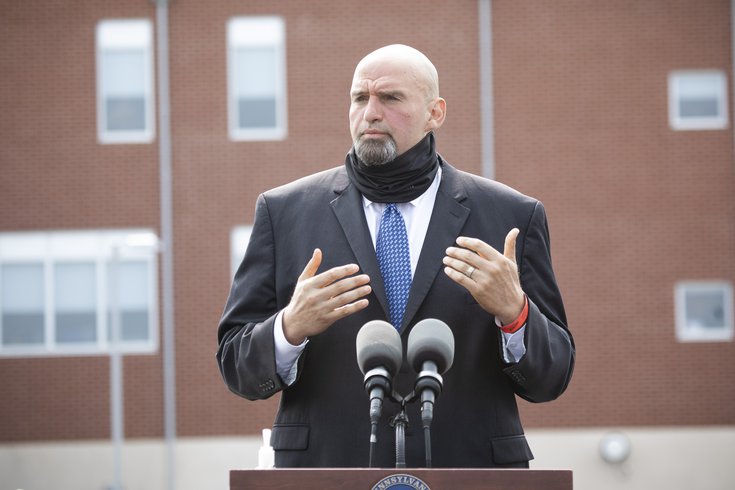 Pennsylvania Gov. Tom Wolf and Lt. Gov. John Fetterman have been in a full court press to legalize recreational marijuana over the past few weeks.

Last month, Wolf called on state lawmakers to bring him a bill that would direct revenue from legal marijuana to disadvantaged businesses impacted by the coronavirus pandemic. He also urged making restorative justice a priority for Pennsylvania communities that have been harmed by marijuana criminalization.

On Wednesday, Wolf and Fetterman participated in a Harrisburg event put on by marijuana advocacy group NORML.

Please join me and Lieutenant Governor John Fetterman as we provide an update on legalizing adult-use marijuana in Pennsylvania.

Fetterman, who has taken the lead on public outreach for marijuana reform, stressed that delaying legalization could put Pennsylvania at an economic disadvantage if New Jersey does so first and gets a head start.

Fetterman has called cannabis a "turnkey solution" for Pennsylvania and believes the issue should be framed in economic terms. The cannabis industry has weathered the pandemic well, bolstered by rising use of medical marijuana and optimism that fiscal problems will push more states toward legalization.

I'm with @FettermanLt to again ask the PA legislature to take action on adult-use marijuana.

Wolf echoed the belief that falling behind New Jersey to get the industry up and running in Pennsylvania would be a misstep.

"New Jersey citizens are going to vote in that referendum, and if they vote to legalize it, we will have given up the opportunity to gain the revenue that will definitely go across the border to New Jersey," Wolf said Wednesday.

Republican lawmakers, still warring with Wolf over COVID-19 policies, have not warmed to acting quickly on the idea. They refused to consider the matter before the pandemic, when Wolf called on the General Assembly last September to address decriminalization and seriously debate adult recreational use for residents over 21 years old.

"Like with any issue, a bill would need to work its way through the Senate Committee process to be vetted," Senate Majority Leader Jake Corman said earlier this month. "Movement on this issue should not be expected this fall."

Fetterman said Wednesday that it makes no sense for the state to wait.

"I don't understand why this is even an issue, especially during this pandemic," Fetterman said. "Let's get serious. Let's implement a serious policy that's going to address all of the areas that Pennsylvania needs addressed right now."

Eleven states and Washington, D.C. have fully legalized marijuana, while New Jersey and Arizona residents will vote on the issue in November.

Appealing to the familiar rivalry between Pennsylvania and New Jersey could be a good way for Wolf and Fetterman to build momentum. The administration's research suggests somewhere between 65 to 70% of Pennsylvania residents have expressed support for marijuana legalization.

“The decriminalization and legalization of adult-use cannabis are what the people of Pennsylvania want," Wolf said. “I urge the General Assembly to listen to them."