Over 300 flights were cancelled at PHL and SEPTA, NJ Transit and Amtrak axed much of their service 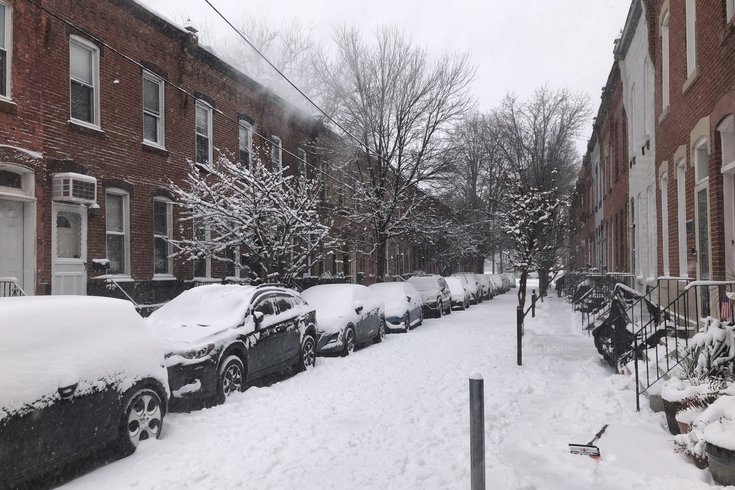 Snow piles up on a Philadelphia side street around 9:30 a.m. on Saturday morning. The winter weather led to a number of flights, trains and buses being canceled or delayed around the region.

With snow piling up across the Philadelphia area on Saturday morning, much of the region's air, train and bus service was cancelled.

At the Philadelphia International Airport, 306 flights were canceled and another 16 were delayed due to the inclement weather. That includes both incoming and outgoing planes.

Officials were canceling flights in the region proactively on Friday prior to the storm rolling in according to FOX29.

Amtrak also proactively canceled much of its Saturday service in the Philly area and the rest of the Northeast on Friday night.

SEPTA's bus routes 127, 128, 129, 130, 150 and 35 are not operating on Saturday due to the weather. Several of the agency's other routes are operating with truncated service or delays due to operator shortages.

NJ Transit has also axed much of its Saturday service. On the morning of the storm, all the agency's bus, River Line and Access Link paratransit service was canceled. Some service is expected to resume later in the day, but the paratransit won't be back until 3 a.m. on Sunday.

Snow emergencies were declared in both Philadelphia and New Jersey on Friday. Drivers in the region are asked to stay off the roads on Saturday.

At PHL, the National Weather Service is expecting between 2 and 4 inches of accumulation and wind gusts as high as 35 mph before the snow moved out of the area early Sunday morning.

The storm is more intense further east in places like Atlantic City, where NWS expects 3 to 7 inches of daytime accumulation. Some communities along the shore got over a foot of snow.