With a strong faith (and surgically repaired arm), Mark Appel is ready to prove himself 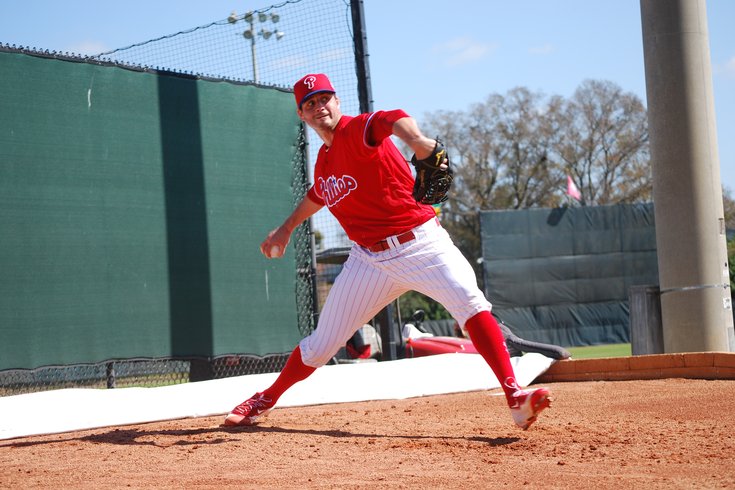 Mark Appel's first season in the Phillies system was limited to eight starts. He underwent surgery last June to have bone spurs removed from his right elbow.

CLEARWATER, Fla. – Perhaps it was long overdue, but when the Phillies decided to transition from trying to be a contending team to one hellbent on adding a bevy of promising prospects into their organization, the transformation of their Spring Training clubhouse was swift.

When camp opened a year ago, Cole Hamels, Chase Utley, Jonathan Papelbon, and many other accomplished veterans were gone. J.P. Crawford, Roman Quinn, Jorge Alfaro, and many other first-timers arrived into major league camp.

It’s an environment that makes it easy for a former No.1 overall pick to blend in, something that would likely have been impossible three or four years ago, even with all the proven, all-star big leaguers in occupying nearly every other locker stall. Heck, in another couple of weeks, when minor league camp opens, Mark Appel won’t even be the most popular former No.1 overall pick at the Carpenter Complex.

Perhaps it’s exactly the kind of environment that will allow Appel to flourish.

Of course, that line of thinking could have worked last year, too, when Appel had escaped the spotlight with of Houston, where he was selected with the first pick in the 2013 draft, and found a change of scenery with the Phillies. The 25-year-old Appel was acquired 14 months ago from the Astros in the same trade that brought Vince Velasquez aboard and sent Ken Giles westward.

But Appel’s first season in the Phillies organization lasted all of eight starts at Triple-A. First, there was shoulder trouble that landed him on the disabled list. Then, surgery to remove bone spurs from his gifted right elbow.

It was enough to deflate even the most confident and cocky of prospects, finding an opportunity at a second chance only for the first season to end abruptly before Memorial Day. Add on the internal and external pressures of a former No.1 overall pick – who had yet to reach the major leagues – and you’d expect the disappointment to be compounded.

But then you hear the 6-foot-5, 220-pound athlete speak and you wonder if you’re talking with the right pitcher.

“He’s a really positive guy,” Nola said. “You have to surround yourself with positive people.”

Appel was raised a Christian by his parents but began to embrace his own faith more and more after moving to California with his family as a pre-teen. His religion is now his guiding light, from his daily reading of the scripture to the texts he gets from the friends and family in his church community.

“I decided this was real and this is something I wanted to live by, this commitment,” Appel said at his locker stall in Clearwater, Fla., on Wednesday morning, before the Phillies second official workout of the spring. “From there, I didn’t know what that meant or what it was going to take me through … Instead of promising no struggles it’s on the flip side. You’re going to have struggles, but you’re going to have somebody to walk in the struggle with you.”

In an athletic endeavor, especially one with so much dead time as baseball, keeping the mind clear and sharp is nearly as important as having the physical tools to succeed. The power of Appel’s faith provides him with a unique perspective on the game and his place in it. 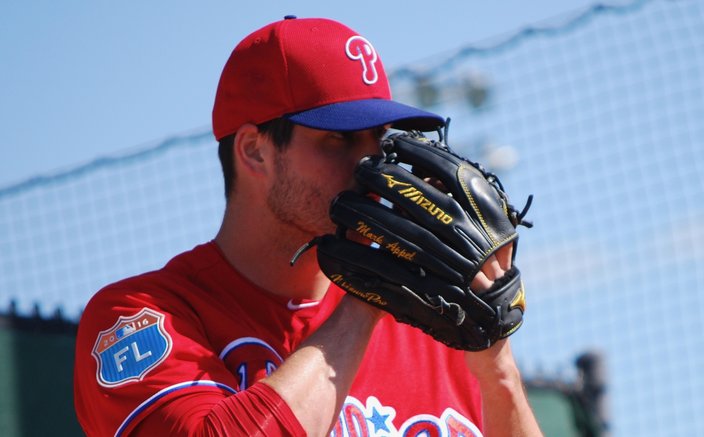 Appel, a former No.1 overall pick who is still awaiting his big league debut, relies on his faith in good times and bad. “I’m just going to live my life and be thankful to God’s word and be faithful to the things I need to do today and trust the Lord with the future, with where I’m going,” he said.

Before heading out with the rest of his teammates for morning stretch and playing catch, Appel reads passages from the Bible.

“I’ve got the bible on my phone,” Appel said. “It’s really easy, with technology it’s super convenient these days. But yeah, for me, there is no reason ever to not be hopeful in all circumstances, no matter how bleak things may look. Keeping it in perspective, things have been bleaker. Especially for much of the world that we live in today. But things can always be better, too.

“It’s kind of this balance, with things might not be as bad as they seem, things aren’t as good as they seem. So I’m just going to live my life and be thankful to God’s word and be faithful to the things I need to do today and trust the Lord with the future, with where I’m going.”

Appel understands that there’s a balance there, however. Just as he has the faith and trust in God, he also has been granted the freedom and responsibility to do the best with the life he’s been given. As a person, he said, that means caring for the poor, treating others with respect, and showing love to all people.

But how to that translate to fulfilling his potential as a pitching prospect?

His unique perspective offers clarity of mind. Paired with a surgically-repaired arm, perhaps Appel is on the path to realizing his talent.

After throwing his fourth bullpen session since arriving in Clearwater this winter, Appel has seen a noticeable difference in his delivery.

“I think a big thing for me, and really pitchers in general, is the amount of extension you get when you’re throwing the ball,” he said. “I think it helps with velocity, it helps with control, it helps just with the stress that goes through your elbow. When I had bone spurs, it really limited that range. I really physically couldn’t get that full extension. And now through the rehab process, I’ve been able to increase my range of motion. … The last two bullpens I’ve thrown is probably the best I’ve felt since before the surgery.”

Appel initially was sidelined early last season with a shoulder strain. He said he had symptoms of elbow discomfort, “for two to three years” but thought it was “just normal pitcher stuff.”

“It was something that was becoming more and more frequent so we took a look at it, did all the necessary steps, and ended up finding out I had some bone spurs in there and had to have surgery,” Appel said.

“I don’t want to get too high, but I am excited for this spring and just excited to be healthy again,” he said. “I feel like I haven’t gotten the chance to prove myself, being hurt.”

Appel can find constant comfort in his faith. He can pick up his phone, read a verse, and keep his mind focused on the words he lives by and not affected by the near-constant distractions that can play with the head of a 20-something professional athlete.

Or he can just grab his glove.

“Romans 12:2” is stitched on the outer, thumb side of Appel’s black and gold glove. 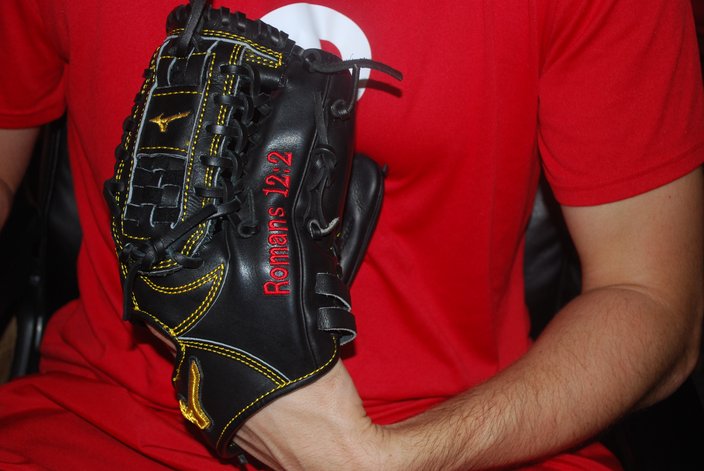 Inscribed on Mark Appel's glove is his favorite bible verse, Romans 12:2: “Do not conform to the pattern of this world, but be transformed by the renewing of your mind. Then you will be able to test and approve what God’s will is—his good, pleasing and perfect will.”

“It really changes my perspective on a lot of things,” Appel said of his faith. “I try not to see things in the world the way society sees them. I mean the verse on my glove, right here, Romans 12:2 says ‘Do not conform to the ways of this world but be transformed by the renewing of your mind,’ basically so you can know what God’s will is for your life. The first part is to not conform: we don’t have to live how society says is the right way to live.

“And then ‘be transformed by the renewing of your mind’ (means) that the way you think about things really matters, and how you see just different circumstances and things in your life that come your way, you see how those things matter, and it changes how you view those things.”

Appel will enter the season competing for a job in a competitive Triple-A Lehigh Valley rotation. But after being put on the 40-man roster in November and closing in on his 26th birthday, regular, positive results (something he’s struggled with as a pro) and a graduation to the big leagues will be expected, too.

Maybe the power of Appel’s faith – coupled with a healthy arm – will provide him with just the kind of unique outlook on life and the game of baseball that will allow him to thrive in 2017.