Wolf plans to veto bill that would end 'last in, last out' for teacher layoffs 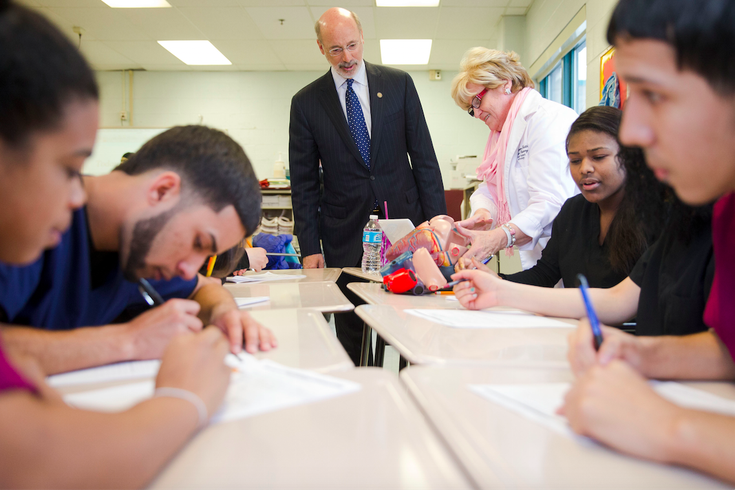 Pennsylvania Gov. Tom Wolf is expected to veto legislation that would end the state's policy of laying off teachers based on seniority and establish in its place a performance rating system.

House Bill 805, sponsored by state Rep. Stephen Bloom, calls for a system of statewide observations that would rate teachers at four classifications: "distinguished," "proficient," "needs improvement" and "failing." In the event of layoffs, the amended Public School Code of 1949 would require consideration of teachers' ratings before using seniority as a basis for shielding the most tenured educators.

"Research demonstrates that under a seniority-based layoff system, the more effective teacher is dismissed roughly four out of five times," Bloom wrote in a February 2015 memorandum. "We need only look to the Pittsburgh Public Schools, where in 2012, 16 'distinguished' teachers were furloughed because of this outdated state law. While seniority-based layoffs push effective teachers out of the classroom, 11 states – including Pennsylvania – still require seniority to be the sole factor that determines layoffs."

Wolf's office issued a memo Tuesday explaining that the decision to veto the bill is based on a belief that it was "passed prematurely" and "does not address the broader issues at play with our evaluation and testing systems."

"The focus of our policies should not be on how to conduct mass layoffs – it should be about how to invest in our schools," the memo says.

A combination of funding cuts and budget politics have placed strain on publicly funded schools statewide for much of the past five years. Wolf argues that passing Bloom's bill is unnecessary because school districts already have tools to get rid of underperforming teachers based on evaluations. Given an emerging consensus among state legislators that high-stakes tests like the Keystone exams need more refinement, Wolf contends that tying educators' fates to the outcomes of such tests could lead to an inconsistent teacher evaluation system.

"At a time when there is bipartisan agreement that we need to reduce our reliance on this type of testing, we should not use these scores as a benchmark for teacher quality."

As the School District of Philadelphia moves to hire 800 new teachers in time for the 2016-17 school year, the effects of Bloom's bill would, at a minimum, have helped address the problem of seniority among the city's "ghost teachers."

As Watchdog.org recently revealed, 16 Philadelphia public school teachers received $1.5 million during the current school year — and 18 teachers received $1.7 million in the previous school year — without teaching a single class. The practice allows "release time" or "official time" for public school teachers to perform administrative work for the Philadelphia Federation of Teachers while still earning a salary, benefits, pension and seniority. A lawsuit filed by the Fairness Center in Commonwealth Court is now in the appeals process, while a second lawsuit in Allentown is in its initial pleadings.

After a nearly nine-month budget impasse was resolved in March, Wolf's approval rating in Pennsylvania sits at 36 percent, according to a recent Quinnipiac poll. His office says it will continue to work with state legislators on a broader education bill.

"The governor will continue working with the legislature to develop a comprehensive accountability system that ensures our children are learning the skills they need to succeed and educators are qualified and accountable."