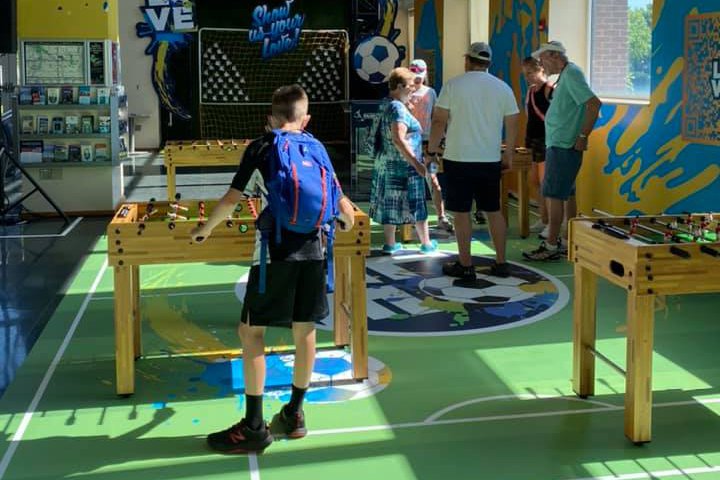 Philadelphia's bid to host World Cup soccer matches in 2026 comes to life in a new exhibit at the Independence Visitor Center. The exhibit is free and will be open through the end of October.

Follow the giant soccer balls hanging from the ceiling of the Independence Visitor Center and you'll find the Philadelphia Soccer 2026 Pitch, a new interactive exhibit created to rally support for Philadelphia's bid to host World Cup matches at Lincoln Financial Field in 2026.

The Pitch will serve as a home for activities related to Philly's ongoing effort to be one of the 10 U.S. cities hosting World Cup matches when the men's tournament returns to the country for the first time since 1994. Bid committee chair David L. Cohen on Tuesday outlined some of the city's selling points – including its walkability and public transportation – and said the new exhibit will help put the community's passion for the beautiful game on display.

"We see this as one of the best ways that our community can show FIFA and U.S. Soccer how much we want to host the World Cup in 2026," said Cohen, a senior advisor to the CEO of Comcast Corporation.

Only time will tell if FIFA decides to play some portion of one of the biggest sporting events in the world in Philadelphia. In January, the association said it planned to appoint host cities "by the last quarter of 2021." Matches will also be held in Canada and Mexico.

The Pitch boasts foosball tables, and visitors can take part in soccer challenges. It also includes areas for fans to leave notes in support of bringing the World Cup to Philly, as well places to leave memorabilia documenting the city's history with the sport.

"From the late 19th century on, our city neighborhoods have been animated by soccer clubs, with the heart of soccer’s history in Kensington, where immigrants working in mills and factories often played between shifts," Kenney said. "Now we see soccer played in West Philadelphia, at FDR Park, along the river wards and truly in every neighborhood of this city."

Had a great time at the “Pitch” kickoff event today at the @PHLVisitorCntr as part of our city’s @July4thPhilly celebrations. Make sure to visit this new, dynamic space and learn more about Philadelphia’s bid to host the World Cup in 2026. https://t.co/Oq0oZXMtuo pic.twitter.com/mL3zDAQvoP

The Philadelphia Soccer 2026 Pitch will be open until Oct. 31 at the Independence Visitor Center.

In other efforts to bolster Philadelphia's chances at landing World Cup matches, Wawa announced earlier this month that its new store at the foot of the Platt Memorial Bridge will be the site of a digital billboard supporting Philadelphia's World Cup bid. The location of that store, which is also the only Wawa in the city to sell beer, makes it among the first places travelers see when driving from Philadelphia International Airport into the city.