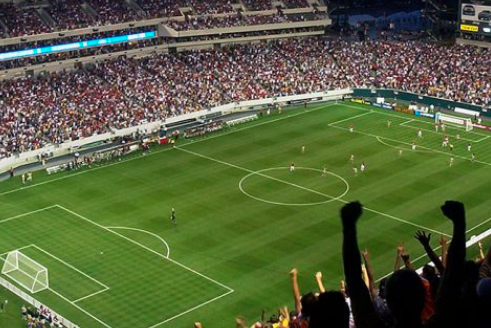 Philadelphia has officially launched its bid to be among the U.S. cities to host matches during the 2026 FIFA World Cup, touting Lincoln Financial Field as a prime venue for the tournament.

The city is among 17 U.S. finalists vying for 10 spots to host in a process that will be completed some time next year. Matches also will be held in Canada and Mexico.

A virtual presentation on Friday will be led by bid committee chair and Comcast CEO David L. Cohen, who will be joined by other Philadelphia leaders to make the city's case.

The bid will tout Philadelphia's recent success hosting large events, from the World Meeting of Families in 2015 to the 2016 Democratic National Convention and the 2017 NFL Draft.

The 2026 World Cup will be the first time the event is held on U.S. soil since 1994, when Brazil defeated Italy in the Rose Bowl in Pasadena, California. Other venues that year included Giants Stadium in East Rutherford, Soldier Field in Chicago, the Citrus Bowl in Orlando and Foxboro Stadium outside Boston.

In the past, the Linc has hosted soccer events including the CONCACAF Gold Cup, the Copa America Centenario, the FIFA Women’s World Cup, the USWNT Victory Tour and the USMNT, USWNT and International Friendlies.

Last year, Philadelphia was selected by MLB to host the 2026 All-Star Game at Citizens Bank Park, marking the nation's 250th birthday, and making for a potentially busy summer in the city should it be chosen as a World Cup site as well.

The 2022 FIFA World Cup is scheduled to take place in Qatar, the smallest nation by area ever to be awarded the event.

Fans can pledge their support for Philadelphia's 2026 bid at a website the city created for its campaign.