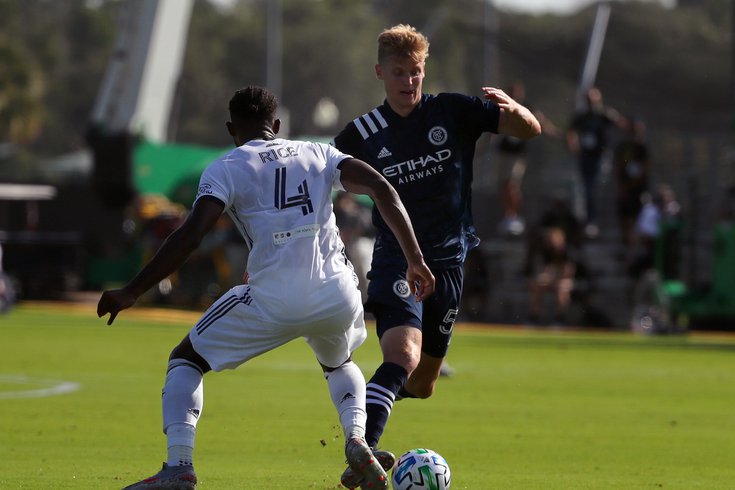 The Philadelphia Union took the field for the first time in four months on Thursday, returning with strong statement in support of Black Lives Matter and victims of police brutality.

After a pre-game moment of silence before Thursday's 1-0 win over New York City Football Club, Union players gathered in Black Lives Matter warm-ups. When they removed their shirts, they turned around to reveal that the last names on their jerseys were victims of police killings, including George Floyd, Breonna Taylor, Eric Garner, Tamir Rice and Philando Castile.

Our players stand together. One name too many. pic.twitter.com/tPoR8DWveN

Below the players' numbers was a patch that read "One name, too many."

Philadelphia Union players are wearing jerseys with the names of members of the Black community who lost their lives to police brutality. pic.twitter.com/Q3K7hVrkoh

And Alejandro Bedoya, who scored the lone goal in the Union win, wore this modified captain's arm band that included the names of Black people who were killed by police officers.

Philadelphia Union captain Alejandro Bedoya will wear this armband during the MLS is Back Tournament.

The demonstration came a day after after a similar display from other MLS players in the league's first match between Inter Miami and Orlando City SC, when more than 100 members of the Black Players for Change organization demonstration on the field.

The MLS has returned for a World Cup-style tournament as a resolution to the season that was suspended due to the coronavirus pandemic.

As Brotherly Game pointed out Thursday, it's unclear whether the Union were permitted by the MLS to wear the modified jerseys.

In recent years, after a string of mass shootings in the U.S., Bedoya has loudly advocated for gun reform. Following massacres in Texas and Ohio, he picked up a live microphone after a scoring a goal and shouted, "Hey Congress, let's do something now! End gun violence!"

Philadelphia Union soccer player Alejandro Bedoya scores a goal in tonight's game against D.C. United, runs over to a field microphone and shouts, "Congress, do something now. End gun violence."
Via FS1 pic.twitter.com/7WH4PA08cs

Other Union players, including Mark McKenzie and Ray Gaddis, are vocal members of the Black Players for Change organization.

The group has urged MLS to increase diversity in coaching, front office and executive jobs, to hire a chief diversity officer and to integrate implicit bias training.

“Really this protest is about fighting for racial equality and human rights,” organizer Justin Morrow of Toronto FC told the Associated Press. “We’re standing with all of our brothers and sisters across the world — definitely across the North American sports landscape.”